I slept in, enjoying the comfort of the Radisson on the edge of downtown Cancun. None of that hotel zone stuff for me. I'm a city girl.

Plus I could use my Radisson points here, making my stay free. And at least it wasn't raining this time, as it had been when I'd been through one night in January, 2010. I'd been en route from a city I'm not supposed to mention back to New York, and was glad to have a night in Cancun to sleep off the overstimulation of a certain small country between Miami and Cancun.

The only problem was the hotel's wifi drove me batshit for the first 18 hours I was there, until I complained in a ferocious uncaffeinated whir—the room service guys hadn't collected my breakfast door slip. Between being pissed off about food and coffee and being timed out off the internet every five minutes, I was pretty grumpy.

Eventually, after the world's most boring breakfast (remember, I'm still off sugar including all fruits and breads, and I am seriously craving a banana), a man with a laptop and router privileges showed up and worked some Internet juju on the router.

Which was great. It was speeding along reasonably well as I sat there working on my Thor project, until the housekeeper called. She was sick of waiting. I had to make a Skype call at 12:30, but is was not quite noon yet, so I figured I'd take my laptop to the business center and make my call there.

But the signal didn't read, almost at all. I think it was the position or composition of the wall. In a panic, I rushed back to my room at 12:20. The housekeeper would live.

She had the TV on loudly in the room, which I hate, and she did everything loudly. Fluffed pillows with fury. Followed towels with anger. I think she was pissed at me for coming back. She finally left just a few minutes before I made my call.

And the wifi was back to cutting off every few minutes. 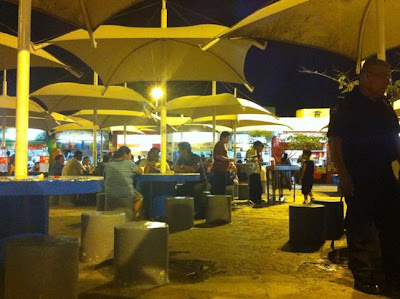 Completely embarassing. My interviewee, a VFX supervisor, took it in good stride that I kept calling him back. I'd call, get in a stream of interview, then suddenly Skype was gone. I called again and got him, then my calls quite going through. I called his cell, and here's the thing...he's a Visual Effects guy. He's not exactly a computer novice. "Would it help if I got on Skype too?" I'd been calling actual phones rather than asking executives to sign onto Skype. He got on Skype and we managed to get through another ten minutes before his job interrupted, not the Radisson this time.

For the next guy, the number one guy overseeing the whole movie, I had to quit after one try. My colleague Stuart in Brooklyn had to take over. Dejected, I went over to the taco stands in the city park for a while.

I had it worked out by the time I got an unexpected text from the Costume Designer at 11 PM though. I ran down to the lobby, then out by the pool before firing up Skype. The signal itself had the same number of bars, but nothing cut off.

Mosquitoes ate my ankles, but I got my interview.