Meanwhile Back on the Ranch

I pulled into JC late Saturday night, dropped my rental car off in the mall parking lot, placed the keys in the night deposit slot, and hoofed it the three blocks home. The weather was appallingly hot and humid, but I'd had a delightful trip up north, visited with several friends, and my houseguests were in a hotel for the night.

Perfect. Or almost perfect. If the deli were still open for me to buy a spinach salad, then it would have been perfect.

Sunday was also brutally hot, but not so hot that I wouldn't leave my house for free food when Roberta asked if I wanted to go to the mini-golf artist's opening.

We headed over, partook of the burgers and free Mr. Softee, and chatted with some of the creators of the mini-golf course.

Here's a look at some of the installations. 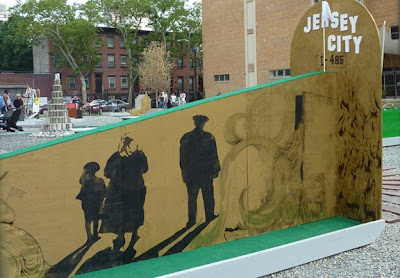 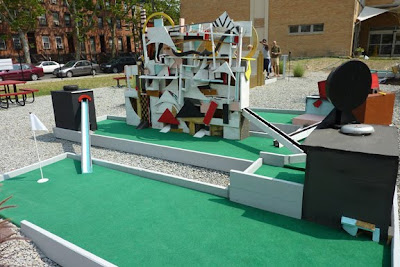 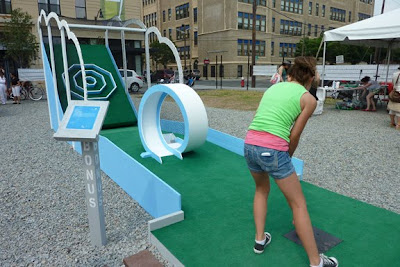 Posted by Marie Javins at 11:17 AM No comments:

This scared me, because while I have no problem careening along in a foreign country without a net, the simple weekender of going to see friends domestically is outside of my comfort zone.

I am aware that this is inherently ridiculous. But it's been a long time since I did something as simple as drop in on friends in another state.

I had lunch in Massachusetts with my friend Sarah, then headed up to see Ursula in her NH beach town. I explained to anyone who asked that I was coming out of my cave, testing coming out of hibernation. And they all said the same thing.

"But you travel all the time."

I'm used to that other type of travel. This type isn't something I do much of. And so far, we've won cheap skeeball prizes and strolled along a semi-skanky beachfront. 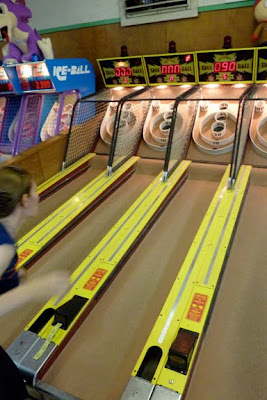 I was a little less awful at robot school last night. I can solder okay, so attaching the motors to the wheels and the little wires to the motors didn't go as poorly as when I have to make sense of schematics.

Of course, it does seem a little strange that all the wires here on the wheels are red. I am going to have a very special robot. 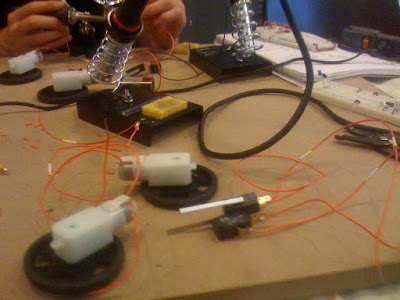 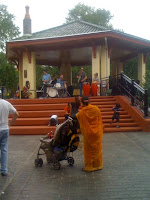 Last Saturday, I thought I'd go to yoga class.

"I'll just stop by the festival in Hamilton Park for a minute on my way," I thought.

I ran into Roberta, and we gabbed on a park bench. Then I saw Alex, who I hadn't seen since the mid-nineties at Marvel. I bought a cookie, gave half to Denise's kid, wandered around with Alex and Denise, then just Denise, then ran into Tom, and at some point, yoga was long past. Plus I'd eaten part of a cookie, which kind of defeats the entire point of yoga anyway.

But it was peanut butter. So that's probably okay. Nuts are good for you, right?

I spent the whole day in Hamilton Park, which is a wonderful place that just re-opened after renovations. I live in Yancey's apartment, but when he finally returns, he's going to have to pry me out of here with a bulldozer. I'm not going anywhere (besides for a trip, I mean). Unless it's somewhere else on Hamilton Park, which is a mid-1800s residential square of brownstones and trees. The renovations include tennis courts, dog runs, a water spray park, a playground, basketball court, and gazebo. What would it take to lure me out of here and back to Manhattan? A lot. And a lot of money to get a similar set-up.

But why, I wondered, is it called Hamilton Park? Is it after Alexander Hamilton, who lost his life in nearby Weehawken in 1804?

I grabbed my Encyclopedia of New Jersey and turned to the H section.

Google turned up a totally different Hamilton Park. In Weehawken. Where there is a monument to Alexander Hamilton that includes a bust and his "death rock." 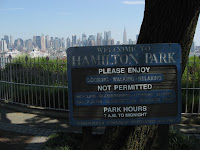 This morning, I set out to clean my garage. But at the last minute, I turned the wheel on Henry the 1990 Ford Taurus and headed north to Weehawken.

Here's is what we saw at Hamilton Park, Weehawken, which is located on the cliff above the actual duel spot. The rock is the actual rock Burr used to hit Hamilton on the head on July 11, 1804.* 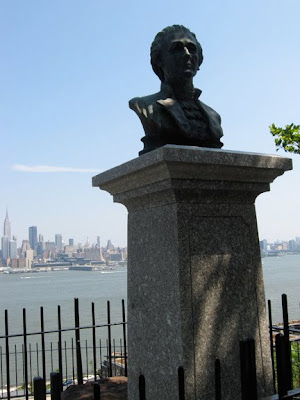 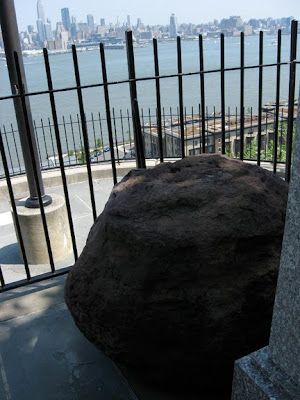 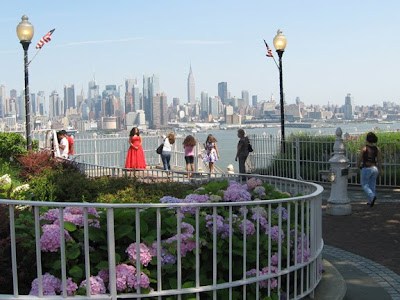 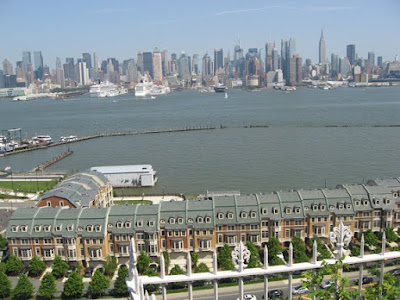 *The Encyclopedia of New Jersey, which is a fine reference source, had some other story about this rock. I don't know. Go read it.
Posted by Marie Javins at 7:24 PM 2 comments: 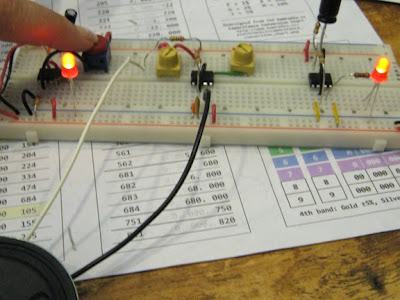 For someone who is pretty good at taking stuff apart and having it still work once I've gotten it back together, I am shocked at how terrible I am at robot school.

Sure, I can make a circuit. I can get an LED to light up.

So long as the teacher is sitting right next to me.

I feel like being a robot school dropout at least once each class. But it's fun, so I persevere in spite of my ineptitude.
Posted by Marie Javins at 8:43 AM 2 comments:

I like the idea of Strip Passport, the game in which you have to use your passport stamps to remain clothed, but the problem with it is that I don't really want to see most of my friends naked.

No matter. I've developed a new scheme--virtual strip passport. This way, the losers can take off their clothes in their own homes. I don't even have to turn on the video part of Skype. I'll just pretend I did.

Here are my last ten year's worth of passports. I'm still working on the decade before that, and I'm not sure where my first passport is.

2001-2010, the big one. Which means it takes a while to load. I had to go to the back, then scroll back to the front to make the damn thing load right.

2001, a little one I used when my big one was off collecting visas. 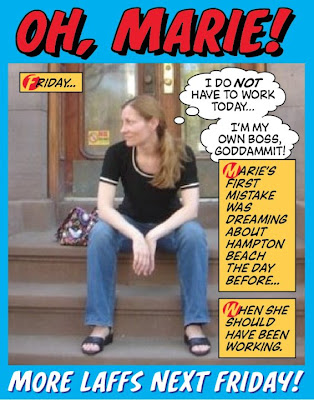 Photo by Shannon Wheeler. Lettering/design by Richard Starkings of Comicraft.

Story by the hive mind of a certain prominent social networking site.
Posted by Marie Javins at 11:50 AM 1 comment:

My new passport is here! It's 52 pages (deluxe-sized by request) and a little heavy, with a chip in it that I cannot see.

What a relief. I know it's irrational, but I felt a little naked without it.

I hope my old ones come back in the mail. They get shipped separately.
Posted by Marie Javins at 8:28 AM No comments:

Not gonna turn on the a/c. It's too soon... and a/c isn't good for your power bill, not good for energy use. Not turning it on.

But I can barely move. The humidity is unbearable. A breeze kicked in, a strong one. Tornado warnings, even.

But the breeze doesn't help. The sensation has gone from still heat to feeling like there's a hot blowdryer trained on my face.

This must be how a dog feels on a hot day, I think. If I had a tail, I'd thump it a few times instead of trying to do anything.

I've indulged in iced coffee but still am not functional. Can't do anything in the oppressive thick air.

I give in. If only I could reach the a/c remote without moving...
Posted by Marie Javins at 2:59 PM 1 comment:

More Activity Across the Street

Huh, something's going on in that vacant lot that was the kid's playground while the park was closed. It looks like... a miniature golf course??? 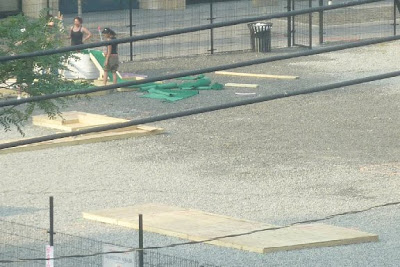 Let's review. If I walk four blocks north, I'll be at the entrance to the Holland Tunnel. I'm in one of the densest, most diverse cities in the entire country. (I think only Queens is more diverse.) We have established long ago that I'm not terribly good at rural living and that I don't like the kind of life where you need a car to do anything.

What I mean is, I don't live in sort of place that has miniature golf courses.

But that sure looks like a mini-golf course to me.

My curiosity won out over my laziness and I went over to ask "What in the hell are you guys doing?" Okay, I was more polite than that... but YES, it's a mini-golf course!

And of the best kind, actually. It's a functional art project designed to be played, installed from June 24 to Labor Day. Proceeds will go to the Jersey City Museum, which, like everything else, had its funding slashed this year. There's a $75 a head benefit on June 23.

I'm totally impressed. Why sit around and whine about lost funding when you can make a mini-golf course instead? That's thinking.
Posted by Marie Javins at 6:38 PM No comments: 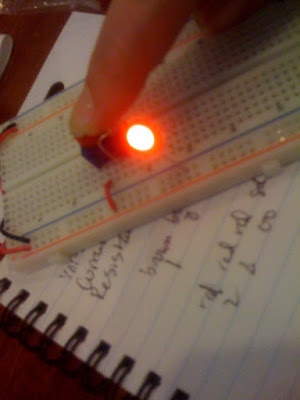 Electricity class is fun.
Posted by Marie Javins at 11:05 PM No comments:

But I broke the video camera in Delhi, and then at some point I put my PowerMac 8500 back together wrong and one of the RCA jacks was dead, and anyway, editing video on your Mac was kind of a pain in the ass in 1998. It's easier now.

I wince when I watch. Today I have a much more stable video camera, even though it's not really a video camera, but rather a point-and-shoot. Maybe I should try that function in iMovie that stabilizes footage. I'll try that on Part 2.

Here's the big version of this video.
Posted by Marie Javins at 9:01 AM No comments: