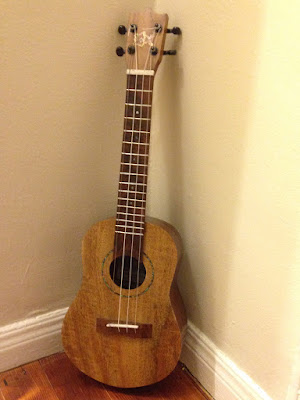 Years before he died, my friend Edward Readicker-Henderson, a well-known travel journalist, asked me what I'd like him to leave me in his will. I said "Nothing, I have enough stuff." But once his will was executed, our mutual friend Amanda wrote to say he'd left me a stuffed llama as a gag gift. I know he laughed when thinking of my reaction upon learning I was getting a stuffed llama, but I changed my mind about wanting nothing after his death. Did I want just a stuffed mangy llama to commemorate our 13-year friendship?

No, I wanted something more. I asked for, and was sent, one of his ukeleles.

He'd once interviewed Jake Shimabukuro, and written a story on ukuleles for Islands magazine. It stuck with me because he had come away so amazed by Shimabukuro's skill.

Edward wrote a lot of stories about travel keeping him going in his last years. It's hard for me to NOT travel now, and a certain well-known comic book artist who happens to be one of my supervisors had a good laugh about this just yesterday--he knows too well it's hard for me to go to a desk every day instead of seeking out a curious adventure. He followed along on the original MariesWorldTour, the 2001 edition.  (Of course, going to work in Los Angeles is its own adventure.)

So I have a ukelele now, one built by Edward's brother, Don, who is also in the Islands article. And oddly, to me, this uke doesn't represent music. It doesn't even represent travel, or my need to create mini-adventures when I can't tackle the whole world.

It represents this: Untarnished amazement.

If Edward could be blown away by someone's skill on a ukulele, that's a lesson.