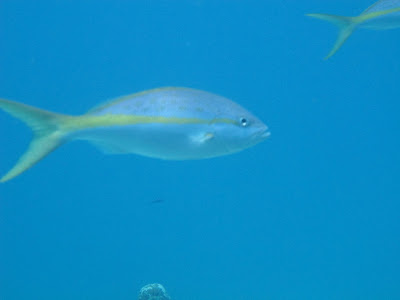 Our dive master, Rodolfo, signalled us to ascend. Up we went, slowly, equalizing a few times. We weren't far down to begin with, but I went slowly and equalized anyway.


At the boat ladder, I removed and handed one fin, then another to the boat's pilot. I took off my gear and handed it to him, until just me and my wetsuit were left. I climbed the ladder and collapsed onto the boat, watching as the other divers joined me.

"That was great!" Everyone agreed. We were all fans of diving the underwater sculpture garden, or MUSA.

"Now we'll go to the other dive site," said Rodolfo.

"I'm done" I declared. "My diving career is over."

Everyone looked at me with surprise.

"I don't really like to dive," I explained. "I just wanted to see the sculptures." Then, seeing their disappointment, I added: "I'm retired until there's something else I want to see."

Rodolfo and his helper took my oxygen tank and replaced someone else's. I've always been a slow breather underwater and never used as much oxygen as I've been allocated. I have no idea if this is good or bad.

We arrived at the other dive site, and I realized my error as the last of the divers flipped off the boat and descended, and the boat pilot came over to chat.

Oh, hell, I thought. I'd been looking forward to napping.

"Do you feel sick?" He looked at me with sappy concern and puppy dog eyes.

"A little," I said. I wasn't sure if I was feeling seasick or hungry. I always feel pretty weird after diving and I haven't successfully done two dives in a row since 1996. I'm not entirely sure why. Maybe I'm just overly sensitive to compression. I think it's normal to feel a little odd after a dive, and most people just plow ahead and rest later. I prefer to rest immediately. Or maybe it's not preference. I hadn't eaten lunch and the little bottles of water they'd passed out weren't really enough. I should have brought water.

Sunscreen, too. I was cowering under a sliver of shade on the boat.

"Do you have cream?" The pilot was still chatting.

Suddenly, not having sunscreen didn't seem like such a bad thing.

"Sometimes it helps seasickness if I..." The pilot did a massage motion with his hands now. 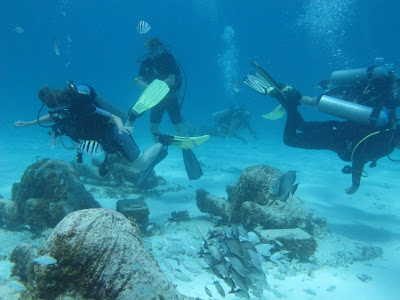 Jesus christ, I thought. I DON'T NEED THIS. I was threatened by this kind of crap in my twenties. At some point in my round-the-world travels, I learned to just be irritated by it. You have to shut it right down and not encourage it. No giggling. No smiles.

"Do you have kids?" I asked, while thinking WHY WHY must I be forced to make small talk to avoid this dipshit harassing me? And by harassment, I mean annoying with sexual overtones which are not the least bit threatening. I had no fear of this small, stupid guy. I seldom am afraid anymore, unless the guy is a lot bigger than me or not in a public area. I was afraid on the train in the Republic of Congo. I was afraid when I realized I'd almost been mugged in Windhoek. Some bored idiot who thinks he's suave isn't dangerous. Just a pain in the ass. And this may have seemed remote, alone with a guy on a boat, but in truth, I could jump in the water at any point and the others would see me.

He looked baffled. "Are you married?"

"No." I didn't feel the need to explain. Screw all these people asking me that around the world. I have lost patience with that too. I'm not married. I don't care if you think it's weird. I don't care if you think it means something and you want to understand. I'm so sick of trying to validate my life. I can't even say "my choices." You think we can choose our paths? Our paths choose us.

"You want to drive the boat?" He displayed a mischievous, rehearsed smile. 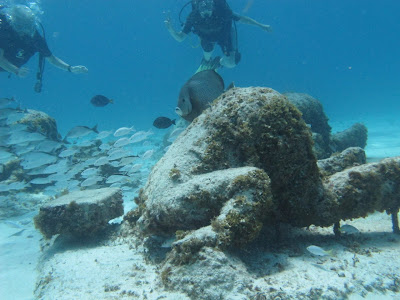 "I could take a photo. You could show your friends."

I'm sure this had produced fun and giggly results on many occasions. Today it produced Oh, fuck off in my internal dialogue, and "No, thank you" in my verbal dialogue.

"So you are going to the whale sharks tomorrow?"

"I will drive us. Unless we don't have enough clients. Then you'll go with a different agency. It is a lot farther though. If you are seasick now, you need to take Dramamine tomorrow."

I could think of a lot of things I'd rather do than spend the day with this guy tomorrow. And I was feeling queasy and weird from diving. I knew it would be a few days before I was feeling normal. That's why I dove today, so by the time I got on the plane I would be over this.

He sat silently for a while now, presumably having exhausted his various avenues of starting up a dialogue, until we saw the ascending bubbles of the divers and motored over a bit to pick them up.

Everyone was delighted with their dive, and now I wished I'd gone.

The pilot turned the boat toward shore and headed back to Isla Mujeres, where I informed the dive shop I was far too seasick to get on another boat tomorrow.

I still want to see the whale sharks. Just not this year.

And it's always good to have a reason to come back.
Posted by Marie Javins at 7:30 PM