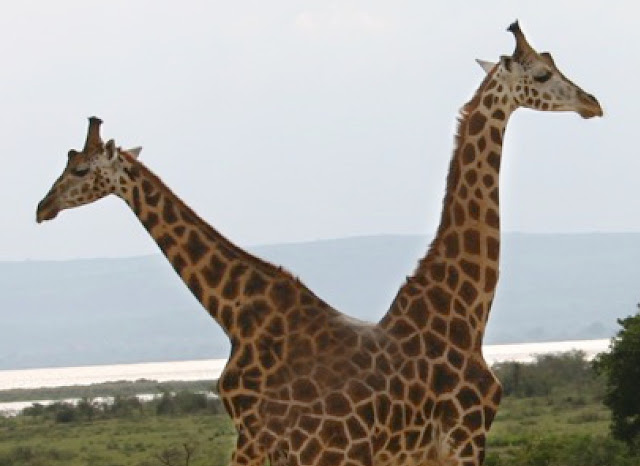 The pushmi pullyu has always been my spirit animal.
Posted by Marie Javins at 10:25 AM 2 comments:

The trains from San Diego to Los Angeles were delayed for two days due to a "trespasser" being hit on Sunday.

Interesting choice of words. Accurate, I suppose, but sending a clear message of blame out over the P.A.

I had two seats to myself in business class, on the western side. The wifi worked well enough, and here was the view.

Not bad for a day's journey.

Turn Up the Volume

Journey with me for a moment, from a high floor in the Hyatt down to the lobby bar on Saturday night of Comic-Con.

The annual pilgrimage to San Diego Comic Con sure is simpler now that I live a few hours away instead of across the country.

I'd planned to go to the office the first half of Thursday, but then I didn't want to show up in San Diego too late, so I moved my Amtrak ticket to just before lunch and headed down to Union Station on the Red Line. Amtrak adds additional trains for SDCC, which start and end at LA and San Diego, not continuing on up the coast. This is how I hope to avoid riding the train with colleagues on the way down—I start in LA on a train that originates there, and then I don't end up with anyone who boards in Burbank.

Some of my colleagues are wonderful to talk with, but not all of them. It's not like I get to choose when I buy my train ticket, so this is a bit of preventative maintenance. Avoidance is harder than it sounds since we all buy business class tickets for this particular journey. It's the only way to guarantee a seat on standing room only trains.

I picked up lunch at Union Station and boarded. Initially, one of my colleagues sat down next to me in spite of my attempts at avoidance. Good news, he was one I enjoy speaking with. But then he had to move to let a mother sit next to her two kids, so I was able to read scripts and catch up on some work on my journey.

Three hours later, I disembarked in Old Town, one stop before the end of the line at the Santa Fe Depot in San Diego. I'd booked a motel cheapie out in the land of topless bars, which seem to now offer vaping as well as nude woman, and I was able to walk from the train station, though the walk was not one I'd want to do at night.

This night was on my own dime, and I'd picked the Good Nite Inn off booking.com, which turned out to be perfectly fine aside from being in a remote location. I checked in and walked back to the train station, where I caught the trolley to the convention center. I picked up my badge, met my good friend and partner-in-crime Stuart, and we went to dinner. We headed to two different parties later that evening, and I caught a Lyft home long after midnight.

Friday morning, I packed up, headed in by Lyft to the Hyatt (now on the company tab), and headed to Brickyard for coffee and breakfast. My first panel started at noon and I had two more over the course of the day. I crammed for all three, like a student during finals week. The secret to not saying something stupid in public is to know what you're talking about. At least, that works for me.

Prepared, I waded into the hall. First stop, DC Super Hero Girls panel. Second, Justice League. Third, Young Readers. Later, the Eisners, where one of my comics was nominated in three categories, but won exactly none.

When I dragged myself back to my room after a long night at the Hyatt bar, I was relieved. The hardest day was over. Only one panel a day after this, I thought, and promptly fell asleep.
Posted by Marie Javins at 8:30 AM 1 comment:

Me and two of my college friends had dinner in South Pasadena tonight. I haven't seen one in decades. The other coincidentally works upstairs from me in Burbank. 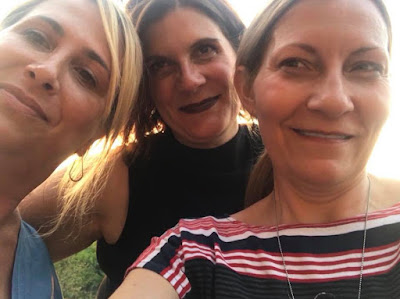 I bought an Instant Pot, a few months ago. I opened it up, glanced at it, asked around for what I could use it for, and concluded there wasn't much point in having bought it. Most of the answers involved hard-boiled eggs and perfect rice. I don't exactly find these challenging on the stove, so I was baffled about the whole point of my new appliance.

I finally used it twice this week. Success!

Of course, I could have cooked these on the stovetop easily too, but at least I gave it a shot. I'm still working on finding out what best to use this for. 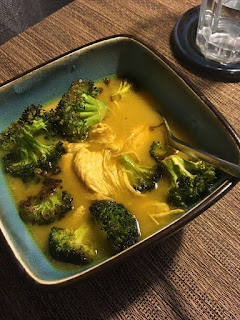 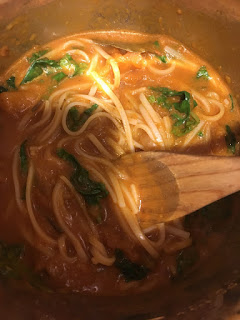 A Bit of Greenery 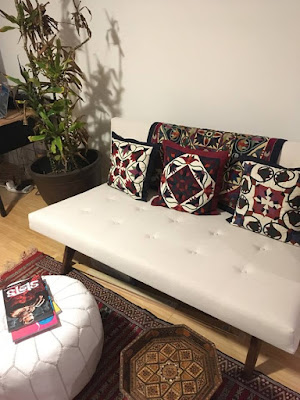 Today I realized the giant plant that came with my condo would make the perfect divider between desk/office space and sofa/living space.

If only I hadn't nearly killed it by dragging it out onto the sunny balcony where it has mostly shriveled up and almost died.

Plants and I don't get along. The only plants I ever manage to keep alive are spices—basil, rosemary, thyme, parsley. The incentive keeps me interested.

But this plant is the type that can recover, so I pushed it onto a bit of flattened cardboard and pulled it back inside.

The living room is really coming together. Of course, I only use my desk and office chair, but perhaps I'll sit on the sofa to strum my ukulele.
Posted by Marie Javins at 2:00 PM 1 comment:

Learn Something New Every Day

Last Sunday, I paid two visits to the ukulele store in Little Tokyo. One right when they opened to drop off my uke, and one at the very end of their day to pick it up.

They gently filed down "the action," meaning the nut and the bridge. It was made for stronger hands than mine and I was getting blisters from pushing down so hard. Now playing is easier, but the strings are new so they aren't staying in tune for long.

They replaced my low G string with a regular one, which I'm going to have to sort out once I get better at this. I want to keep the original intent going—this uke belonged to my friend Edward Readicker-Henderson. He died in 2016, a travel writer who kept going up until he physically simply could not. He'd developed an interest in ukuleles while writing about Hawaii, and his brother Donny built this uke from leftover walnut from the bed their father made. The top is spalted curly mango and the fret board is ebony. It's matching bass uke lives in Guam, which coincidentally is where my great-grandfather resided after the war. He was involved in the rebuilding, which is something he wrote about in his 1947 book, Lion Six.

This exquisitely crafted ukulele sat unused for most of 2017, but I finally spotted a beginner's class at Los Angeles City College. The class only went for five sessions, and I miss the third one due to being home in JC, but I treasured every other one. I suck at playing the uke, not gonna lie. But it is just so much fun to do something completely new to me.

Though my neighbors might be less enthralled, but one of them is a classical singer, so it's only fair I fight back with my jangly attempts at Twinkle, Twinkle, Little Star. 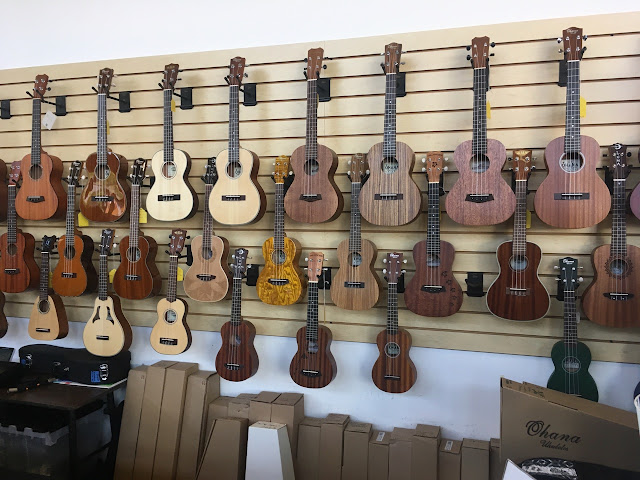 Ziggy now lives with friends of mine, about 20 minutes north of Burbank. I was able to meet Ziggy as part of his socialization process. My friend Monica has kids, and I piggybacked on the first-ever Ziggy-meets-children event to also do Ziggy-meets-Marie.

Like most puppies, Ziggy does not like to hold still for long, so Monica had a hard time getting a clear focus.

There's no way I'm getting a dog, because I work crazy hours and that would just be cruel, but I'm so glad Ziggy is not too far away. 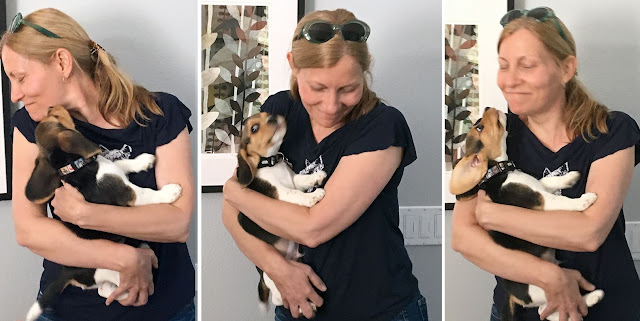 You might be wondering what happened with my refrigerator problem.

I'm optimistic it's been solved.

A guy from Thrifty came last Thursday morning. He was nice and prompt and knew what to do. He pulled out my refrigerator and changed the Minotaur.

He also ordered a new control unit, and he'll be back with this over the coming week. I left town for five days and came back to a frost-free freezer and no strange noises, so I guess my Minotaur is tamed now.
Posted by Marie Javins at 3:33 PM 6 comments:

Now we're talking. If I could travel like this every time, I wouldn't mind flying at all. 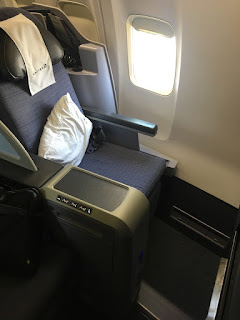 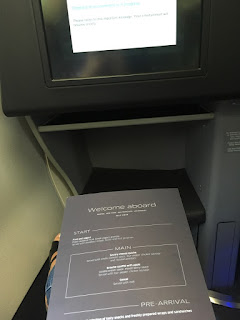 The motion detector light went on behind my house at 2:30 a.m. This woke me up and I stumbled groggily into the back room, where I heard a rustling directly outside the open bathroom window.

I have screens and window bars, and I reminded myself of that as I heard the sound of a person, the friction of clothing against clothing, the quiet sound of motion as they backed away from the window well.

I froze. What to do?

It's a raccoon, I thought. Or a cat. But how could a cat make that noise? Cats are silent, mostly. But we have big raccoons living next door on the convent grounds. What do raccoons sound like when they're waking up? Raccoons don't wear clothes, so it's hard to imagine them making any sounds at all.

You have window bars, I reminded myself. There's simply no way a prowler could get in without picking the door locks, and that would take time, plus I would see them outside the door.

I assumed the worst—someone wandering the neighborhood, looking for potential burglary spots. The best-case scenario is oddly loud raccoon, and another possibility is a human looking for a place to sleep.

But who would want to sleep in a moist window well? Probably infested with cat, rat, or raccoon feces?

I gingerly crept back to my bed, where I cowered until I fell asleep.

I seem to never stop working on my house in Jersey City. Once I finished the upstairs, I moved on to the downstairs. This past trip, I dug a hammer head and a baby toy out of the drain under the front (newly refaced) stoop. The facade and yard still awaits me, once day when I'm really procrastinating on some writing.

I hung some souvenirs over the weekend, including some things I'd been struggling to figure out how to display. I don't have a great photo of the Polynesian ceremonial war paddle, but it's finally up. You can see one side of it in the top photo. 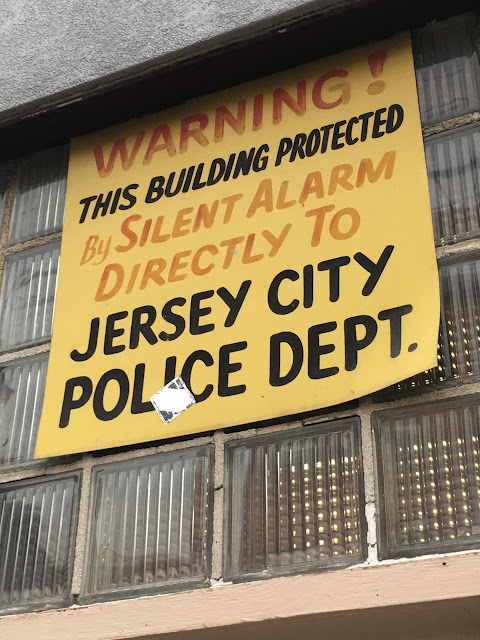