So ends 2016, after nearly a whole year down of working on the little studio, bit by bit, getting a little better every time I go home. Maybe it'll be finished by the time I get to use it, years from now.

The last photo shows the Ikea wire BBF strung up in the wet room, to keep the shower from dousing the bathroom door and toilet every time it's used. That seems like a reasonable metaphor for life. Try to keep the spray from destroying everything around it. 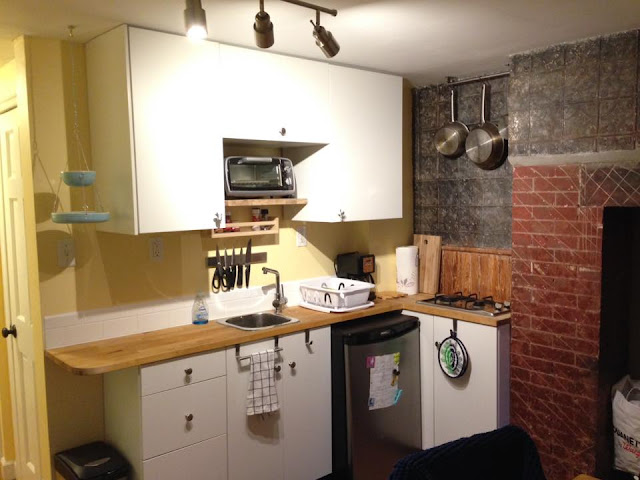 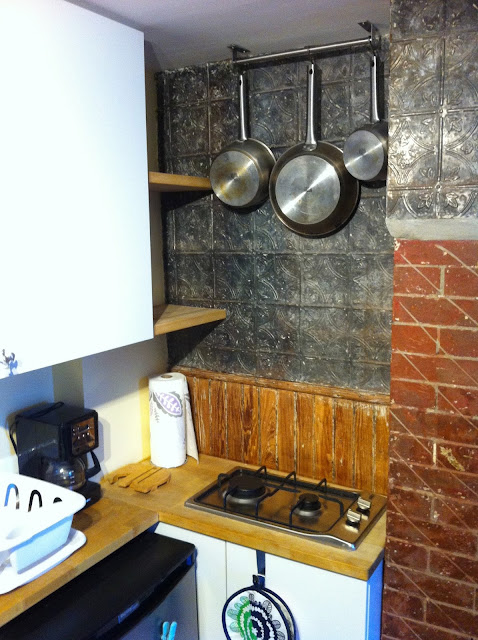 Posted by Marie Javins at 6:08 PM No comments:

BBF and I had to walk down to the hardware store this morning. We always pass this on the way.

I'm sure this is where AAA took my then-BF Rick's Buick or whatever it was in 1988 when the starter clonked out while he was staying with me on 5th Street in JC. Maybe it wasn't a Buick. It was a classic 70s car, blue. I remember this decor, as it's memorable, and I remember it being in a rough part of town, which I guess to my 22-year-old eyes, Garfield would've been at the time. But I thought the garage was called Ray's. This is definitely not Ray's.

I guess I'm not that sure what it was called, and maybe it wasn't even this place. 1988 is a long time ago, and memory is a funny thing. 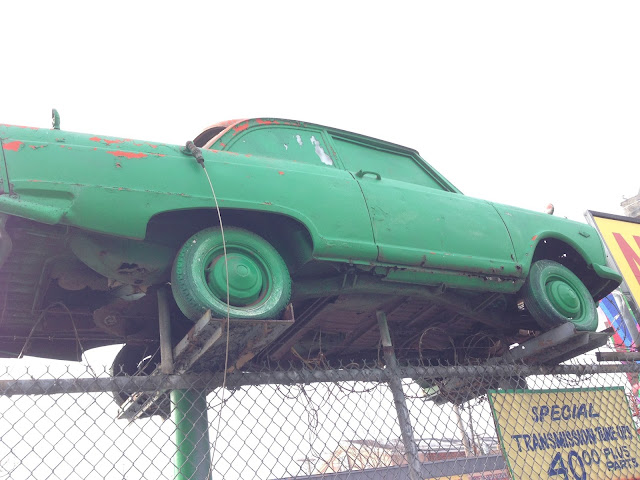 Posted by Marie Javins at 10:21 AM No comments:

The Oculus at night. 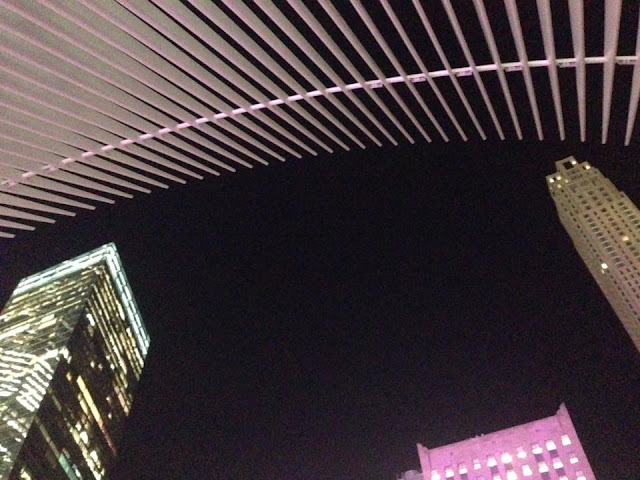 Posted by Marie Javins at 6:03 PM No comments:

Some years back, I passed this sign and thought how obnoxious. 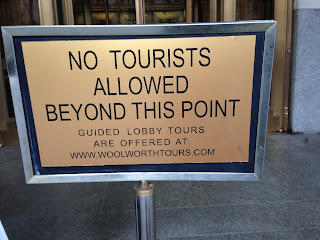 But then while I was procrastinating online, I found the link to tours. I immediately booked one. I'd get to go "beyond this point," finally!

The tour is worth your time. Here's a look inside. 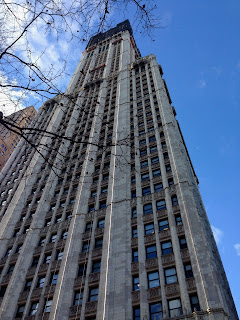 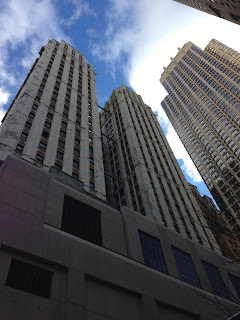 Read more »
Posted by Marie Javins at 3:05 PM No comments:

I was digging around my garage, seeking some tax documents the tax-y state of California wished to see, when I stumbled over these 1994 notes from Alex Toth.

I didn't find the tax documents, but this was way better. 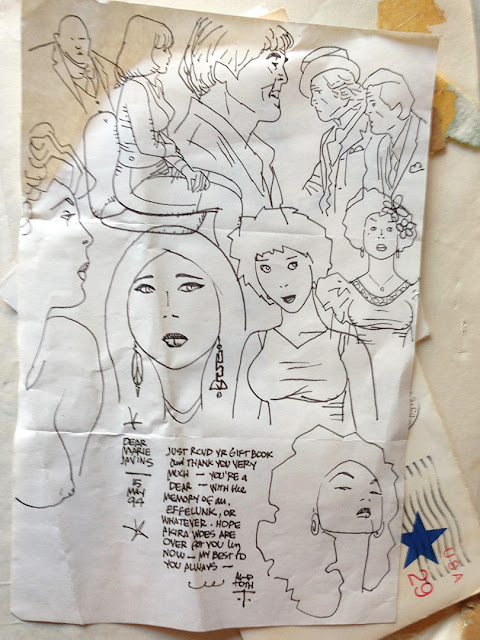 Posted by Marie Javins at 12:25 PM No comments:

I was home, real home, not where I live.

And I got to spend time with friends. A random passerby took this photo.

'Twas a day of dough. 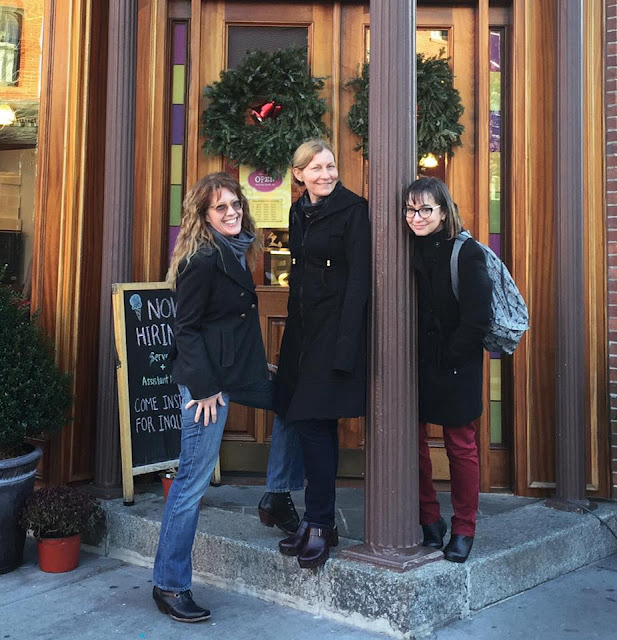 Posted by Marie Javins at 6:01 PM No comments: 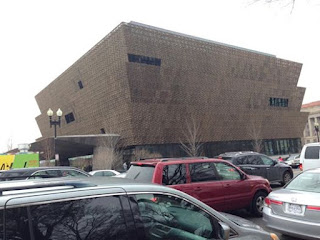 Back in September, when reviews of the new Smithsonian National Museum of African American History showed up, I jumped on the timed entry link.

True, I am living in Los Angeles at the moment, completely by accident, but I knew I'd be in northern Virginia around Christmas, so I booked two tickets for December 26.

The day after Christmas, my mother dropped me off at the metro stop nearest her. BBF had gotten on a Greyhound early in the morning, and was on his way from Port Authority.

The DC Greyhound station, once a new marvel hugely improved upon the decrepit one on New York Avenue, had been pronounced too big and itself decrepit, and had closed its doors sometime in the not-too-distant past, so Greyhounds now come into the bus plaza above Union Station, the same place the Bolt Bus arrives and departs from. 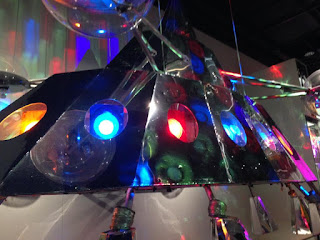 I vaguely remembered when I'd left from New York Avenue to go to check out NYU in my senior year of high school. When I'd gone to college from there, stopping at Breezewood the first time, and ending up in Springfield, Ohio, for my first quarter at Antioch. I'd probably headed to New York City a few times from the New York Avenue terminal. I'd no doubt arrived there from somewhere in Pennsylvania the time I hit a deer and had to leave my car at a repair shop for a week. Then, Greyhound had moved behind Union Station when it acquired Trailways. I remember a lot of red from that time. I'd left out of the "new" terminal more times than I could count, once I'd moved to the NYC-area. But now, the bus terminal was a parking structure over Union Station.

It's an improvement, to be honest. Union Station has restaurants, coffee shops, and the metro.

What Union Station doesn't have, and what nowhere in DC seems to have, is luggage storage. Or rather, it does, but it's $30 a day for one suitcase. Seriously. I'd already bought a Bolt Bus ticket to Newark for later the same day before I realized this, or I'd have just booked up a hotel room on Priceline. There was, at least, a sign indicating the luggage storage place is moving to a different location within Union Station, and supposedly introducing more sane prices.

BBF's Greyhound showed up just a little late, but that was enough time for me to pay the $30 and stash my bag. We had a bite to eat, then caught the metro over to the museum.

The timed entry system worked pretty well. If I hadn't read warnings about the line inside, I'd have missed the best part of the exhibits, deep inside the building. Once we went downstairs, we hit a massive line which we stood in for about 40 minutes before getting into the actual exhibit space. This will change in time, of course, and you'll be able to wander about freely, but for now, there was a lot of initial waiting involved.

That was the only complicated part, though. The rest was interesting and touching, and seeing it in the waning days of the first African-American president would have been unique on its own, but seeing it in the context of so many gains being imminently endangered gave me a feeling of dread. But of course, the march of history stops for no one, and while we can pretend things will be brought to a stop, that won't last. Evolution is upon us, and mere mortals attempts at controlling culture will be inevitably cast aside. The museum will not be a memory of a dying dream, but rather, will be a benchmark in progress.

Posted by Marie Javins at 5:58 PM No comments: 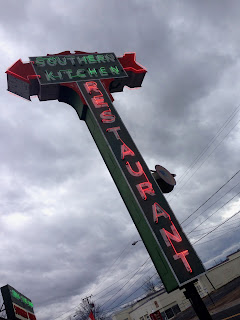 I dragged myself out of bed at 4 in the morning on 12/23, so I could be on the first LAX Flyaway bus to leave from Hollywood.

This was no fun, but I've learned to be on the first flight out on holidays. Plus, the shuttle driver taught me something, so I'm glad to have been on this bus.

We headed straight to baggage claim, not to Departures. In doing so, we avoided that hour-long crawl around the LAX loop, which had driven me kind of batty at Thanksgiving.

Pro tip: Don't screw around with Departures at LAX on holidays.

The flight was straightforward enough, and I was at Dulles soon enough, where my mother picked me up. We spent a few days around Front Royal, but the highlight has to be when my mother's husband released a mouse from a live trap, and a second later, a feral cat had the mouse in its mouth.

Posted by Marie Javins at 5:42 PM No comments:

Puppies came to the office today. Best holiday party ever! 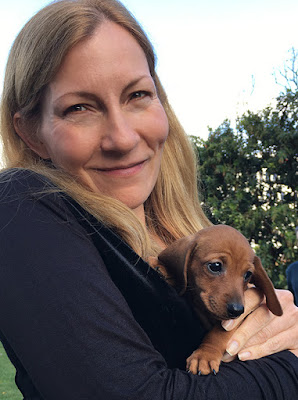 Update: And here's the puppy my sister got me for Christmas. 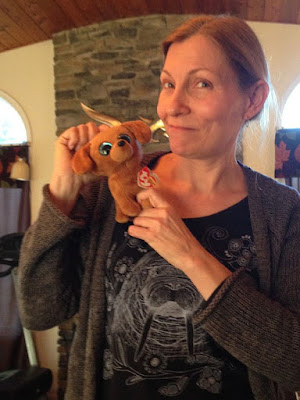 Posted by Marie Javins at 12:31 AM No comments: 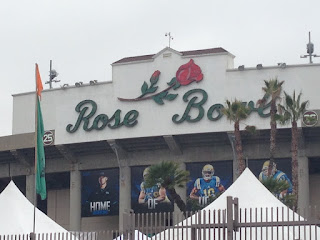 After our walk in the woods, Tracy and I headed over to the Rose Bowl in Pasadena, which holds an enormous flea market once a month.

I'd been meaning to go for more than a year, but it's hard to find the exact right Sunday to commit to hauling myself out to Pasadena from Hollywood. But we were there already, in the mountains right above. Plus, it turned out to be cheaper to get in once it was late in the day.

We parked Tracy's rental car on the massive lawn and headed in. This is a BIG flea market. We could've been there for hours, but inevitably, shopping like this is wearying. I was ready to go after a few hours, and relieved we hadn't spent the entire day wandering through the aisles.

There were no fleas available at the flea market, but we did stumble over a guy selling doormats. I bought two, one little one for my Jersey City back door (that's a magnetic screen you see across the door), and one full-size for my Hollywood studio. 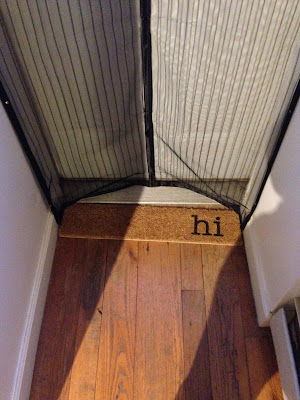 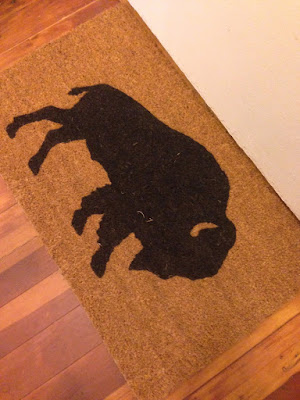 Posted by Marie Javins at 11:50 PM No comments:

Walking in the Woods

Tracy came to town from JC, and we went hiking. Well, we went walking, really. It was fun. 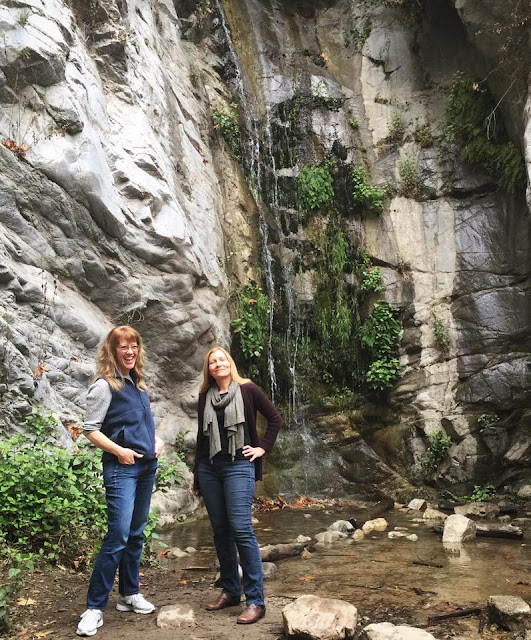 Here's proof I can sleep through anything.

An alien spacecraft landed on Hollywood Boulevard, and I didn't even notice until I had to get from the metro to the supermarket, then through all this to my apartment. 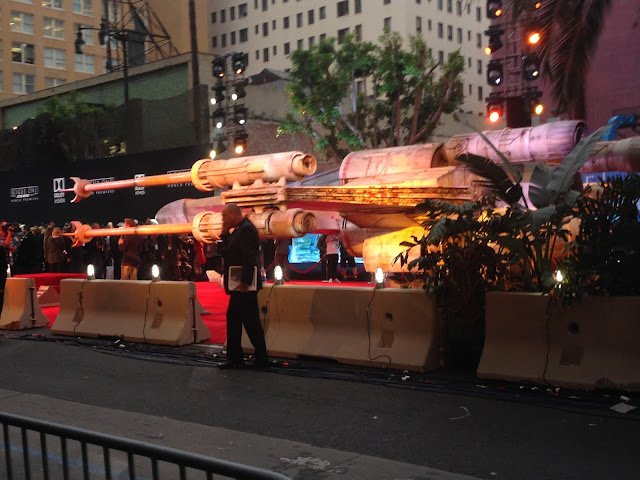 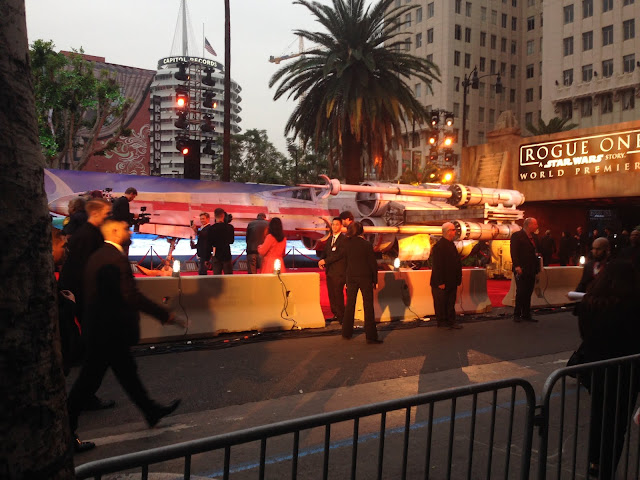 Posted by Marie Javins at 9:55 PM No comments:

I headed up to Krimson Salon in Burbank today for my very occasional hair fixing up. I'm always amazed at how good other people can make it look...and how that lasts for about three minutes as I walk away from the salon. 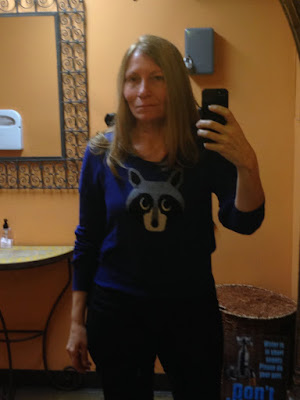 Posted by Marie Javins at 11:51 PM No comments:

I have a new electric meter.

I know, I know. Very exciting. But it is!

A few months ago, I called the utility company to find out how to sort out my bill. The guy who comes by to read the meters can see the gas meter because it's outside, but the electric meter is inside in the basement, and it's a total crapshoot on if anyone is home when he shows up. I tried to get someone to come by when I knew I'd be there. 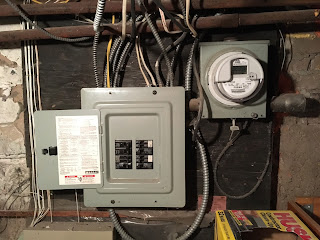 "You know, we can replace your meter with one which can be read remotely," the customer service rep said.

WELL WHY DIDN'T YOU TELL ME.

I don't know why this information isn't commonly shared. Had it been in some junk mail I'd overlooked? It cost me nothing. I just had to make sure my friend who went to NYC for his birthday and was staying in my studio could be there during the appointment. He let the meter guy in, and within a half-hour, I'd never have the estimated bill problem again.

"It's done. Also, the meter guy thinks you have the best job in the world."

Thanks to my friend. And uh, thanks to the guy who somehow made small talk about my job, even though I was across the country.
Posted by Marie Javins at 7:07 PM No comments: