Something happened in the world of comics yesterday—something big, though long-expected.

DC Comics announced its 2015 move to Burbank. It makes sense in some ways, but it is worrying in others.

Comics are not just superhero magazines and movie and lunchbox offshoots. Superheroes can be, in a way, representative of a less-sophisticated culture, or of an innocence, the idea that you can bash your problems away. And the medium is so much more than that, and so much more than the Big Two. But still, my gut aches with the fear of the unknown, the idea that something which once supported an entire industry might end up being a few offices in two major corporations in Burbank.

But change happens. You have to stay nimble, not look back. Be sentimental, then wake up the next day and start in on a new project. Live through or submerge the pain. Try something new.

Also worrying to me is that so many things about Manhattan are already unrecognizable and to an extent, vile. The costs have skyrocketed past the reach of normal humans without luck or connections who haven't already been living in town long enough to have gotten something cheap back in the day. And who ARE these ridiculous cliched rich people littering the bars and restaurants? And when will the legend of Manhattan, NYC-which hasn't even been here in almost 15 years--stop showing up as gritty, mean streets in the movies which could just portray Chipotle, Cosi, and Au Bon Pain? (Note the Outer Boroughs, Harlem and above, Hudson Valley, and Hudson County are doing just fine, though some areas are imperiled by the same creeping gentry that walloped Manhattan below the north end of Central Park.)

I keep asking myself...is the DC move just a corporate decision which is ultimately meaningless except to the people with mortgages here and kids in school, or is this a symptom of something, not just in comics or publishing, but in New York City?

When is it time to go?

And then tonight, I went to see an an oddball musical about the Alison Bechdel graphic novel Fun Home. And I concluded: Not yet.
Posted by Marie Javins at 11:46 AM No comments:

For forty-seven days, I lived and breathed a children's book property. I got the contract with the "Ready, set, go" order on September 10.

160 pages and the covers went to press yesterday morning.

I'm slowly normalizing here, late on my Spider-Man project, but exhaling greatly that the project is complete. Nothing to do now but wait on the payments and check the proofs.

Perhaps I was lucky, in the end, that my foot decided to break three weeks ago. It eliminated any external distractions. I went to dinner twice and to the coffee shop once a week.

Now has anyone seen my life?
Posted by Marie Javins at 11:58 AM No comments:

I'm pretty excited at what FedEx brought me today—but I can't share it with you because it isn't released and in the stores yet.

So here's the cover and the credits page. Remember when I was conducting interviews on terrible Wi-Fi connections from hotel rooms in Cancun and Mexico City? This is the result.

The inside looks amazing, but no peeking yet. 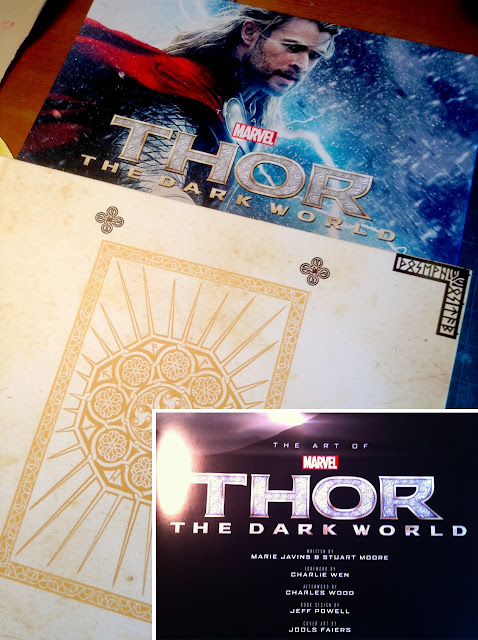 Posted by Marie Javins at 1:46 PM No comments:

One Fracture Down, One To Go 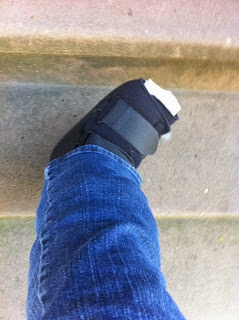 I headed back to the Iron Man-fan podiatrist yesterday for a check-up.

Which is appropriate, since he gave me an Iron Man-like boot.

And I've done pretty well. One of my metatarsal fractures is gone, and the other one is healing up nicely.

I have to wear the boot for another week whenever I go anywhere, and next week, I'm allowed to switch to a sneaker. Not just any--a New Balance one. (I'm not sure I have one of those. I'll have to check.)

I'm hugely relieved to be making progress. Being in mobility jail has really cramped my style.

And kept me on deadline.

Posted by Marie Javins at 11:44 AM No comments: 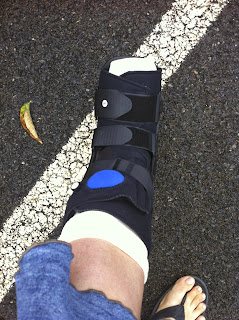 Trapped in my house by a cinderblock boot, I am slowly going batshit crazy.

Does batshit have a hyphen? she wonders for too long.

Going out is a pain. I can tell you every trip I've taken outside the house since I got this air cast last Monday.

On Tuesday, I drove my car to a lot by the PATH train. I hobbled down the stairs (how do mobility-challenged people get around?) to the platform, no one offered me a seat, and at 23rd Street, I hobbled down, up, over, up, and the three blocks to SVA to teach my class. My students were sympathetic. Several of them had done what I did, which is overdo it after stressing foot bones. I fractured the fourth and fifth metatarsals.

My trips out after that were mostly to move my car or get the mail. One night, I walked across the street to the Italian restaurant with my neighbor Denise. I'm still off sugar, which means no pasta, but I had a delicious steak.

On Friday, I ran some errands in my car. Post office, car wash, gas, laundry, supermarket. But I overdid it, and had to rest all Saturday.

And by rest, I mean sit at my computer and work on various projects. Editing Larry's Captain America book. Lining up interviews for the Spider-Man movie book. Endlessly fiddling with the manuscript on the book I'm rush-packaging.

It's not the worst time to be stuck inside.

But it's driving me nuts.

I'm not even sure what happened.

I noticed some swelling and sensitivity on the squishy part of my foot under my left pinky toe.

When was this? Wednesday? Thursday?

Then on Friday, I stubbed my toe on my desk chair.

But I had things to do, places to be. A friend who lives in Greece was meeting me at 3, and I had to stop by the old office before then to see a box of magazines that had shown up in the mail (I'd supplied the cover), then I had a ticket to a New Yorker Festival Event. Jonathan Lethem was being joined by Junot Diaz, who I had been somewhat interested in seeing speak when I was in Bali, but then I'd been working on a different panel that took place simultaneously. That was okay—I've never actually read his books. But the twofer-one deal was appealing.

So I scampered all over town on Friday night. My food was a bit sore, and by the time I got home, a lot more sore. But I didn't think much of it.

Until I woke up in excruciating pain in the middle of the night.

The swelling didn't go down on Saturday, though I was able to hobble out of the house to the car and go to the supermarket. Which was good since after that, I couldn't hobble much of anywhere.

Roberta recommended a podiatrist by the post office—"He even has a parking lot"—so I dragged my bum foot along behind me to the car, then out of the car to the office.

And look what I have now. An awesome space boot.

I get to wear it for a month.

And because I don't do things small, I have two, count 'em, two fractures.

Posted by Marie Javins at 10:01 PM No comments:

Erie Cut - the Back of Downtown 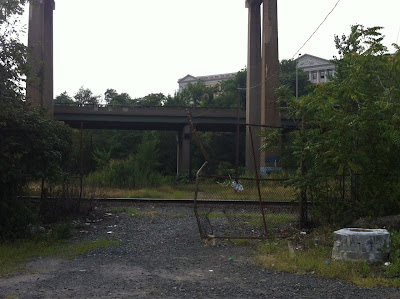 I've always wanted to go explore in the Erie Cut, but I'm too chicken to go alone. One of my neighbors has explored the area extensively as he mentions here on his blog, with links to his great photos.

I am currently overwhelmed with freelance projects, but right before that happened, I walked down to my old block and looked for a way into the cut. I thought it would involve climbing fences.

No. There's actually an easier way. You just walk through the gate. 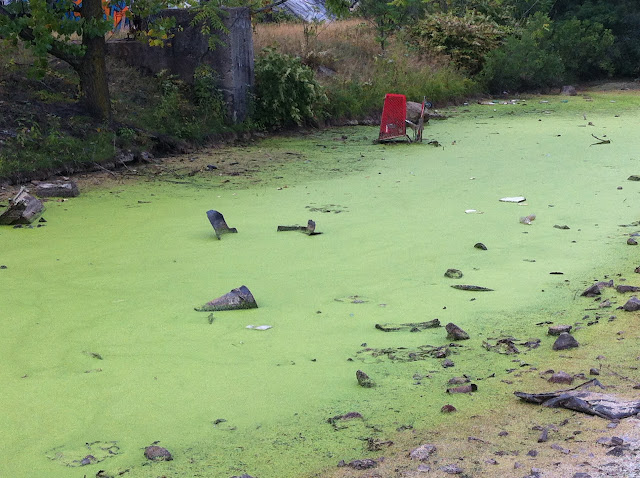 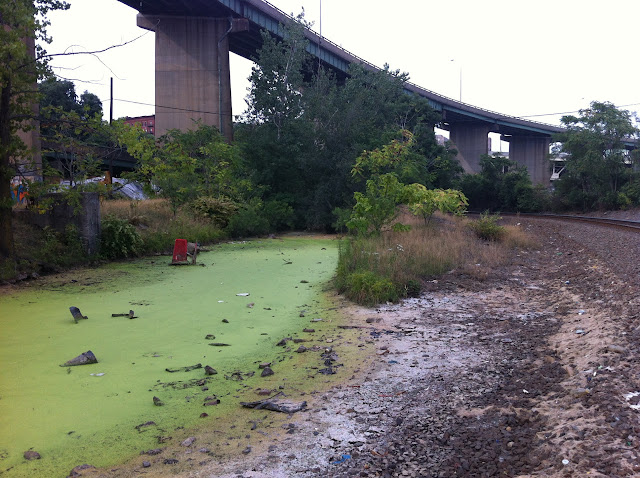