Across the Caribbean Sea 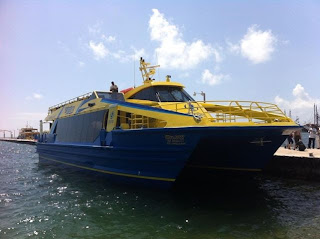 The wardrobe I packed for a month of sitting at a desk and wandering the cobblestone streets of San Miguel turned out to be lacking in the sporty-diver-on-Isla-Mujeres department, I realized as I sorted my gear into 'stuff I was checking with the bellhop at the Cancun Radisson' and 'stuff going with me for a night on Isla Mujeres.'

Maybe I can get away with wearing my pajamas on the boat, I thought. But I'd probably be given a wet suit for the scuba diving later today. I was less sure about tomorrow, when I planned to go to the whale sharks.

I was running late, and panicked a bit when I looked at the time. I had half an hour to get to the ferry! I ran downstairs, checked out and left my bag with the bellhop, and confirmed the location of the bus stop with the receptionist. Only a block away.

At the bus stop, I was a little confused. Too many buses stopped at one time, and I couldn't see past them to see what other buses were approaching. Then a van pulled up with a sign reading JUAREZ.

I jumped in. "Gran Puerto?" The driver nodded. The door shut—automatically, which was a nice touch—and we were off.

The journey to the ferry took only ten minutes, and the stop was obvious so I didn't have to sweat it about knowing where I was. I scampered in, carrying my 40 peso tote bag 'Cancun' luggage I'd picked up on Tulum Avenue the night before, and bought a 70 peso ticket.

The ferry was waiting, but loading hadn't started yet. A second after I joined the line, we were off, filing into the shaded, air conditioned cabin for the twenty-ish minute ride over to Isla Mujeres. 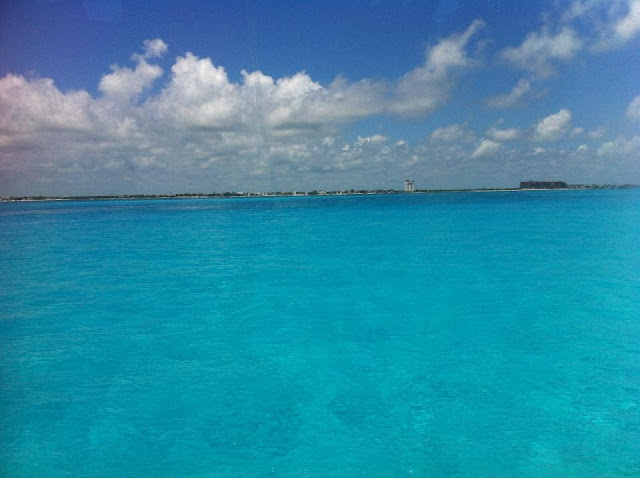