Today it was raining in Cancun. 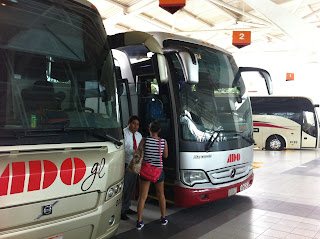 That was all right. I was working in my room until check-out time. And it wasn't just raining—it was alternately pouring and raining.

Lucky for me, the rain slowed to a drizzle after 11 AM, then stopped completely by around 11:30.

Time for a break to the bus station, I knew.

I checked out and pulled my bag across a slightly flooded lot, in between two buildings, and over to Tulum. I didn't want to risk jaywalking with luggage, so I went down to the crosswalk. Or what appears to be a crosswalk. It's really a semi-speedbump where pedestrians take advantage of the slow speeds of vehicles to cross in front of them.

At the bus station, I approached a counter with the word AEROPUERTO signed above it. I bought a ticket—just a few bucks for what was a small fortune by taxi—and boarded the bus to the airport. 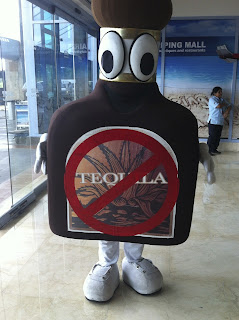 Where I proceeded to get off at the wrong terminal. It came back to me now. There was the big international terminal, then there was the domestic and Cuba terminal, where you rock up to the desk and buy a visa.

I got on the shuttle bus to the international terminal. No harm done. I had the most disgusting, expensive lunch I'd had in Mexico, made all the more insulting by the wide variety of food on offer in the food court behind Security. But I'm off sugar, so it was chicken or chicken.

The flight to Miami was startlingly short, and on arrival, I went out to the curb and used my cell phone to call the Hampton Inn Blue Lagoon for a pick-up. I was able to communicate again! That was nice. And at the hotel, I ordered dinner in from the Cuban restaurant across the street. The hotel was pleasant, but it didn't matter. I was asleep early. Tomorrow I'd get up at the crack of dawn for the flight to Newark.