Windmills in the Desert

A few days ago, someone asked me if the theme park we put up in Kuwait was still there.

"I'm sure it is," I said. "It was there before we got to it, and it's probably still there now. But the murals probably aren't maintained."

Then it occurred to me to dig around online.

I only found one photo on TripAdvisor, but that's how I learned the colors did not hold up to the Kuwaiti sun. But yes, June Brigman's art is still there, towering next to a shopping mall in Jahra, a monument, an anthem to a Quixotic cause. 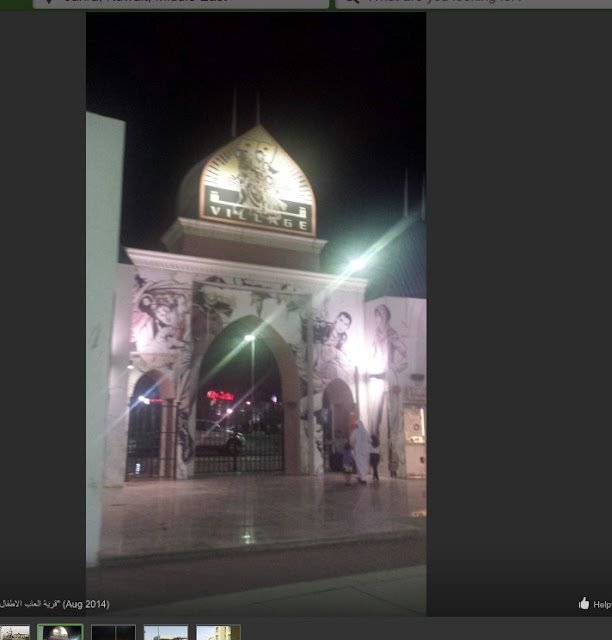 Below is the park on opening night in February of 2009. 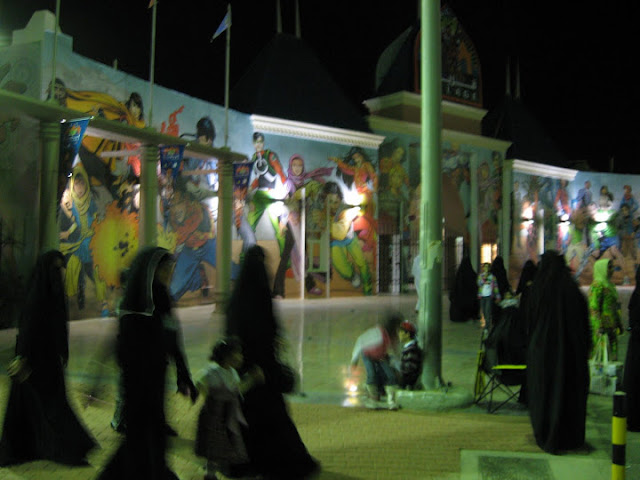 Posted by Marie Javins at 10:24 PM No comments:

On Clothes and Shoes and Malls and Hamilton Park

I went downtown today to try on jeans at Macy's. Downtown as in Los Angeles. From Hollywood, this is easy. Just hop on the Red Line at Hollywood and Argyle, which is called Hollywood & Vine. Hop off at 7th Street, less than 15 minutes later.*

I missed all that walking and even my daily commute through consumerism. The mall had A/C in the summer, heat in the winter, a roof in the rain, Indian food until 11 on weeknights, a threading kiosk, and the clothes section at Macy's. Or the shoes, if you're Roberta. When I got sick of the mall, or in nice weather, I'd walk to the other stop, avoiding the mall and walking through the neighborhood instead.

"I'll be able to go home in no time," I thought today, by the Levi's on the second floor of DTLA Macy’s. "Two more years max to finish some commitments."**

And then, in the handbags, I realized...that part of my life is over. I don't live in Hamilton Park anymore, even when I do eventually go home. I lived there after Cairo to departing for L.A., leaving it empty my second time in Egypt and subletting during my second trip around the world. Before that, on and off from 2003 to 2007, I lived two blocks away from Hamilton Park. My trip to Manhattan followed the same route. In May, I bought a house a few miles away. Not on the PATH train. (Obviously, a million dollar house near the subway is out of my range.) I am by Liberty State Park now, where I can take a Light Rail or a bus to the PATH. Or walk, but it’s past an unpleasant traffic-y area. So even when I do eventually go home, that part of my life where I lived on an 1800s residential square with brownstones and a gazebo, where I walked past the Macy’s women’s clothing every day, where I would race to the Indian carry-out in the food court at 10:50 on nights we’d sent books to press, where I’d run downstairs to meet Denise at the coffee shop or Roberta in the park…that is no more a part of my life than the two years I was in and out of Australia, the summer in Uganda, the year of being a Cairene, the seven years of working for Kuwait, the identity of being a roaming traveler for a year, stopping a month in Bali or Berlin. The writer. The Marvel movie book writer, the freelance prose editor, the colorist, the SVA teacher, the travel book writer.

All that is as gone as my years in and around Hamilton Park, and bickering with Roberta over which is better, the clothes or the shoes.

*My not bringing my car here doesn’t hurt anyone, so you know what would be cool? If people did NOT take this moment to express outrage or shock that I have set up my situation here to make the most of public transit. I figure if I can go around the entire world twice on public transport, including horse-cart, share-taxi, old truck, trains, and buses, one of the most urban environments in an English-speaking country should be a piece of cake.

**I know it seems to be a weird dichotomy that someone who has lived all over the world wants to go home, but what you might not know is all that roaming taught me that I needed to commit to one spot and make it home. Which I’d done a few years before being uprooted. Years of living abroad or traveling for extended periods of time taught me the value of NOT roaming around, and here I am roaming around again. I cannot deny that I value my time spent in other countries and cities, but I resent being thwarted and I am basically putting my life on hold again, but this time solely for career, which if you’ve been following the Marie-narrative for a while, you know that is contrary to how I live.
Posted by Marie Javins at 10:34 PM 2 comments:

Or you might say, gentrification in Hollywood. I look forward to seeing what this becomes. 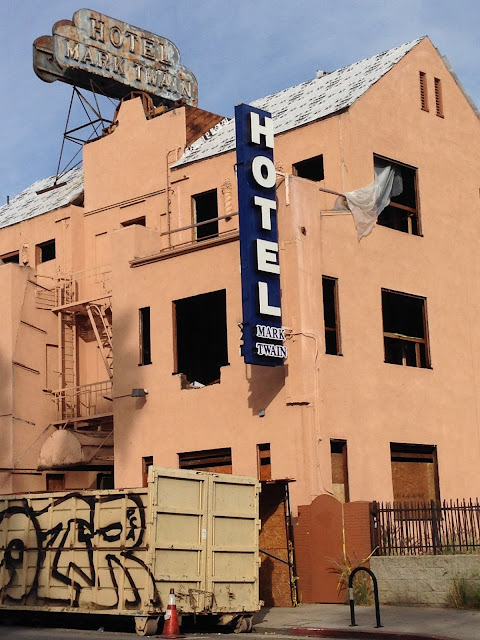 Here is the door to my office at work. I didn't ask for this one--or any specific door. We didn't get to choose. Originally, I had a jagged-edged Mazzucchelli Batman door. But then things were shuffled and I ended up with a Sergio door.

Which is really, to my mind, the best door out there. As a once-editor of Groo, I am not complaining. 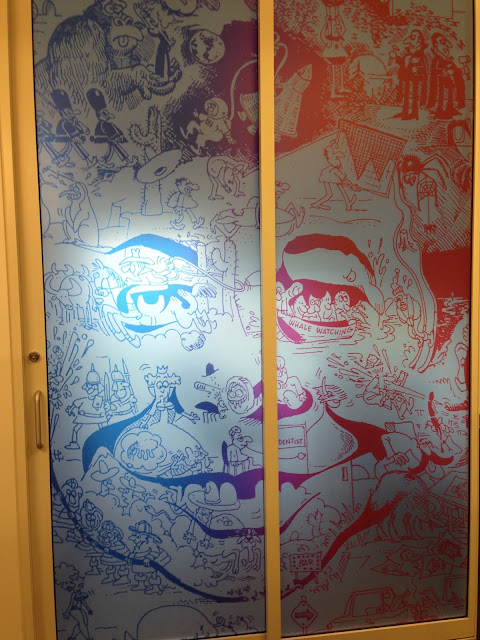 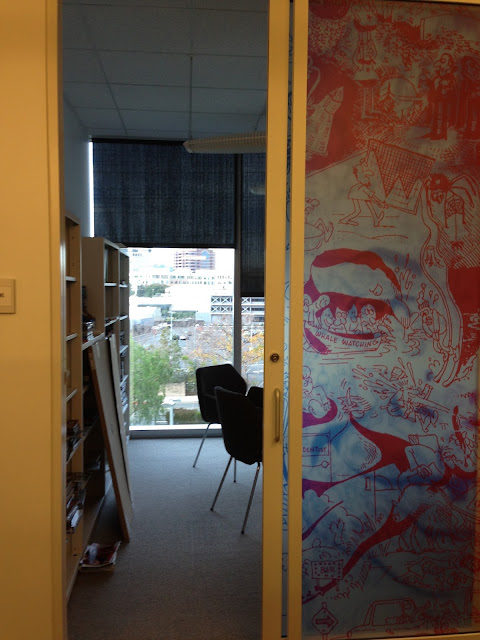 Posted by Marie Javins at 9:00 PM No comments:

This video popped up after years of languishing in obscurity. It's the band Unrest, in 1992.

Shot on the roof of our Mercer Street, Jersey City shared house. Me, Marie, and Otis...we had bands staying over all the time. We had a duplex with 1.5 baths, and the setup worked great for guests.

Watching this, I remembered the time Marie and I crimped drummer Phil's hair. The Jimmy D's T-shirt I wore frequently, courtesy Jimmy D himself at his music store in Cincinnati. The crazy late nights at Maxwell's, the eternal need to be on "the list."

Looking back now, it all seems so innocent and frivolous. But fun. Lots of fun. 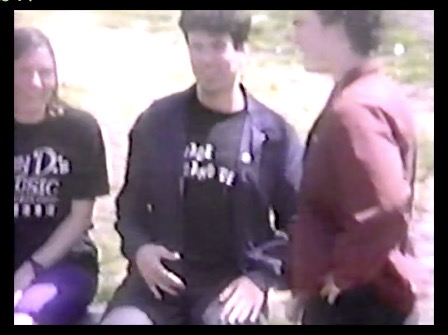 Posted by Marie Javins at 1:14 PM No comments: 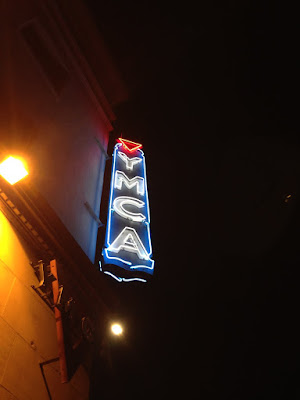 I'll probably get in 8 at the most, I imagine. I went over the weekend and my arms still hurt. I'm definitely needing to go more often, but there's work and then there's work, and maybe some work.
Posted by Marie Javins at 11:57 PM No comments: