Hanging on the Telephone

They seem so gross now. Not to mention broken. 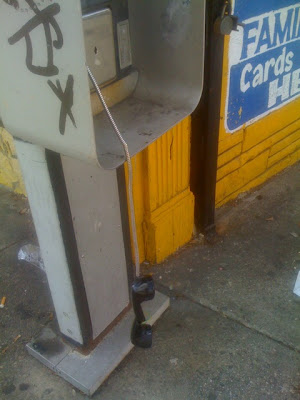 Posted by Marie Javins at 6:27 PM No comments:

Packing Up the Guidebooks

Ugh, I have all these old guidebooks to throw out or recycle. I don't know if you can recycle paperbacks—what about the glue in the spine? 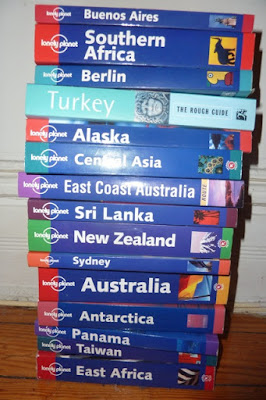 You can tell these are really old by their design. The current Lonely Planets don't have bands across the top and bottom.

How old are these? Embarrassingly old. I used the East Africa, Central Asia, and Berlin ones in MariesWorldTour.com 2001. Eek. The information in these books is not going to be real useful to me.

Or to anyone else. I can't even donate them.

But I've learned my less and am being proactive this time. I bought a lot of Bradt guidebooks before I left home for my 2011 trip. I took notes, scanned in what I could, and left these heavy books home in favor of my Kindle.

So now, before they get old, I've boxed them all up for trade-in. Angola, Nigeria, two copies of the Congos guidebook, and a Lonely Planet Tahiti, all going out to the third-party reseller. I can't even take the time to sell these myself on Amazon, or they might end up past their pull date.

At Least They Were On Sale

Sometimes you have to buy the whole box to get the stegosaurus. 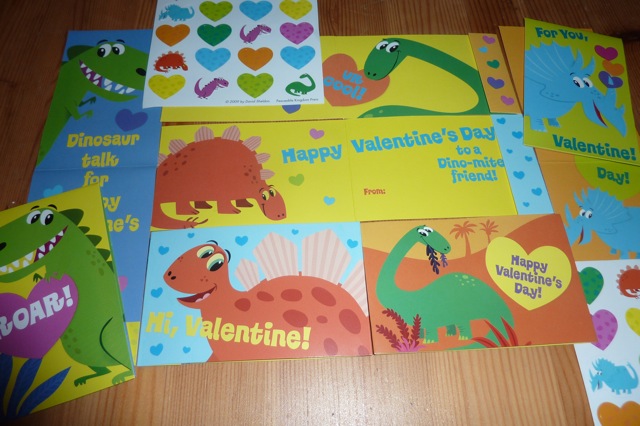 Posted by Marie Javins at 5:43 PM No comments:

I found an old 3G iPhone in my electronics recycling pile when I got home from MariesWorldTour. (When Ray sublet from me, he wasn't sure what to do with some old hard drives and a broken iPhone, so he asked me to recycle them, which I can as a resident of Jersey City.)

I don't think he counted on my fascination with taking things apart, though.

The 3G phone wouldn't turn off. The case was broken—Ray found it on the ground, cracked and semi-functional—and the power switch doesn't work. I tried to erase the phone but can't get past the start-up pineapple icon. I tried letting the battery run out as a restart, but I still get the pineapple when I plug the phone in. (iPhones unlocked with the pwnage tool give you a pineapple instead of an apple.)

The next step is to take the case off and sort out the on-off switch manually. I ordered a $14.95 back case for this thing, which might help, but I may still end up with a pineapple that won't stop when all this is over.

But look at all the fun I'm having in the meantime. 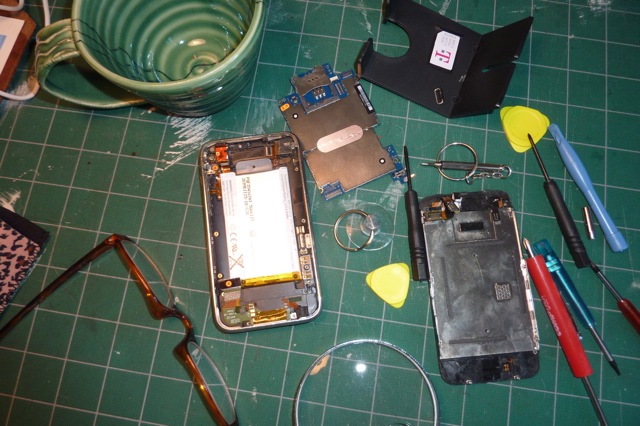 Posted by Marie Javins at 10:16 AM No comments:

My Month in Ubud

I put together some of my photos and a little video footage into a summary of the month I spent in Ubud in October during MariesWorldTour.com.

I took AirAsia from Bangkok to Singapore, hung out with my friend Stephanie overnight, then headed to Bali. After a night in a hotel in Ubud, I found Gerebig Bungalows in the rice fields of Penastanan, and rented the top floor of a new bungalow, complete with wifi, pool, and daily cleaner. I had a little kitchen and ate my breakfast at home daily, but didn't cook too many dinners there.

My plan was to catch up on work, swim or do some yoga, eat well, and relax.

I caught up on work, anyway.

Click here to see the video on Vimeo.
Posted by Marie Javins at 10:16 PM No comments: 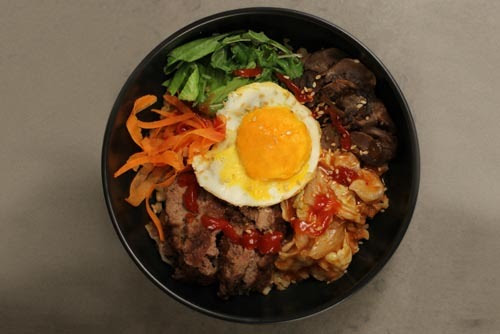 On Wednesday night, I headed to the opening party for the new Fancy Fast Food book.

Fancy Fast Food is a project by a fellow travel writer, Erik Trinidad. I know Erik from travel events around Manhattan (plus he's been to Bundt Night), and a few years ago, after we attended a reading a Half-King on the outskirts of Chelsea, Erik was hunting for a Wendy's. Or something like that. The details are blurry. All I remember is that he needed ingredients to food-style something gross into something stunning (but still gross-tasting). Check out his blog to see things like McBibimbap and Chicken Pizza Masala (Pizza Hut).

Erik has made a book now, complete with recipes and stylized photos of his silly foods. His friend Moe illustrated it, and the book looks marvelous. Plus, I had a great night out with Roberta, Ray, Carly, and for a while, Moe.

I am also grateful to Erik for linking to MariesWorldTour.com from his Discovery.com article on quitting your job to travel the world.

How to Write About...

My writer friend Zora tweeted a link to this article yesterday.

Brilliant.
It's called "How to Write About the Middle East," and it's based on an important Granta piece called "How to Write About Africa."
These are two places I've lived and worked in, and while I can see why people fall back on easy conventions, it's super-lazy to do so and utterly unrealistic. Do readers really accept that Africa is just lions, disease, and poor people wandering around being noble in their poverty? That the Middle East is all veils and religious zealots? What horse shit.
I've had my share of citizen-reviews where people have decried my lack of BS about the beauty of the noble savage and the stunning sunsets of Africa. I don't respond, because people who say such things aren't particularly interested in the real as opposed to the fictitious Africa of pop culture and their one safari experience. Did they even realize they had crossed a boundary, paid an admission fee, and entered a national park?
I owe a debt to the writer of "How to Write About Africa." When I smart from people declaring that my work doesn't cover "the beauty that is Africa," or that my work is mostly about me and not about some animals and sunsets, I read this article again and remind myself that that's what I do, write about myself. That I cannot and should not lie and create some bit of fiction that we tourists or guest workers are actually able to penetrate beyond the superficial in any society, and though this isn't in the article, I honestly believe that all our supposed local experiences we have abroad are limited. I believe that taking the local bus or van is the easiest, fastest way to meet non-tourist-industry locals, but don't be surprised when the citizens of the country you visit are the same as everyone you know at home.

The Middle East article is also apt. When we find ourselves making assumptions based on a bit of sensation, we'd do well to remind ourselves that people abroad as just as diverse, smart or stupid, complicated or simple, religious or secular, clean, dirty, funny, or smart-ass as people at home. 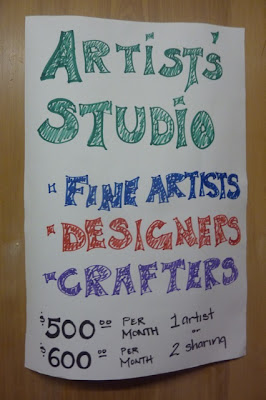 There's been a new development coming up across the street from me for several years now in what was once a hospital.

The center part was demolished. In the plans that I originally saw when I went to a neighborhood meeting, that part was intended to be condos and town homes. This part is now the vacant lot where we had a mini-golf course in 2010.

The main hospital tower and former parking garage did become condos and retail space. That's where my gym is, along with a lot of fru-fru places that are kind of awesome and kind of absurd (cupcakes, wine, gourmet pet products, dance school, organic grocery).

The other section hasn't been touched yet. It was previously a nursing school and eventually, rather than sitting empty, the developers rented space to an optometrist, a nursery school, and an arts center.

Even better, they've now agreed to let artists rent studios on two empty floors via the Jersey City Art School, which is a relatively new organization created by a remarkable go-getting painter from the New York Academy of Art. These rooms used to be dorms for nursing students, so imagine spaces that would house two single beds, two closets, and sets of drawers. 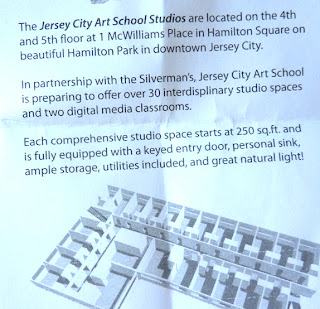 I took a look at the studios the other day.

I'd love to set up my sewing machine, woodworking materials, and a computer in there. I could leave the house to be productive. And the studios aren't expensive—only $300 each if you share with a friend, or $500 for a solo studio.

But then I'm forced to admit that I just got back from an expensive expedition, haven't yet looked for employment, have a complete home office, an office-office in Manhattan that I can use anytime, and oh, an entire small room in my apartment that I don't use at all.

So I can't have a studio.

But I really want one. 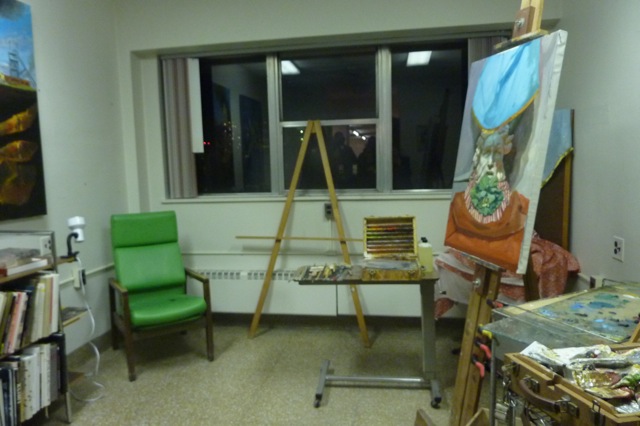 Posted by Marie Javins at 12:54 PM No comments: