I got my very own Oyster card yesterday at Heathrow. 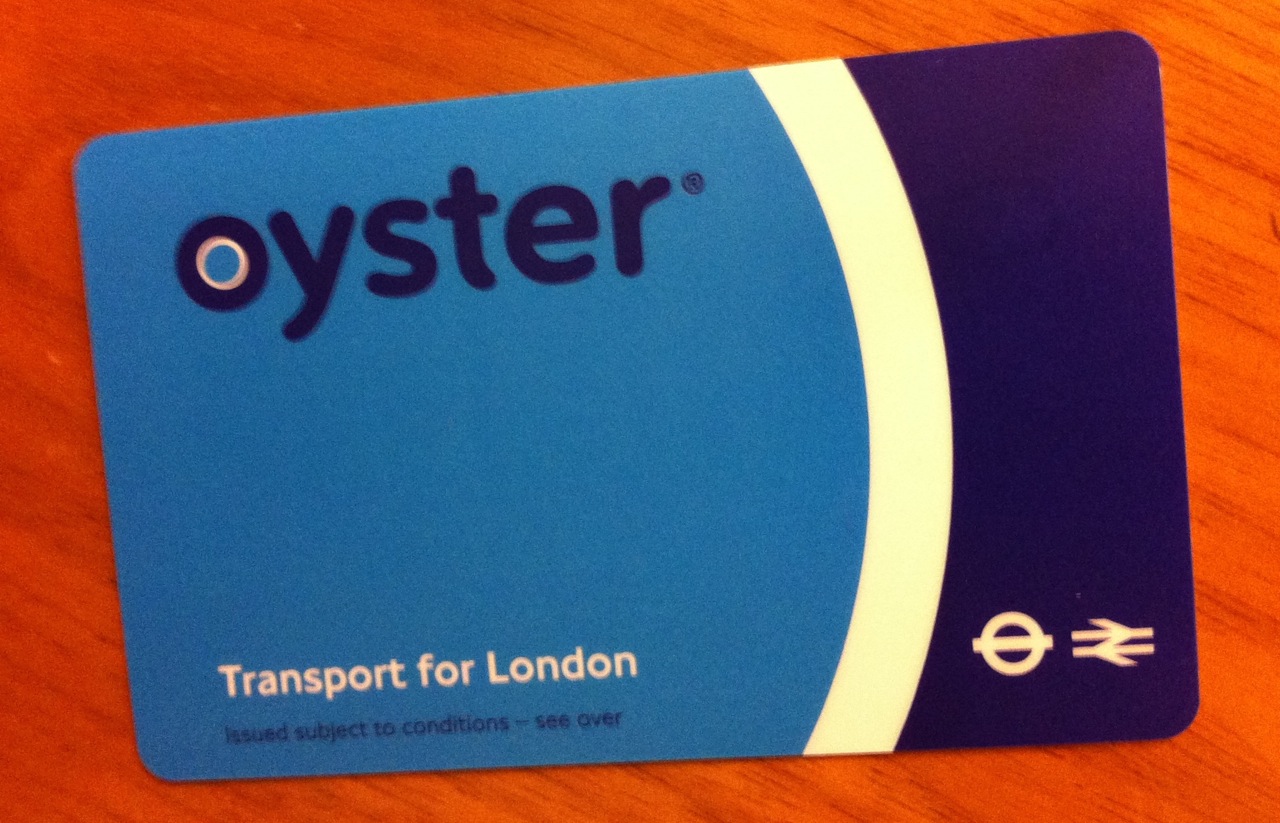 It's a little tap-and-go thing, like we have on the PATH train at home. You get a great discount on each trip, of course, but it's not like I'm traveling around London all that often. Right now, I'm just passing through on the way to Birmingham for a convention.

The only reason not to get an Oyster card is the five-pound deposit, but if you buy the card when you get here, you can turn it in when you leave and get your deposit back. And the compelling reason to get on this time versus relying on single-day Travelcards is that the cheap Hilton I prefer here (due to the pleasantly low Priceline bids I get on it), is on a bus that goes right to the train. And buses no longer accept cash, so if I want to ride the bus, I need a card of some sort.

And the last thing I want to do tomorrow morning when I need to get the train to Birmingham is figure out how to get to the tube from my hotel without a card. So fine, now I have a card! And I could turn it in before leaving and get my deposit and balance back, but I'll probably just keep it for next time. 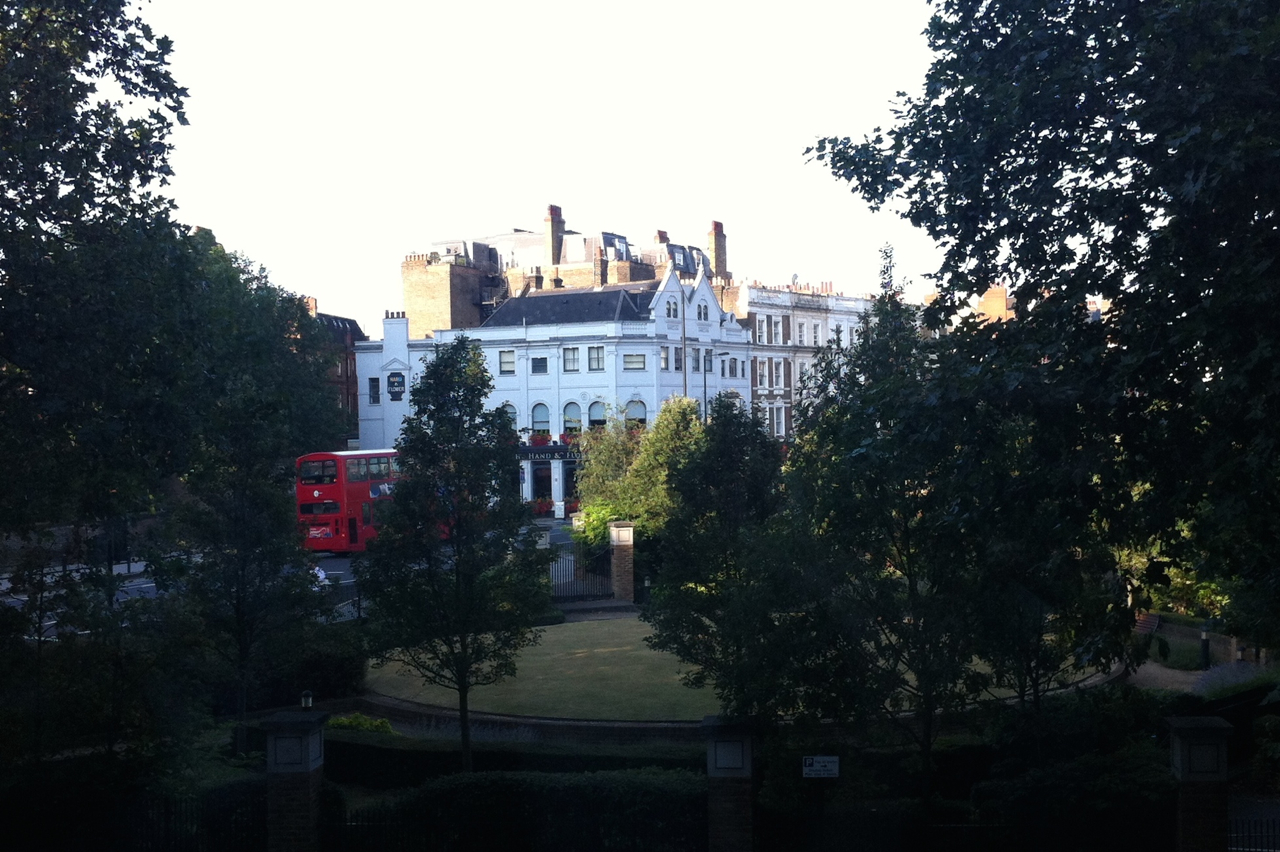 Posted by Marie Javins at 9:59 AM No comments:

I've been working the last seven weeks. A lot.

But less than usual. Just...different. Because I'm back working in an office now. My last regular job ended about 14 months ago, when Kraiger and I shut down the New York office of our Kuwaiti company. And at that point, it was just me in the office anyway. Kraiger had left at the end of April, and I was the last staffer standing.

I've worked in plenty of offices, which is why I knew to cut myself slack in the start. I'd be tired, I knew. And boy, was I. The mere act of commuting, sitting in a room and going to meetings, then coming home wore me out. 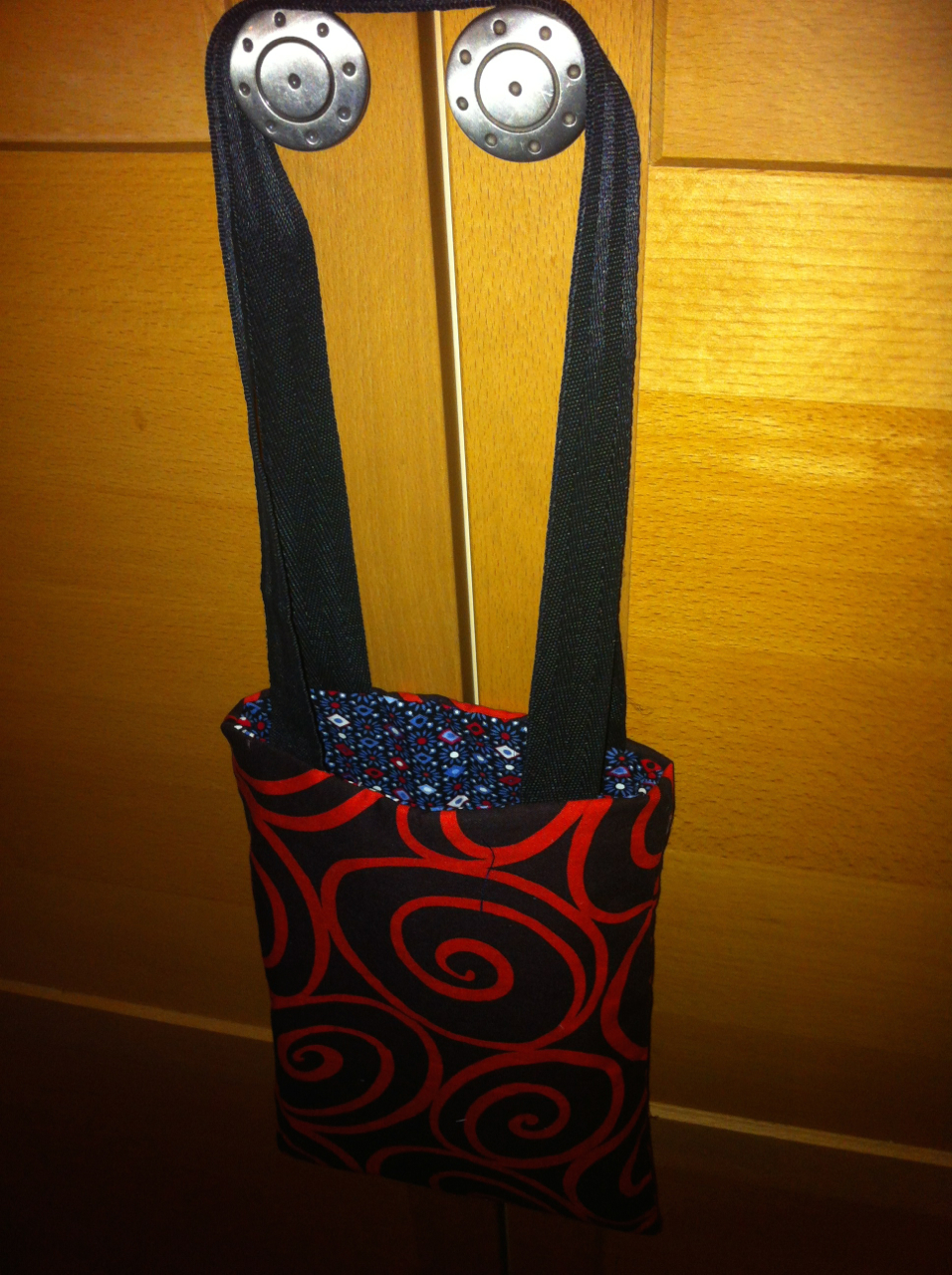 But I always work a lot. I write books, which is a huge job, but also a solitary job. Mostly. I love writing the Marvel Art of books, because I get to Skype with all kinds of interesting artists and filmmakers, but mostly, I sit alone by the window in front of my computer. That's how books get written.

And now I'm back in an office, at DC Comics until January, when I'll switch back to Art of. The plan was originally for a position less intense, but the job evolved within the first few hours, and now I'm overseeing a project of massive scope.

Which means I work late a lot and I spend a lot of time wondering what happened to all my energy.

I've been eating a lot of broccoli and sweet potatoes and blueberries...things I think are good for me under this circumstance, and I've been getting plenty of sleep. But when I needed to decompress, I found I couldn't.

So I've taken up pottery, which is a ton of fun (though I am dreadful at it). And tonight, I sewed my first bag in a year. The straps are too wide and too long, so I'll have to go to Pacific Trimmings and get more webbing, but the bag itself came out nicely. Making stuff is so fun.

Posted by Marie Javins at 10:31 PM No comments: 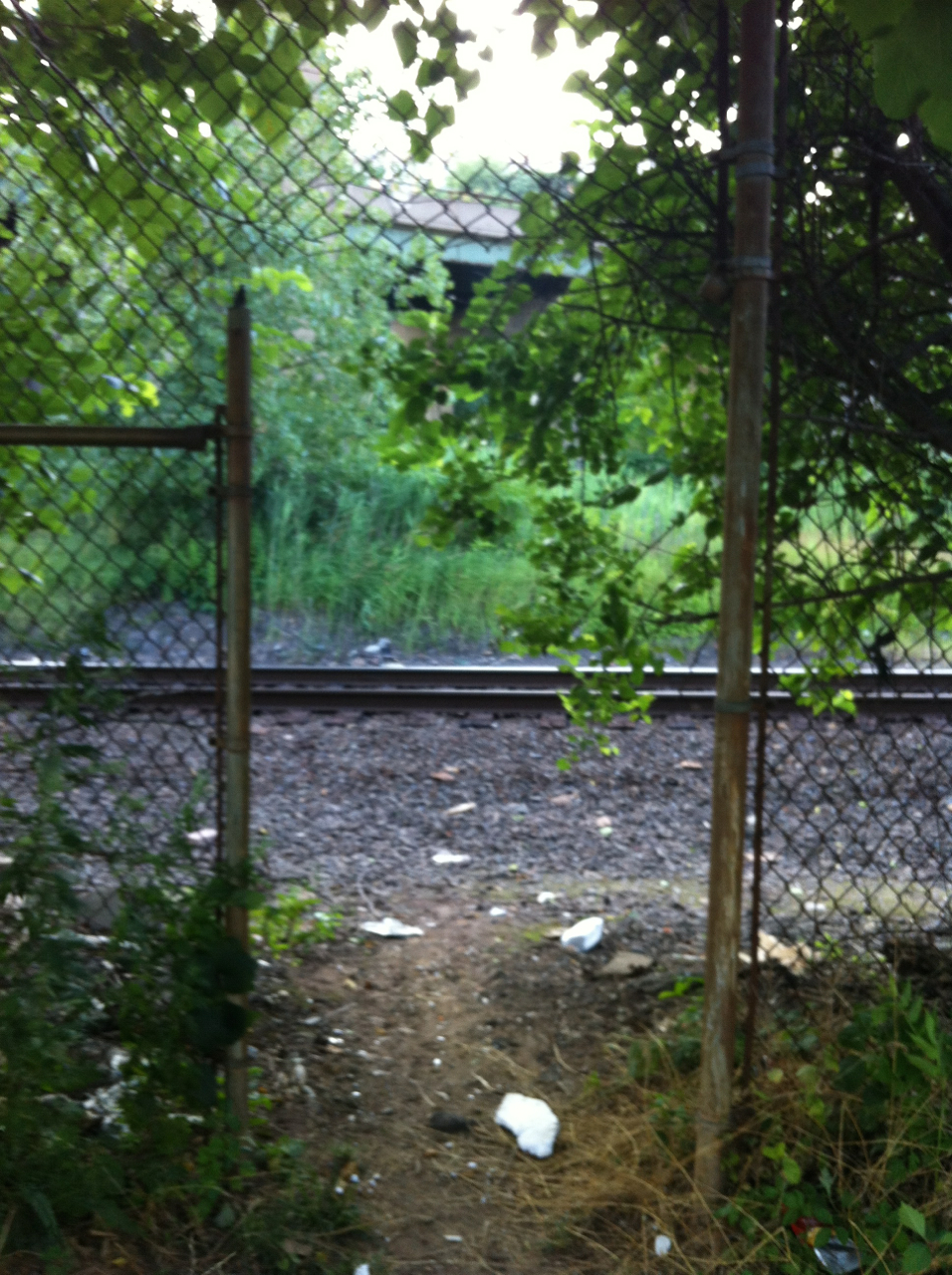 I've been wanting to go wandering in the Erie Cut (aka Bergen Arches area) for years now, but my friend Kraiger keeps sternly ordering me not to go into this semi-wild area alone. You just don't know what's back there. But he's been too busy to go with me. What could be more important?

Last night, my neighbor Denise and I were out wandering around after going to the Polish festival, and we passed a hole in the fence that runs beneath the ramp from Exit 14C—the ramp that feeds the NJ Turnpike to the Holland Tunnel. This part of the fence has been there as long as I remember, but the part near the former home of the Jersey City giant cat is new.

In we went, tripping over the gravel along the railroad tracks.

"Is that a rat or a groundhog?" Denise asked, pointing ahead at a mammal crossing the railroad tracks. 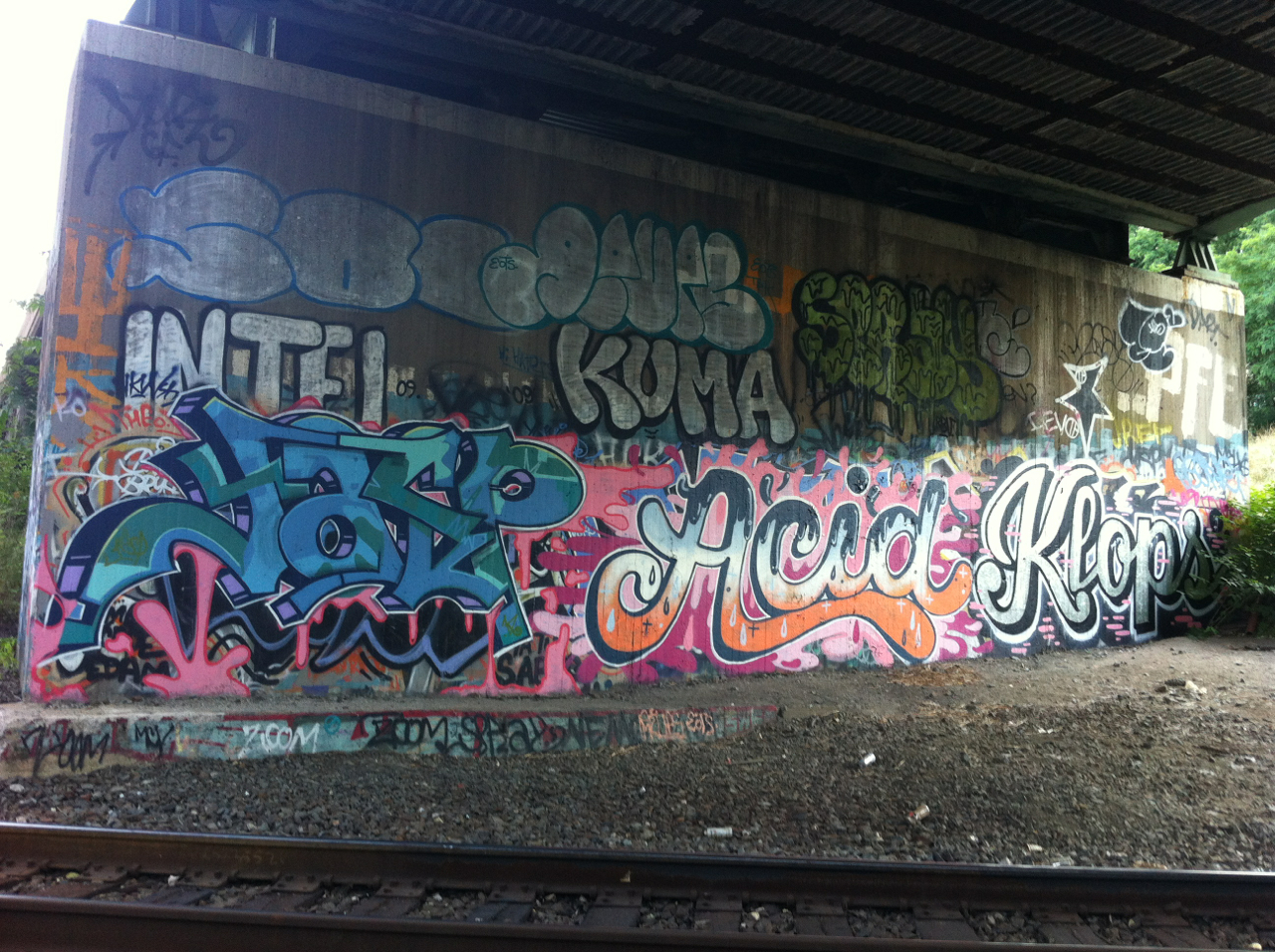 We stopped, then. The black tunnel up ahead was a bit too intimidating.


"From 1906-10, the Erie Railroad Company drove 5,000 feet through Palisades rock, from Palisade Avenue on the east, to Tonnele Avenue on the west, in order to bring passenger service to the Jersey City waterfront. The "Erie Cut," as much as 85-feet deep, was punctuated by the Bergen Arches, a series of concrete bridges that supported cross streets overhead. Today the site has returned to nature, with moss and vines covering the bridges and cliff face. It is a serene, pastoral world apart from the busy avenues that cross it."
-Jersey City Landmarks Conservancy 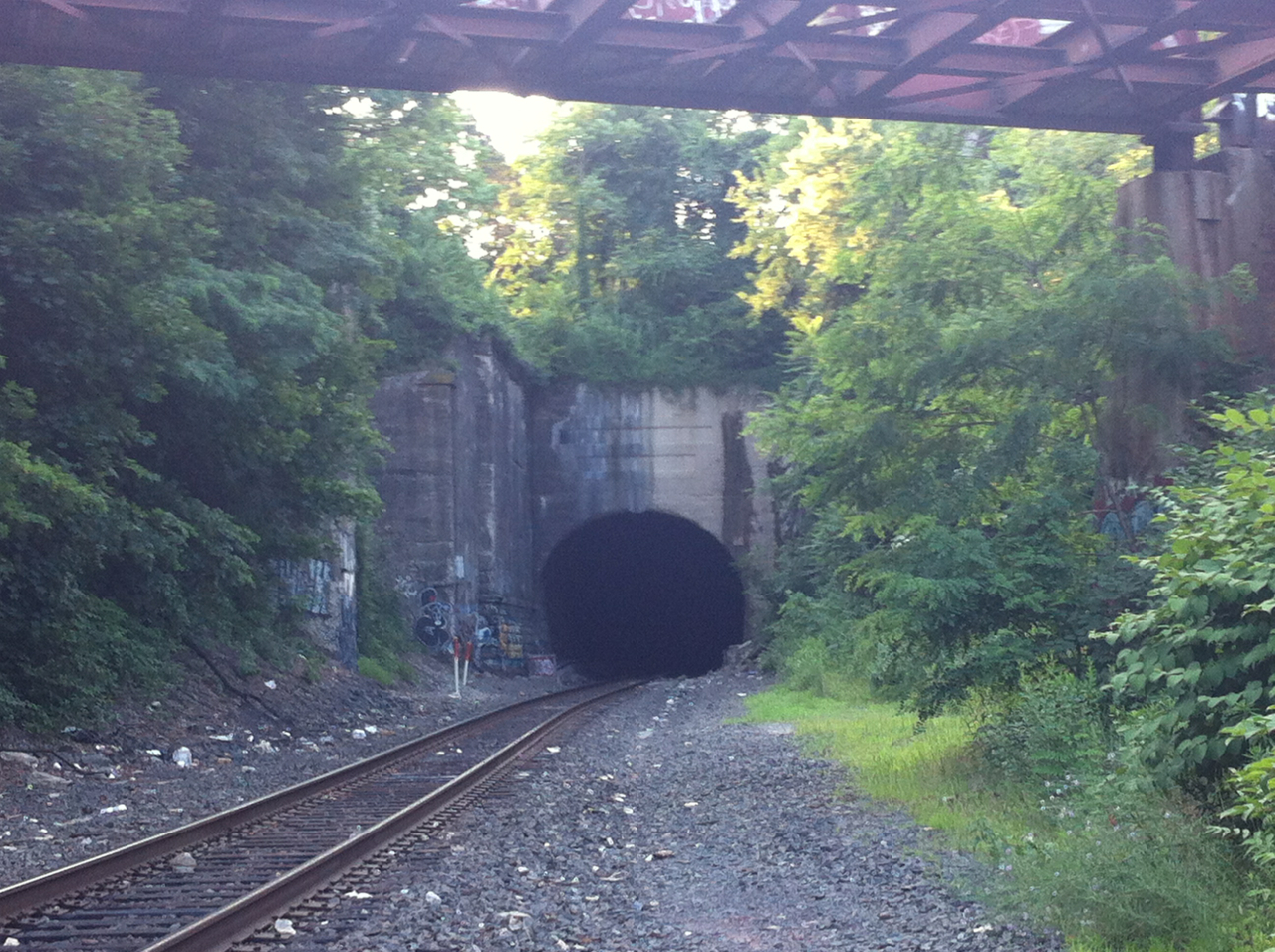 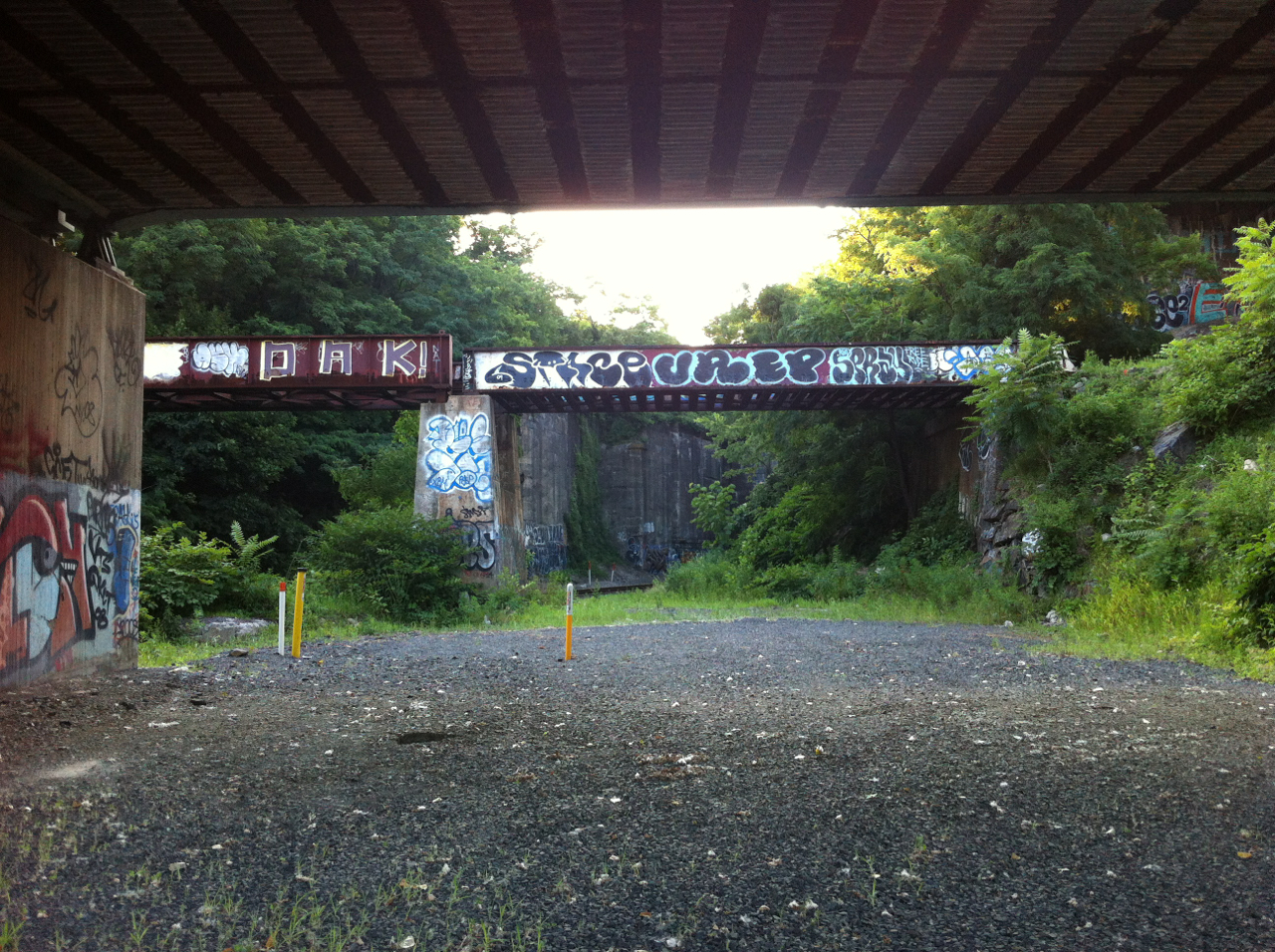 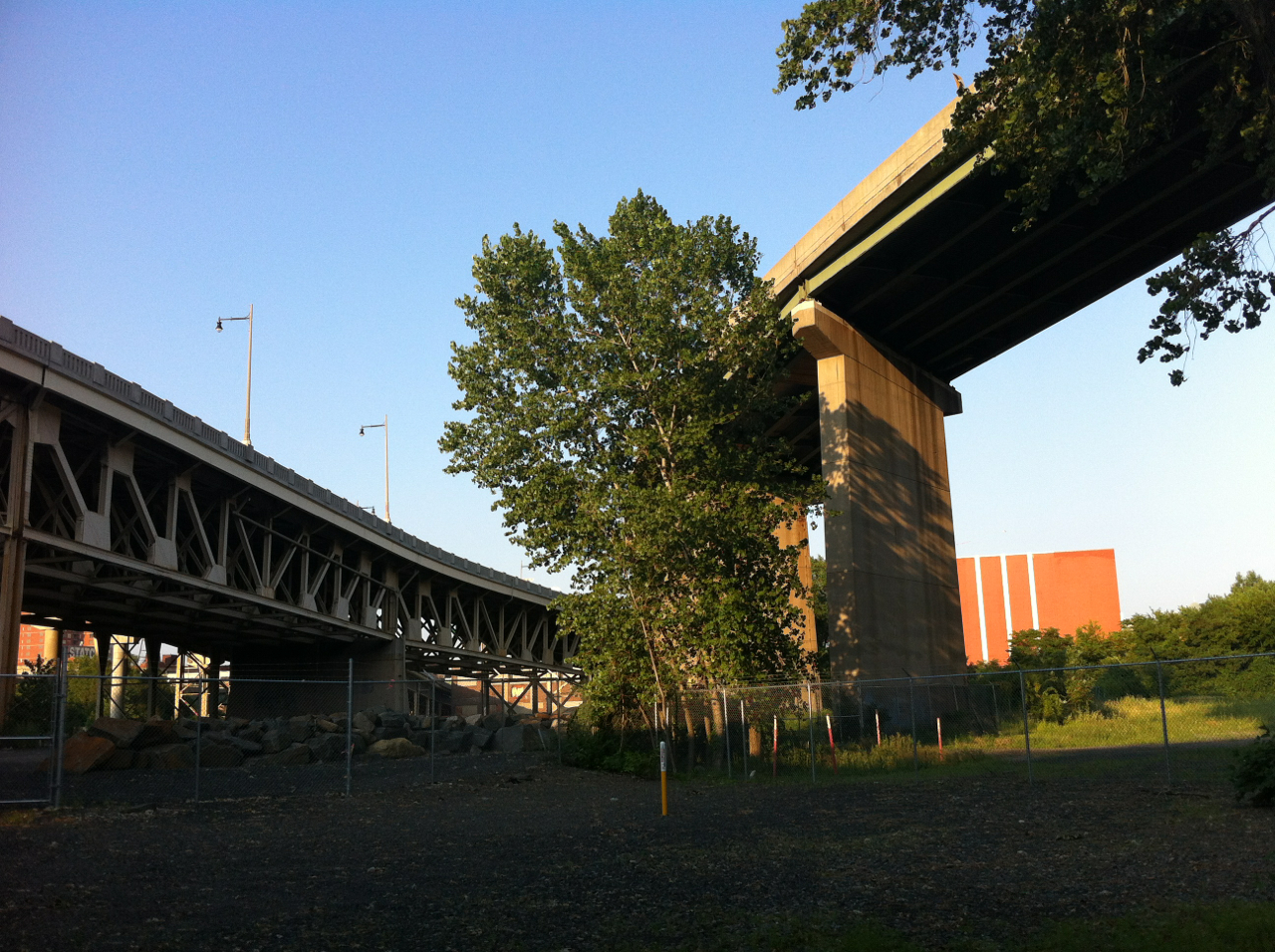 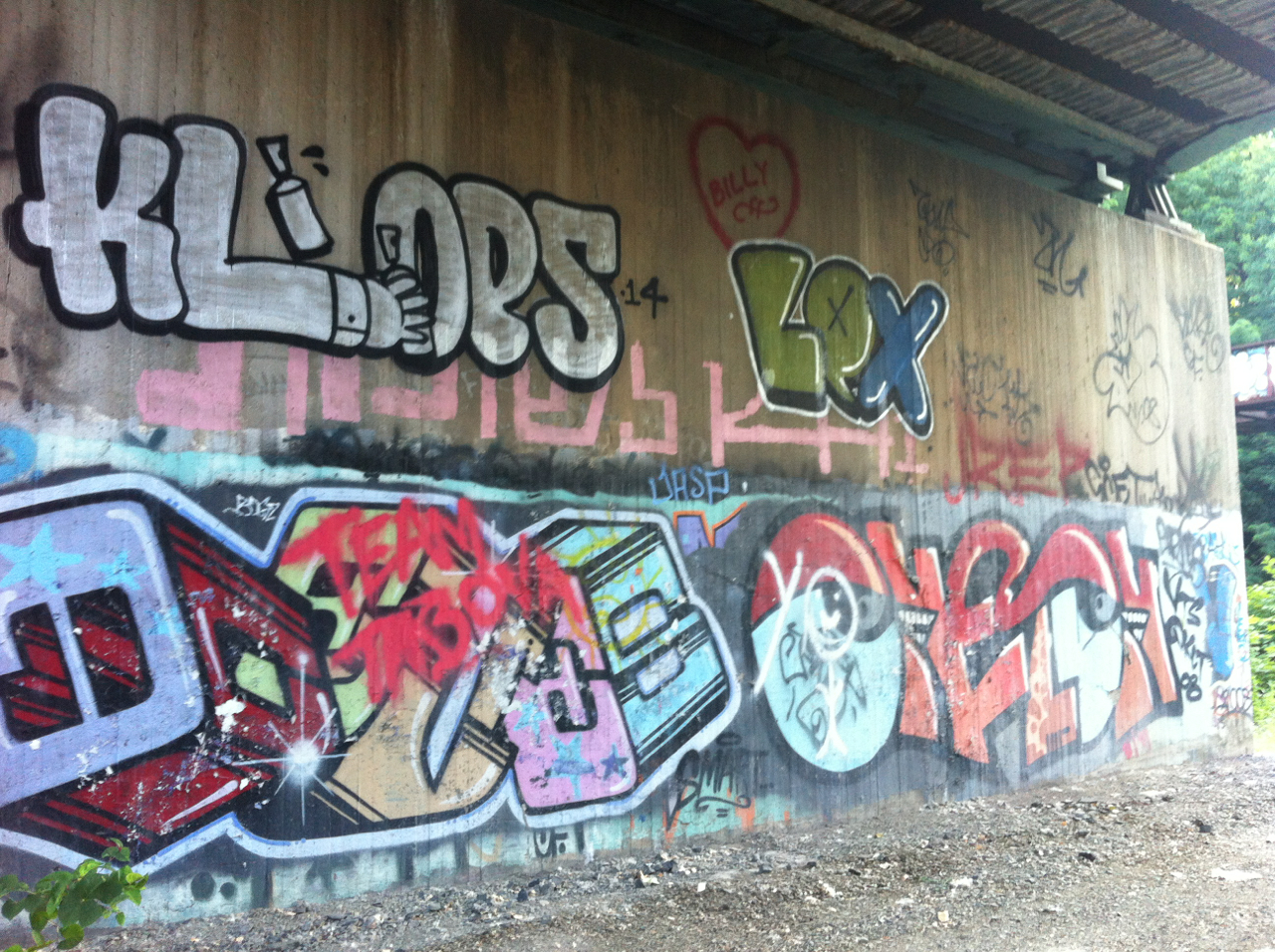 Cheery thought for the day.

Choose Your Own Adventure:

If you can tolerate the desperation of returning to the place you just left to run around in a hamster wheel while looking forward to sleeping late on the weekend, go to work.

If you choose the pressure of never knowing if you'll have cash for rent or food while you have a bit of dignity, go to freelance.

Both paths lead to obscurity, eventual illness, and death, so choose carefully.
Posted by Marie Javins at 8:06 AM No comments:

I got a response! I think I actually managed to ask a question in Bulgarian. It looks like I have a reservation on the 10:30 minibus from Bucharest to Ruse on August 9.

I'm looking forward to my trip. I am working a day job at DC Comics from now until January, and while I spend a lot of time desperate for sleep, it's pretty fun. But I still want my vacation.

Posted by Marie Javins at 9:25 PM No comments:

I had big plans to spend the summer in Paris, until a temporary editor job poked its head in. But I'm still going to a convention in the UK in August, and taking a normal-human two-week holiday after that.

I'm flying from Heathrow to Budapest, then using trains and buses from there into Romania, finishing up in Bulgaria before flying home via Barcelona.

Here are a few stumbling blocks.

-I arrive early in the morning in Sighisoara, Romania. I'm torn between moving on to Brasov in late afternoon (reasoning I'll have had quite enough Sighisoara by midday and be most keenly interested in napping, and I could use that window of time to sit on the train or bus instead of upending the whole next morning after spending the evening vegging out in a hotel. If I'm just vegging out from exhaustion anyway, shouldn't I do that in the next city instead of wasting the next morning in transit?

-Do I want to spend an afternoon and evening in Bucharest, or two nights in Veliko Tarnovo instead? I have the option of just staying on the train after Brasov and getting more travel done at once, and the border crossing otherwise involves one of these: 1) a 25 euro taxi ride between border cities 2) a late train which wastes the whole day or 3) possibly a shuttle at 10:30, but it's hard to find info so I've e-mailed the operator.

I wonder what I really wrote. Here's what Google Translate gave me.

Posted by Marie Javins at 9:20 AM No comments: