48 hours ago, if you'd asked me "What do you think Christian Cooper would be famous for," I'd have guessed for something he'd written, a science fiction book or maybe the Star Trek comic he used to write where he introduced the first gay character in the history of Star Trek. Or maybe I'd have said "He was featured in that documentary about Central Park birders," because he's a dedicated and locally famous birder. He gets up at some obscenely early hour in the spring so he can be at Central Park by dawn to watch migratory birds.

If you wanted to dig in more to his background, I might have told you about his global travels, his days editing at Marvel, how he's a Harvard grad whose friend from college was the first male ob/gyn I'd ever met, or how he'd jumped through all the hoops necessary to get a small condo in the East Village back in the day, and he'd made his exclusive roof rights into a tiny, green paradise. I might have mentioned he had a fabulous 30th birthday party at a private mansion which inspired me to do the same a few years later (at the Frying Pan lightship). He hired a few drag queens to come to his party--were they telling fortunes? I no longer remember. I might even have mentioned I vaguely remember he knows some Klingon, but maybe he just had the Klingon dictionary and I read a lot more into that than I should have. I probably would have told you that Chris is never one to back down from taking a stand on a moral issue. He's gone to his share of righteous protests.


I would NOT have anticipated that early yesterday morning, an angry middle-aged woman of some apparent privilege, a white woman investment banker with all the clichés that description carries, would go on a hysterical rant at Chris when he asked her to leash her dog in a migratory bird habitat in Central Park. She got up in his face, she called 9-1-1 and made a false report claiming she was being menaced by "an African American man," ramping up her hysteria while also nearly choking her cocker spaniel. 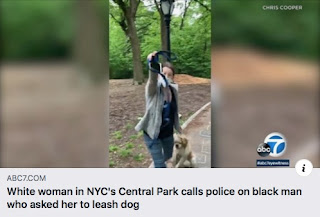 This would have been merely a small chapter in the ongoing battle of birdwatchers vs dog owners but for her phone call.

She used the term "African American man" as a weapon. Her intent was crystal-clear in the video--which has gone viral with millions of views. I woke up this morning and checked to see if any outlets had picked up Chris' story. Holy smokes. Yes, dozens and dozens of outlets have reported the story and posted the video. "White Dog Owner Calls Cops on Black Bird Watcher, Goes Viral." "Central Park Confrontation Goes Viral, as White Woman Calls Cops on Black Man Over Dog Leash." "A video of a white woman calling the cops on a black man because he asked her to leash her dog in Central Park Monday is drawing outrage on social media."

Chris was indeed guilty of asking her to leash her dog and offering the dog a treat. Watching the video is shocking, because Chris is calm the whole time, but assertive. He's asking her to follow the law, or take her dog to the section of the park where off-leash dogs are allowed. She immediately ramps the tone up to crazy-town, and then she places a false emergency call to 9-1-1. When I watched the video yesterday, I assumed she was full of shit, putting on an act of placing the call to try to intimidate Chris (I could have told her that wouldn't work). But no, she legit filed a false report. Admitting it ON CAMERA.

On a video now seen by millions. She's been suspended from her job. Her dog has been taken back by the rescue which may have noticed a pattern of emergencies that seem to clearly indicate a lack of respect for leash laws--the dog was always getting hurt and needing emergency care.

She's apologized and said her life is being destroyed. All for what? Trying to get a black bird-watcher arrested and worse--she chose her terms with malice. I don't feel the least bit sorry for her. "Birding while black" is not a crime.

Chris, however, says he has no beef with her so long as she keeps her dog on a leash in the Ramble.
Posted by Marie Javins at 8:30 AM