More Past Lives of Real Estate

I stumbled over this 2005 NYTimes article while searching for information on a new loft development up the street from my house.

And I couldn't help but laugh a little, because these types of articles pop up over and over, and a few years later, we had a near-collapse of the financial system, and nine years later, I was able to buy my house for significantly less than the women quoted in this article paid for it.

I hope I timed this right. If not, it's still a nice house, even if I can't live in it yet due to be on the other side of the country.
Posted by Marie Javins at 10:48 AM No comments:

Past Lives of Real Estate

Yesterday morning, I realized the 2005 dead link on my blog to the original ad I'd seen for the house I bought in 2015 could be recovered via The Wayback Machine.

I'm so confused. Everything I thought I knew is wrong.

I might be overreacting just a little, but the "original" 1895 tub and sink are someone else's careful restoration, and were not there in December, 2005, when I'd first noticed this house in an Armagno Agency ad.

(Note the ambitious price in this ad reflects the heady days of the impending mortgage crisis.)

I suppose this is what I get for doing all that restoration on my last condo, the one on 8th Street which some unscrupulous agent called "original" when they resold years later.

I am sorry for the loss of the mantel. But I feel free now to just buy a "new" old sink instead of baking on new porcelain to the one I have.

The outside of the house had a surprise too--the protruding section on the side is burnt sienna-colored in the 2005 photo. But now, it's a beige color. I wonder if that's new stucco, or just a paint job. 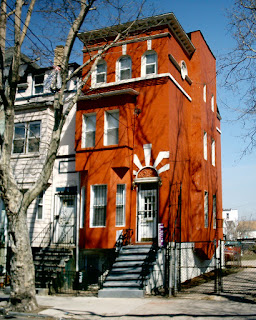 The part that really stunned me was the bathroom photo. I thought this was a mistake, the photo of a bathroom in an entirely different house, until my tenant and I did a little studying. 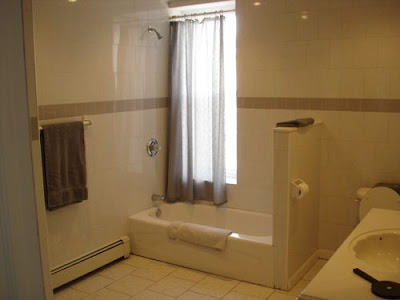 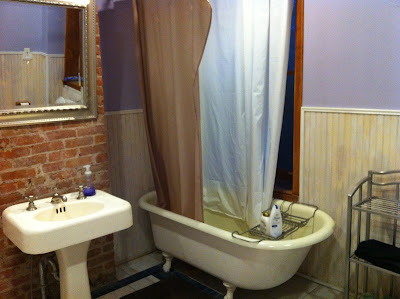 See the tile outline in blue in the photo below? That's where they had to put in new tile because they'd pulled out the block in the first photo. The other clue was from when I'd looked at the house next door from the backyard. "Why would anyone block up their bathroom window like that?" I'd thought. But looking at the first photo...I realized it had been done to more than one house in the row. And when I'd gotten my windows replaced, I hadn't replaced the two in the bathroom, because they were on the new side, and were expensive wooden windows.

Honestly, I should write Lalitha a letter complimenting her family's amazing work. I'd believed this clawfoot tub came with the house in 1895. 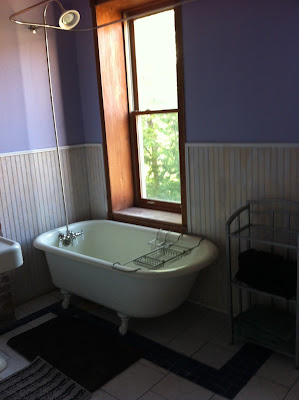 The mantel had changed—I'm not that keen on the new mantel. It seems too large for the room, and I know the chimney is blocked. If I ever want to restore this properly, I'll have to restore the front chimney on the roof. 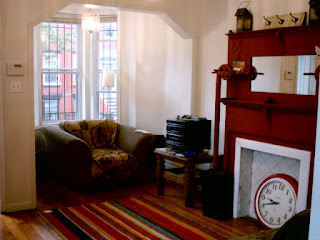 The kitchen--well, we know it sucked when I bought the house. My new BBF kitchen is a vast improvement. And so are the beams Lalitha (the previous owner) and her family installed. 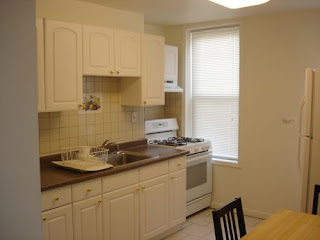 "What bedroom is that?" My tenant was as baffled as I was, until I realized Lalitha and company had purchased old radiators and actually replaced some of the crappy baseboards. Hallelujah. A pity she didn't get to the whole house. ' 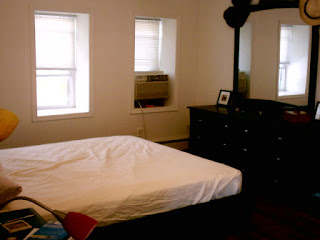 The view, however, hasn't changed. 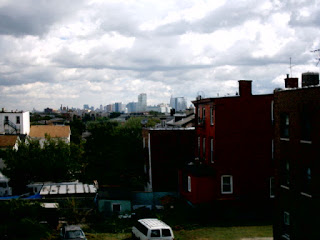 Digging around like this led me to some building permits. I even tried to call the oil tank place to see if they had a paper trail of removing the oil tank, but they seem to have gone out of business. Maybe I can go to City Hall and find out some info on the permit history of my house. 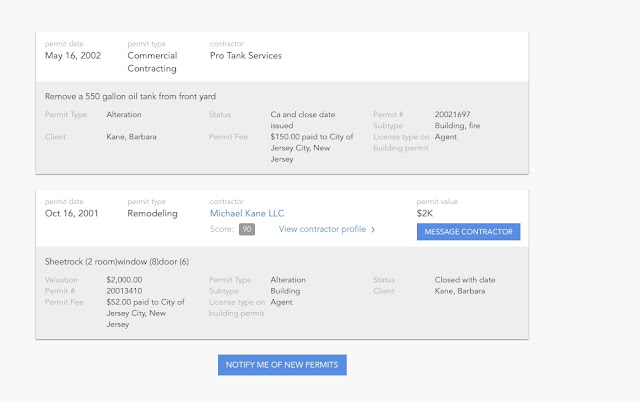 I really am stunned by this sequence of events. I thought I had a house with original detail. No, I have a house with some old-timey detailed restored!

Posted by Marie Javins at 9:24 AM No comments: 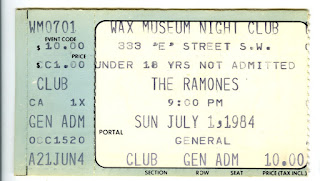 Well, this time, I raced down the first weekend the new exhibit was open, because it was the Ramones show—previously at the Queens Museum, where it had been crowded.

Almost no one was at the Grammy Museum the Sunday afternoon I went, which disappointed me, but this is LA, not New York. I'm reminded of this frequently. Every time I miss home, I'm reminded of this, though I know the NYC that spawned the Ramones has vanished. Hell, the NYC that spat out adult Marie on Avenue B is gone. The original Ramones themselves are even gone. Even the bar Joey Ramone's brother tended bar at is gone, and has been for years.

I don't know how many times I saw the Ramones. I only remember the first time, at Washington DC's Wax Museum with...my sister? The other Marie? Someone in spiked heels stepped on my foot, which is how I learned to avoid mosh pits.

Even then, we were too young, too late. We had only the vaguest sense of what might be going on four hours north of us. 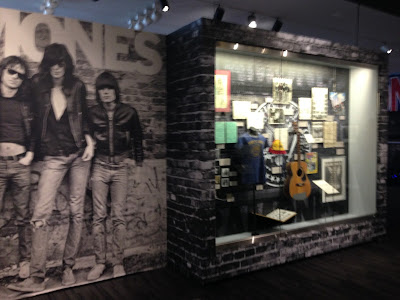 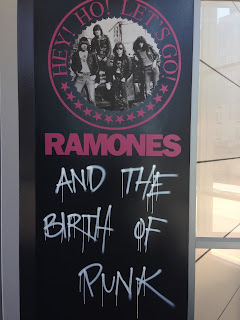 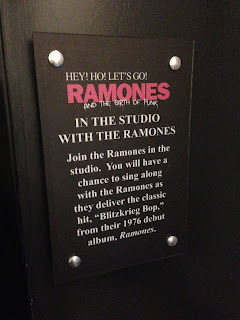 Posted by Marie Javins at 7:00 PM No comments:

Why? What do YOU wear on Batman Day? 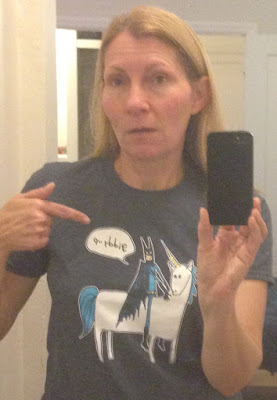 Posted by Marie Javins at 9:00 AM No comments:

I was home for a week in early September, usually the best time of year to be in town, but this year, it was humid, hot, and miserable, with record-breaking temperatures for this time of year.

Still, on the mornings I stayed overnight in the mother-in-law suite of my own house, I'd walk over to Grind, the delicious coffee shop on Communipaw. And pass this row of houses.

As long as I've lived in JC—on and off since February of 1988—I've coveted these beautiful brownstones near Liberty State Park. I might even have been able to afford one if I'd bought back then.

But I'd never have managed the renovations. I can barely handle my current house, half the size of one of these. 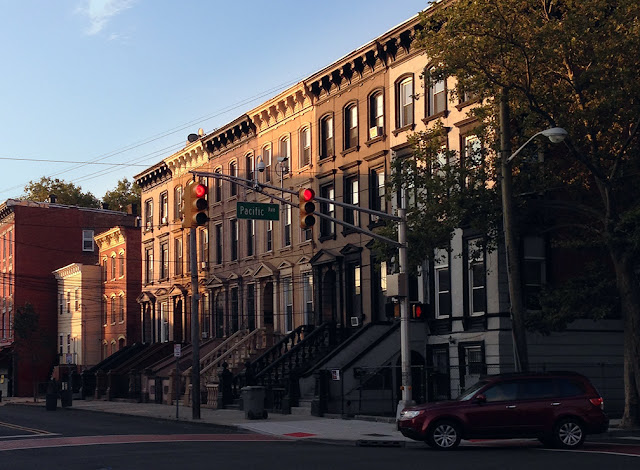 Posted by Marie Javins at 1:36 PM No comments:

It's weird to think how funny the Road to movies were when I was a kid, and they were old news then. Today's kids and so-called Millenials haven't even heard of them. Or him, even, I bet. Heck, they even changed the name of the airport that bore his name. Which is a shame. The last thing Burbank needs is a bit of updating and modernizing. 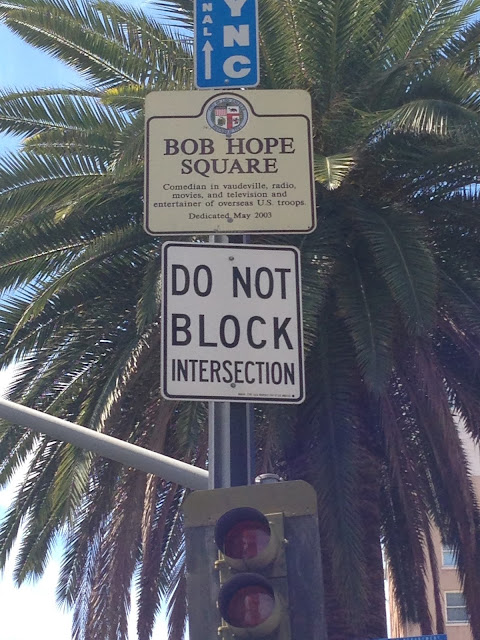 Posted by Marie Javins at 1:32 PM No comments:

Or not so mild. 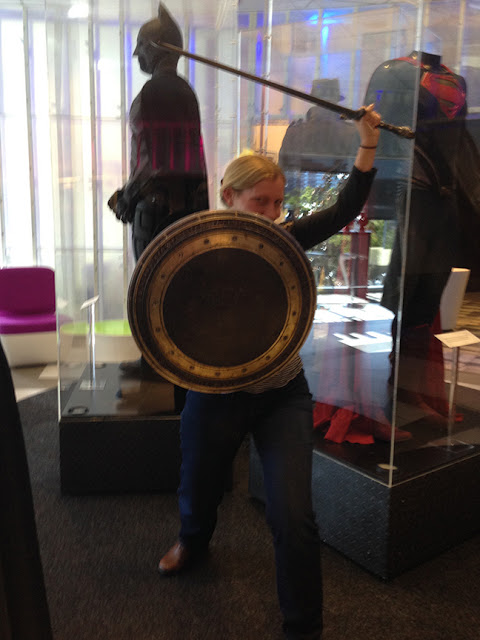 The Final Cutting Board Project

Do you remember when I went over to the late, great 3rd Ward to make a cutting board?

I speculated I'd put off sanding and oiling for a year. Well, it was three years, and in the end, I didn't even do it. BBF carried it downstairs to his basement shop and finished it up there, fixing my inept router work while he sanded.

My cutting board showed up in the mail one day here in Hollywood. The raw wood slurped up the oil quickly, and I had to run off to Home Depot for more food-safe oil. The results are so beautiful I barely want to cut on my cutting board.

"Come home and we'll have a woodshop," BBF taunts me from Jersey City.

Not yet. Still lots of comic book work to be done in Burbank. 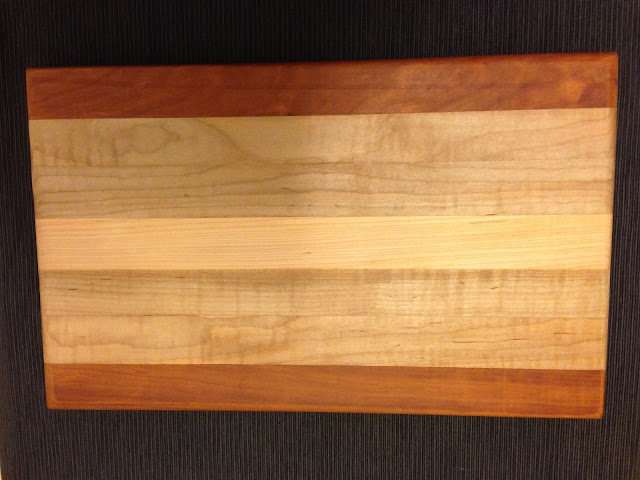