Into the Closest Thing We Have to Woods 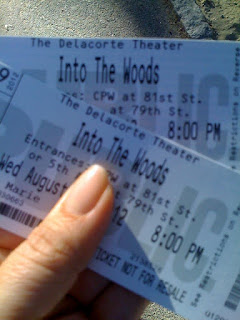 I entered the Public Theater's Virtual Ticketing lottery TWENTY-FIVE times trying to get tickets to the current Central Park production of Into the Woods.

It only took me about a week of trying for As You Like It earlier in the summer. Usually, it takes about one to five tries, but of course when Al Pacino was in Merchant of Venice a few years back, I never won the lottery at all, and ended up forking over the dough for a paid ticket when the production went to Broadway. 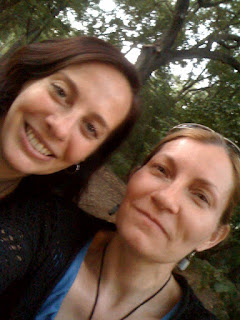 I was stunned when I opened my 1 p.m. ticket results email yesterday and read not the usual "Unfortunately, you have not been selected..." text, but instead was informed that I should race up to pick up my tickets between 5-7.

Great! Roberta and I had been trying to go for ages. I was even thinking about getting out of bed at five in the morning and going to wait in the real line until ticket distribution at one.

We headed up right before show time and saw our second free play of the season. Wonderful.

No, I Didn't Go There

Spotted in Kathmandu about a year ago during MariesWorldTour.com 2012: 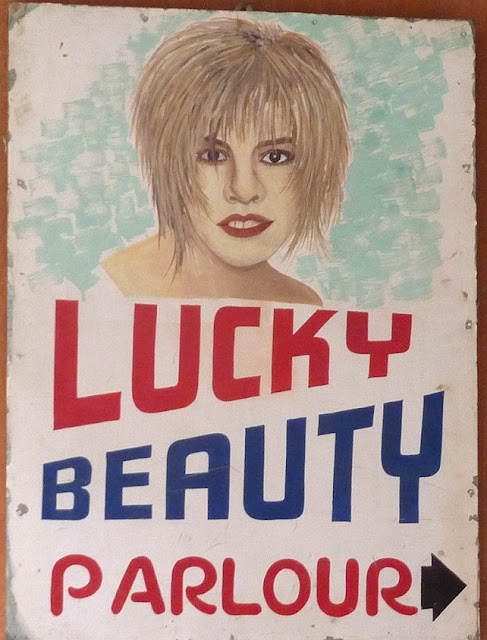 Posted by Marie Javins at 9:13 PM No comments: So instead I proofread a friend's manuscript while sitting in a coffee shop, then walked across the Brooklyn Bridge and back to the PATH train.

Yeesh, that wasn't the smartest move. The bridge was packed full of slow-moving sightseers, all sluggish and lumbering, weighted down by knapsacks and foam Statue of Liberty crowns.

This was one of those ideas that seemed much more atmospheric in my imagination than in reality. I might do it again.

In December on a Tuesday morning.

But I did see this on the bridge, a marker of some sort indicating some imperfection that needs repairing. And it made me laugh, 555, because 5 sounds like "ha" in Thai, and the Thai version of LOL is 555. 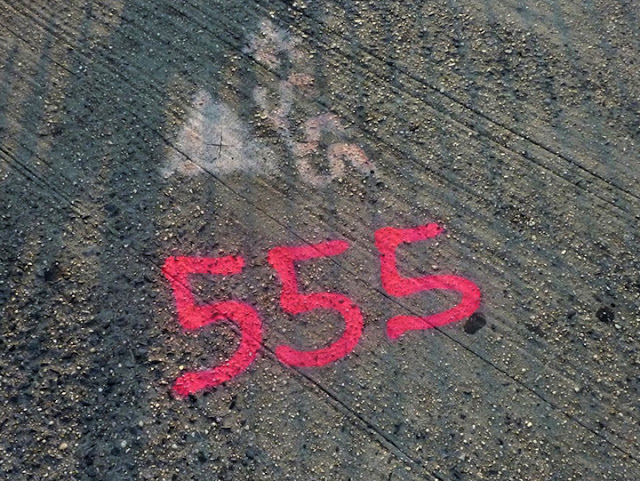 Posted by Marie Javins at 11:32 AM No comments:

I have so much to do today that I can barely see straight, so naturally I went to Google Streetview to hone my avoidance skills.

And here's what was distracting me today.

First, it's the apartment I rented in June of 2001 in Berlin, when I was resting mid-way through MariesWorldTour.com 2001, at 60 Naunynstrasse in Kreuzberg, in what I'm told is now Hipster-ville, much like my old Avenue B block. I was on the fifth floor of a walk-up building here. 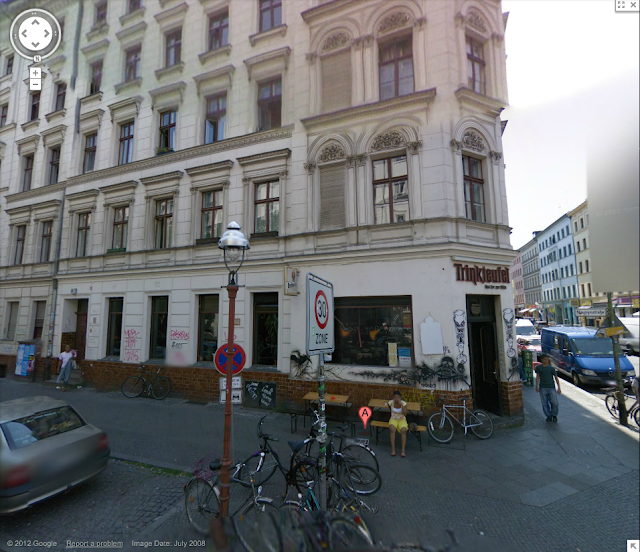 And here is the first place I rented in Barcelona in 2004, on Diagonal. I didn't like it at all--the street was like a canyon, the roar of the motorbikes filling the air. And nothing quite worked, nothing was quite as nice as it had been in the photos I'd seen online (you win some, you lose some). At least this one had an elevator. 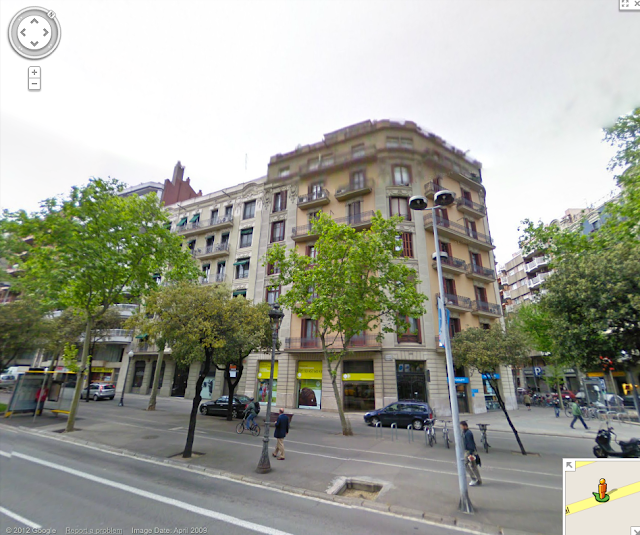 I couldn't even find my real apartment on Streetview--it was on a tiny alley in Raval that didn't merit photos! Here's the outside of the building, from an old post. And here's some inside photos. Nice stairs, right? I had to climb to the sixth story in that building. 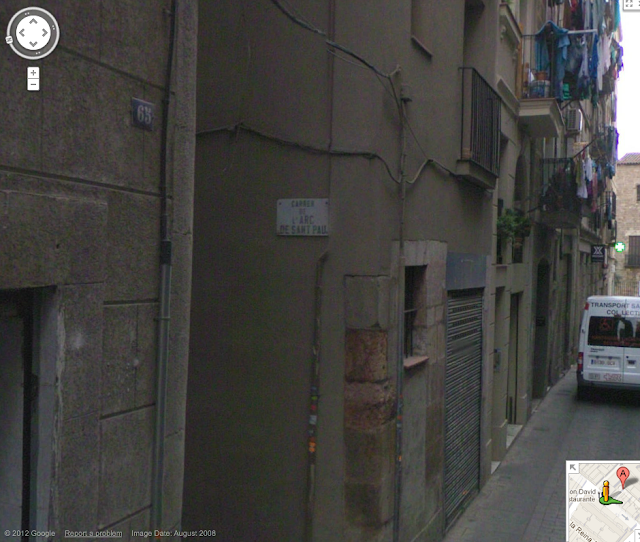 After that my sublets are all documented here on this blog: in Uganda, Namibia, Kuwait, Cairo, and then last year in Bangkok, but that was a month in a hotel, so I'm not sure that counts.
Posted by Marie Javins at 6:36 PM 3 comments:

Categories: Procrastination, Travels with Myself

Murphy in the News

Look at this review! It's Yancey and Andrea's children's book, and amazingly, we'll be seeing it in this Sunday's print edition of the New York Times.

And most amazing (it's hard to get reviewed in the Times)--that's Yancey's art right across the top. And that's a little cartoon Murphy the dog. 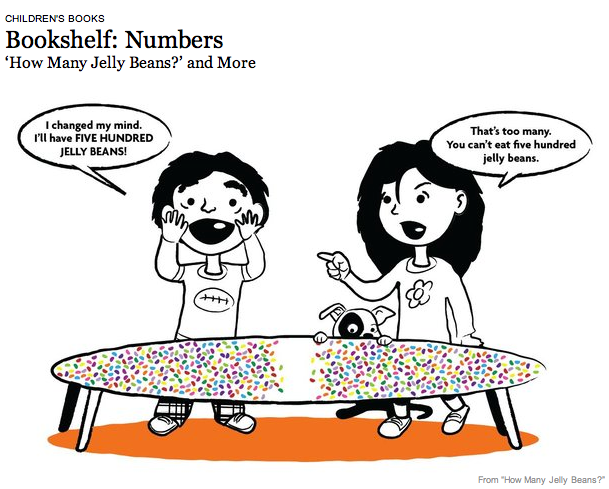 Posted by Marie Javins at 7:56 AM No comments:

I was recently asked for my solo tips for a magazine article, and it came out today!

Here is my contribution. I did add another tip that was cut for either space or irrelevance. I said it's okay to buy two seats in a shared taxi or mini-van.

If you're read MariesWorldTour.com, you'll wholeheartedly agree with that tip. But really, it only applies in a few places around the world--parts of Africa and Indonesia, for example. 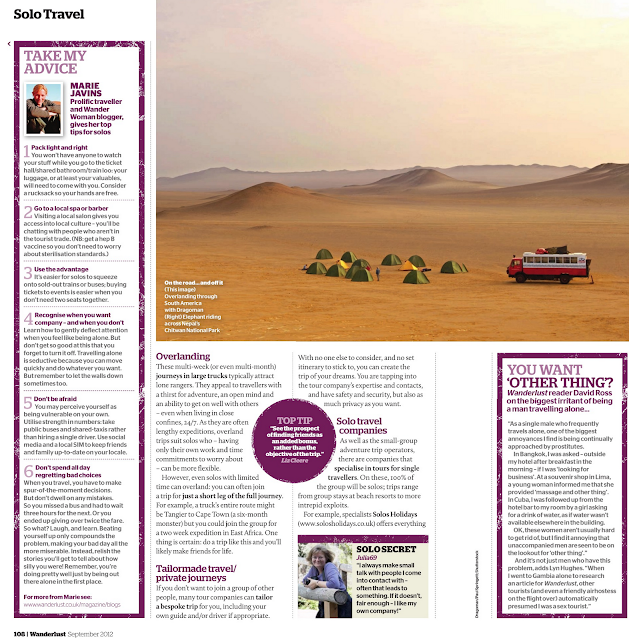 Posted by Marie Javins at 10:49 AM No comments:

Few people write letters anymore. I certainly don't. I sometimes write emails, sometimes text, but mostly I just keep up on Facebook or Twitter. But yesterday I found some letters from 1994 in a file. One of the was from my friend Shannon.

Which is odd, because though people did used to write letters, many of us already were sending emails by 1994. Certainly Shannon and I were online by then. But this note indicated that he'd sent me something along with this letter. (What? I don't know.)

Posted by Marie Javins at 9:26 PM No comments: 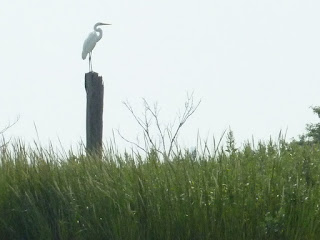 Kraiger and I took the morning off last week and went kayaking in Liberty State Park.

This is free via the LSP Interpretive Center. We went a few years ago, along with Roberta.

We showed up a bit early and chose our Hobies. Kraiger took a paddle one and I took a foot-pedal one. Which I regretted when pedaling hurt like hell, but it turned out the pedals were adjusted for a really short person. One of the interns fixed me up and then things went better.

We kayaked over to the bay by the new golf course, then out to near the Statue of Liberty. We were definitely beyond where we were allowed to go, and when we got back to the launching area, learned the Coast Guard had radioed in and scolded us.

Free kayaking is just another in a long list of reasons I love living around here, even though it's hard for me to sit still. 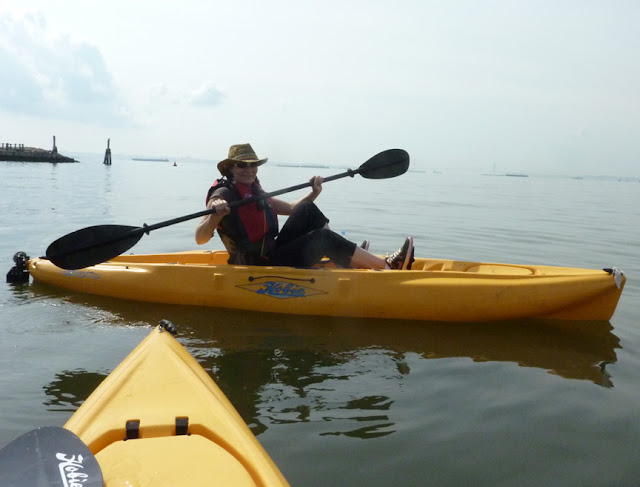 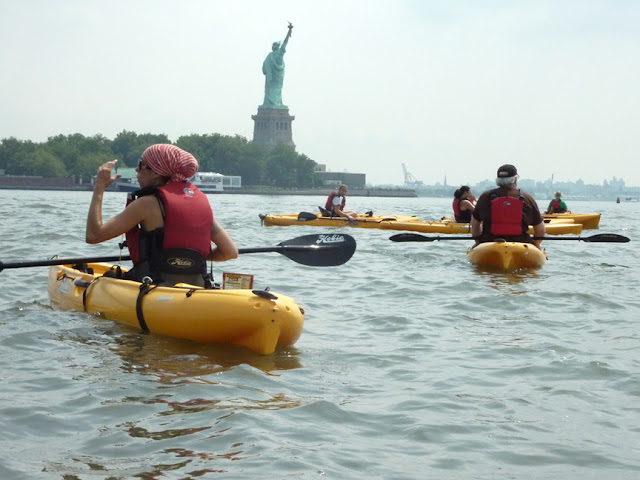 Posted by Marie Javins at 9:26 PM No comments: 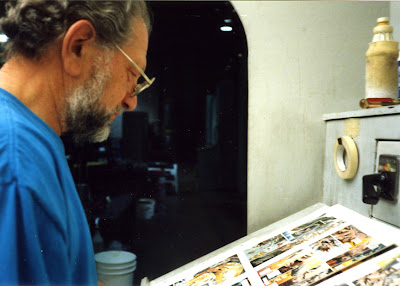 In 1993, when I was an editor in the Epic (creator-owned) division of Marvel, there was a crazy weekend when Joe Kubert, Melisa from the manufacturing department, and I went off to Ohio in the middle of the night to go on press for Joe's first Epic "Tor" issue.

Melisa and I flew Continental, connecting via Cleveland, and our flight ran late, whereas Joe flew direct out of Newark and had to wait at the airport for us for a few hours.

He was annoyed when we sheepishly admitted to flying Continental for the frequent flyer miles.

"Are you an artist too?" The printer rep asked me this on the way to the hotel.

"No, I'm an editor and a colorist..." I started, but Joe interrupted.

"She's an artist," he said gruffly, with a stern glance at me.

We all got to bed pretty late that night, and then the printer rep called us in the middle of the night. Tor was going on press in a few minutes—this was at about four in the morning. We trundled off into a van that took us to where the first sheets of Tor came off the press.

Joe was a trooper, not at all phased by the late hour. And the thing I've never forgotten is how he studied the first proofs off the press and then he looked up—and his face was absolutely lit up. He was like a kid, delighted with wonder at the first real printing of his work.

Even at four in the morning on no sleep after all those years of seeing his previous work printed.

Joe left us earlier today, at the age of 85. He leaves behind a large family including two famous artist sons that many of us know, having worked and socialized with them over the years, as well as hundreds of alumni and teachers from the Joe Kubert School.

Joe never stopped being creative and productive, and amazingly, DC still has one more project of his that he was working on. He worked up until the end and never faltered, never produced weak material. I am honored to have worked with Joe for that short time in the early nineties, and I know he'd have no patience for me procrastinating and putting off my next books. He's an inspiration—our best days are never behind us.

My hair colorist friend Paola is taking a class in a technique called "hair painting," so she asked me to come in early Friday morning and be her head-of-hair to work on.

I was a little worried partway through when I wondered if I'd end up looking like a tiger, but look, it worked out well. 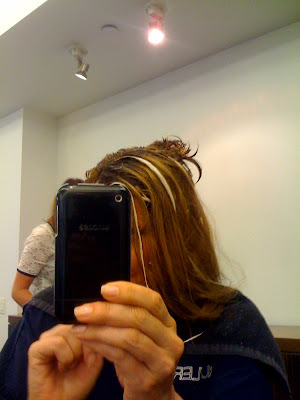 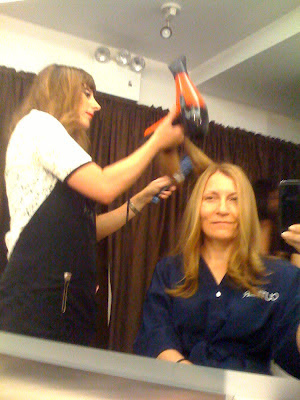 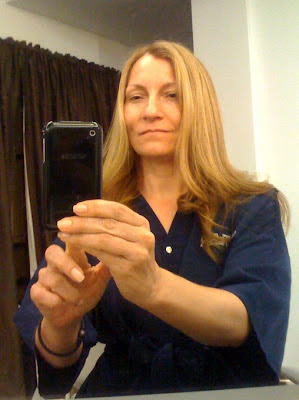 Posted by Marie Javins at 5:20 PM No comments:

But What's Behind the Paywall?

This entry from my site statistics concerns me. Really? Someone searched Google Pakistan for that term?

I imagine they were a bit disappointed. Or were they trying to figure out if I'm male or female?

Posted by Marie Javins at 7:40 AM No comments:

It's okay, I get five bucks a day for this. That won't affect my career as a freelancer, right? 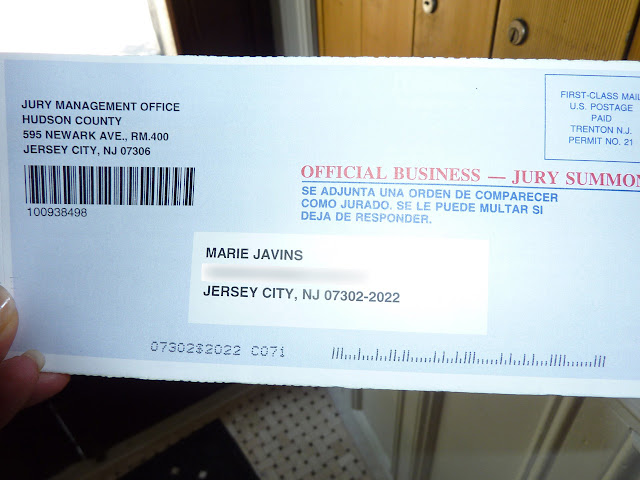 Posted by Marie Javins at 9:21 AM No comments:

Posted by Marie Javins at 8:46 AM No comments:

Is Geraldine Way Down the Block?

I knew Flip Wilson was born in JC, but I did know he'd been one of 18 kids, and I hadn't put together that Geraldine invented WYSIWYG.

"What you see is what you get!" 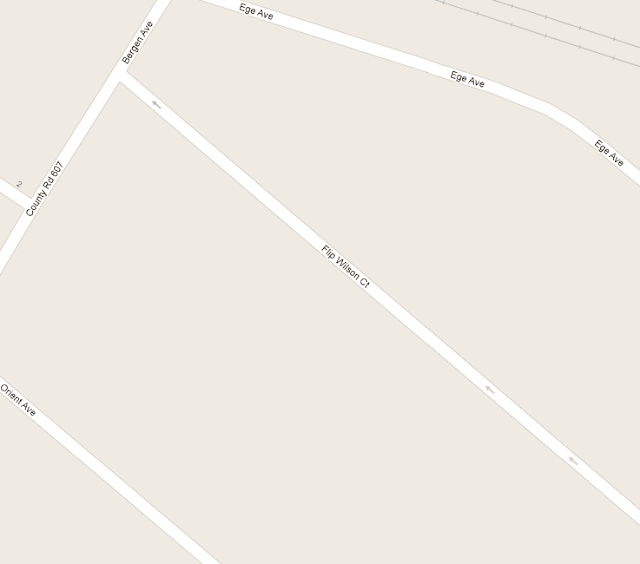 I stumbled over this today while sorting photos.

Yes, I used to live in Australia, just southwest of the Sunshine Coast. And one day, Turbo and I went for a drive to see this big pineapple. 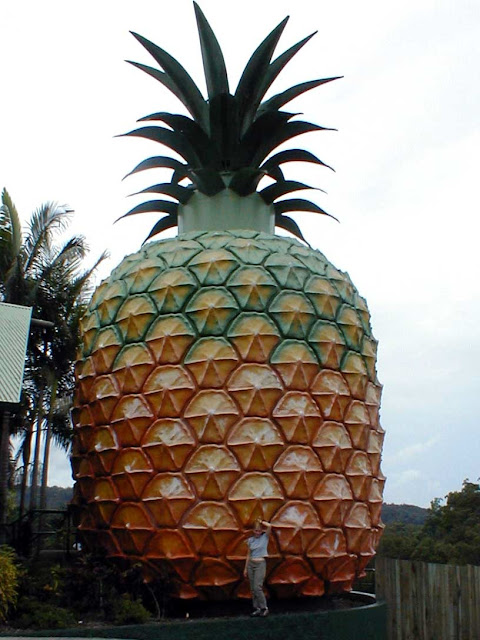 Posted by Marie Javins at 9:53 PM No comments: