When last we checked on my plumbing skills, I learned how to fix the guts of a toilet, and had gotten pretty good at pulling them up and putting them back in. And before that, I'd mastered the art of the purple stinky glue and the air admittance valve, but I've been letting my plumbing skills go a bit rusty.

Well, they are still rusty.

My new place had this set-up in the bathtub: 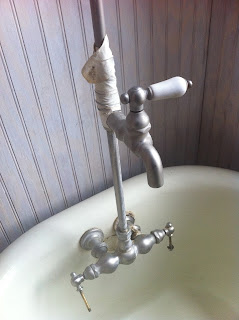 I tried showering here a few times, but it was annoying the way the water squirted out from the tape. And really, who does that? Who tapes up their plumbing?

I assumed this was because it was an 1895 fixture the age of the house, and parts were hard to come by.

Not so, it's a reproduction, according to the people at a speciality store in Manhattan. I took this photo in to George Taylor and asked for advice.

Once it was confirmed that this wasn't authentic, and the downstairs tenant confirmed the tape was a recent development (there had been a complicated tenant at one point, who hadn't paid rent and had, um, issues), I looked into it. 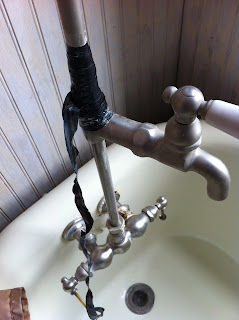 I took off the gauze and found electrical tape underneath.

I kept going and found a break. 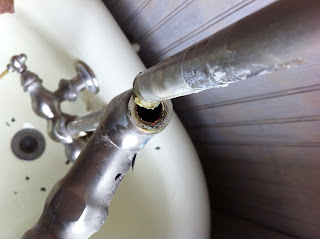 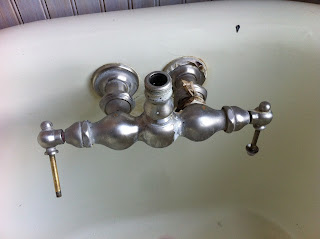 I pulled out the whole shower riser gizmo and put it in the back of Henry the Ford Taurus. He's made many visits to Modern Plumbing on Communipaw over the years, and this one was fairly successful.

The store proprietor put the pipe in a vise and pulled out the other end of the tap. Huh.

"You could try to get it rethreaded," he suggested.

I did try--but no one wants to rethread 3/8" pipe. They just like to rethread black pipe.

I don't have a lot of time and I still need handles and to deal with the tape on the faucet.

That sensible approach, I figured, was to buy a new reproduction get-up. And that's what I did. I feel like I failed a bit, and my Aussie ex would be disappointed in my easy fix (he would've figured something out), but at least the only tape present with be made of Teflon.
Posted by Marie Javins at 10:37 AM No comments:

Moving in a Rush

Between buying a house, vacating my apartment, and moving to Burbank, I’ve had my hands full.

My last day of the big work project was Monday. And though I don’t need to report to Burbank until 5/26, my friend Yancey needed to get some work on his/my apartment. I had to get out quickly so the floor refinishers could get started.

Initially, I booked them to start on Friday. But then I realized that meant a significant part of the work would happen on Monday, and I’d end up being out of the apartment longer than I wanted to be. I called back Alpine Floors and rescheduled them for Thursday, called Morrissey’s Moving and booked a move for Wednesday, and started packing.

I don’t have much stuff, but somehow, I still have way too much. I wasn’t ready and I had to leave some books, art, and all the kitchen stuff behind, stuffed in closets, the bathtub, the hallway, and in the refrigerator. But the movers got the majority of my furniture into my new house and all the books into my garage.

And now I find myself with a house that needs a scrubbing and a pressing need for replacement tub fixtures for a clawfoot tub from 1895.

There’s a lot going on in my corner of the world.
Posted by Marie Javins at 11:19 PM No comments:

I finally bought a house!* 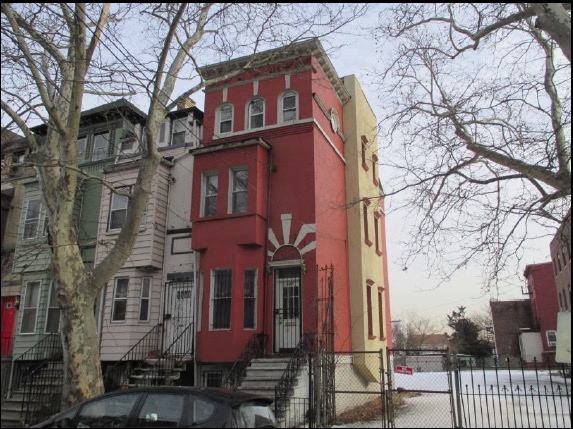 This was a long road. How many have I bid on and lost? There was the beautiful old Magnolia row house, Richie Havens' amazing house up in the Heights...both stunning and perfect, but unfortunately many other people seemed to agree with me. There was me chickening out on homes before that, the obvious great one being the $220k shack on my old block now on sale for $869k post-renovations, another being the murder-house two doors down from Havens', where a man had shot his girlfriend some years back. It finally went into foreclosure when he couldn't make the payments from jail. I'm not sure if it went up on the auction block or not in the end. I was keeping an eye on it for a long time until I gave up.

And there were the three I succeeded with, to a point. The leaking oil-tank house, which was amazing aside from the toxic soil. The fixer-upper on Pine Street, which I loved, but the bank didn't love it so much because it wouldn't appraise anywhere near what I perceive it to be worth. And finally, I got this house, a really good one on Lafayette Street.

The house I bought is great, but it has some drawbacks. Magnolia and Beacon were by the Journal Square PATH train, a tremendous benefit. Havens' house was by a trolley stop in Hoboken. And Pine Street by a trolley stop near Liberty State Park. That was the perfect confluence of bargain and accessibility, but no, I couldn't have it.

The Lafayette house is slightly less convenient, a half-mile walk to the trolley but only a half-block to the bus. Buses are easy enough but trains are more easily understood, easier to navigate, and not a problem when there's traffic. There aren't many restaurants at Lafayette, unlike the Journal Square homes I'd tried for.

But one thing Lafayette has going for it is it's a hop, skip, and a jump to the exploding gentrification of Grove Street, to the point where developers are all over the area. Two huge luxury condo projects are going on nearby, one in an old church and one in a former Catholic school. I'm fairly confident in the potential of a huge raise in value. But then, so were the previous owners, who bought at the height of the bubble and had to sell at a huge loss in the end. I can see that happening if there is a change in Manhattan's fortunes, which there is always that potential for a swinging pendulum to clock me up side the head, but probably not.

I first coveted this house in late 2005. It's the $420k one there, though the link doesn't work anymore. I'm not a fast mover when it comes to real estate, but in this case, that worked out as the final price was $285k now. I later started chasing it in August of 2013, from Mexico, when I saw an FSBO ad on Craigslist. I looked but balked at the price, which was much higher then.

My friend Roberta finally decided to buy it when it went up on Craigslist again recently, but when she tacked and started looking by JSQ, I went for it. 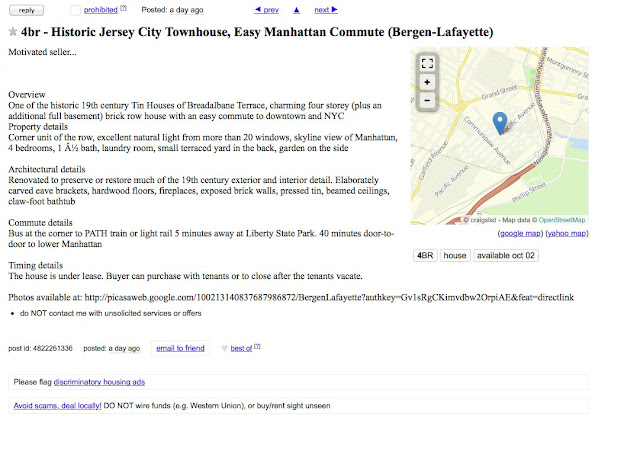 And now it's mine. Which is daunting as hell, but thrilling too. So, yeah, I have a house. Now what?

*Just in time to have to move to Burbank for a while for work, but that's another story.
Posted by Marie Javins at 11:29 AM 1 comment: