On my last day in San Miguel, I dropped off my laundry, then headed to the bus stop.

BOOM! A firecracker went off ten feet from me. I swore out loud. In English, but I don't think I fooled anyone.

I caught the bus and noticed as soon as I boarded that a man was playing guitar and singing off-key (and loudly) from the rear of the bus. Great. We headed up the hill to the Tuesday Market, stopping by the panoramic viewpoint to let a clown board. 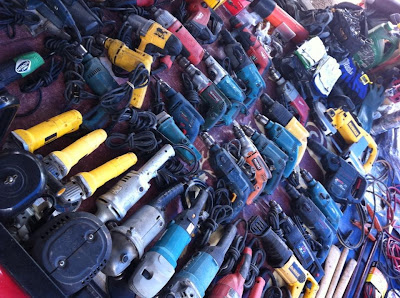 San Miguel was testing my devotion to her, here on my last day.

The Tuesday Market, you may recall, is a kind of magnificent outdoor dollar store. A massive flea market with lots of used stuff, cheap plastic crap, and food stands. I wanted to check out the Otomi embroidery. I'd eyeballed it in the shops in town and priced it from-the-source in the artisan's market, but I wanted to check the big market before I committed to buying.

But I spotted no embroidery. And by now, after having looked at these textiles, I wanted one.

I had to have one.

I was done with the Tuesday Market pretty quickly and caught the bus back to town. I got off right before, at the same viewpoint where the clown had gotten on. 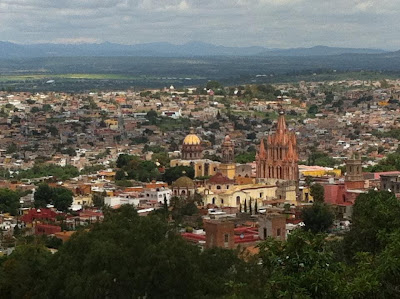 I walked the rest of the way, got something woefully inadequate for a meal (remember I'm still on sugar-free/bread-free/pasta-free/fruit-free), and then headed to the market to buy the embroidery I wanted.

I really didn't mind paying full price. At 2,300 pesos, a large hand-embroidered textile was a bargain. But when I asked the grandpa who had sewn it along with his wife, "Which one do you like best," he thought I was negotiating and lowered the price to 2,000. I tried several times to get the price back up, but he wouldn't hear of it.

He grabbed an interpreter and then voted. Then his grandchildren, son, and the interpreter voted. Majority ruled, and so I bought the one they told me to buy.

Plus, it has donkeys and mice on it. How could I not buy it?

Of course, now I get to carry it. 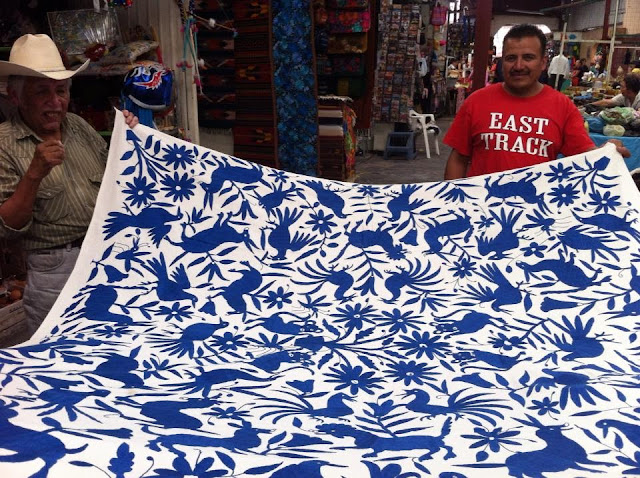 Oooh, those tools would look good in your truck. Don in AL

Sand In My Suitcase said...

Delightful post on how not to bargain :-). But you got your Otomi textile for less anyway - and you made grandpa happy :-).