Why did no one tell me there was a book about knights riding giant dalmatians? 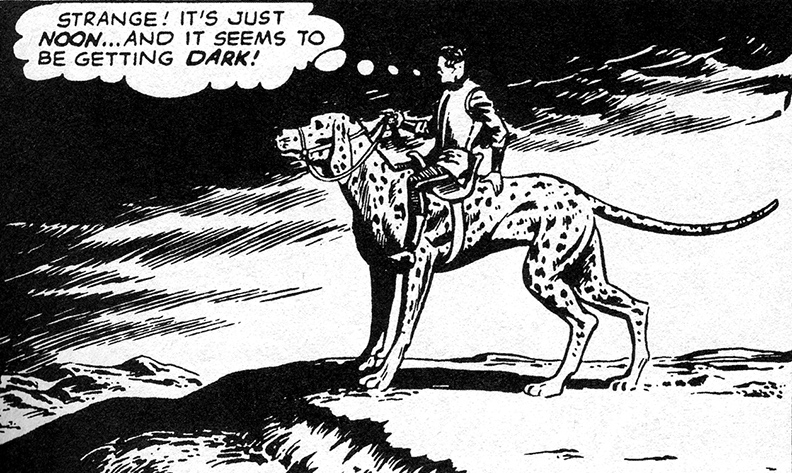 Plus, the same book starts with the tidbit that there is an emperor of Weehawken.

Look what I made in pottery class last night! 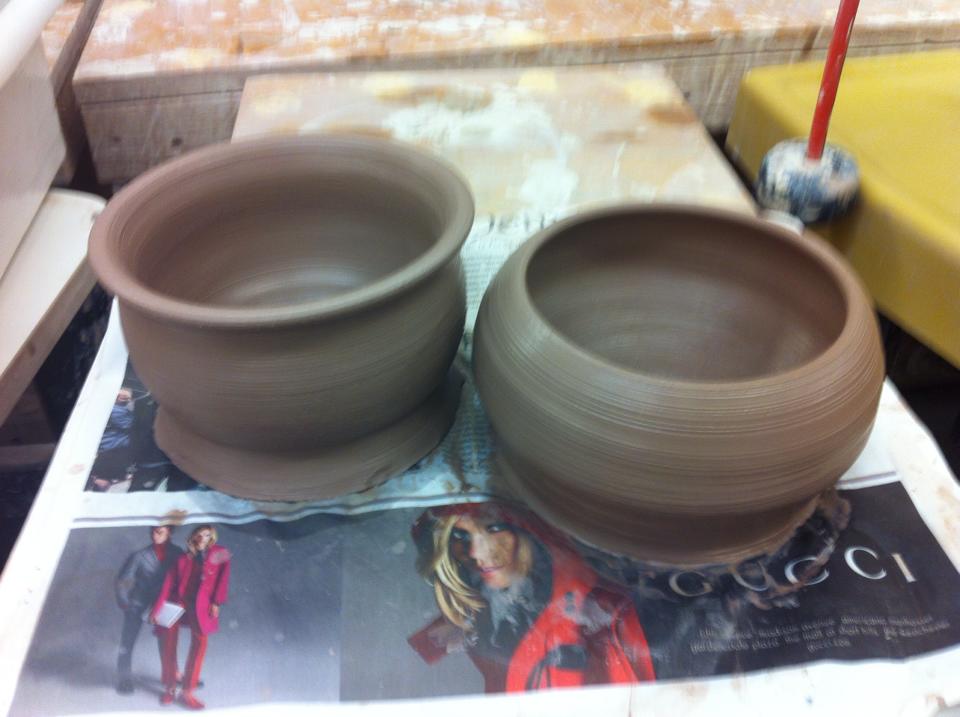 You have no idea how surprising this is to me. I suck at pottery. I can't even center right. But I have a temporary day job for a while, and I knew going in how jobs can take over your life if you aren't careful, so I signed up for something to make me leave work once in a while. At least on Thursday evenings.

Last week, I managed to center, but the best I could do was two cylinders. This time I made things I might actually end up firing.

Of course, I could still destroy them in the trimming stage.
Posted by Marie Javins at 7:43 AM No comments:

Hooked On A Great-Looking Book (Ooga-chaka)

Every once in a while, for fleeting moments, I think I have the best jobs in the world.

My long-suffering editors got this to press yesterday. It's an amazing book. I can't wait to see it in print. 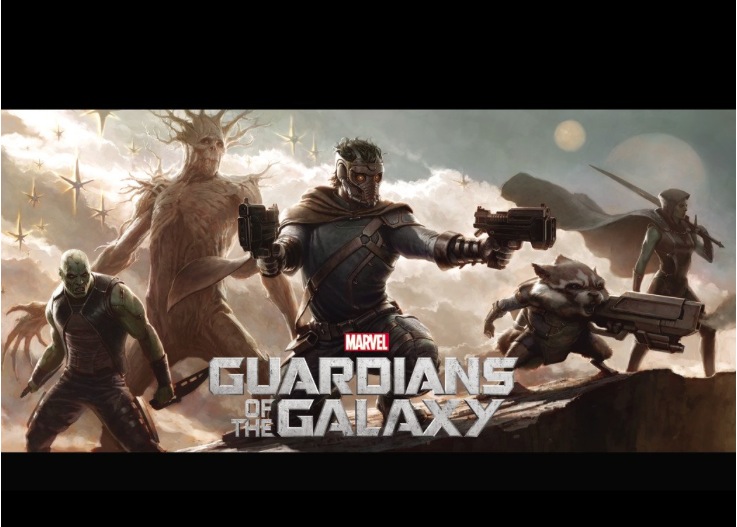 Posted by Marie Javins at 6:21 AM No comments:

I want to shower but this...this thing is in my bathtub. 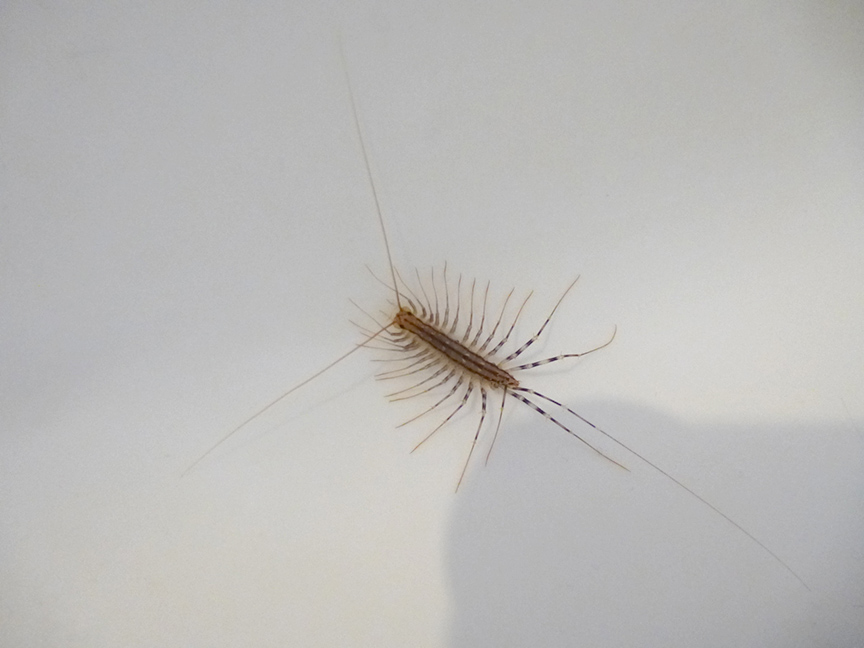 It freaks me out to listen to this. The voices are all different in my head, and they all sound like me. 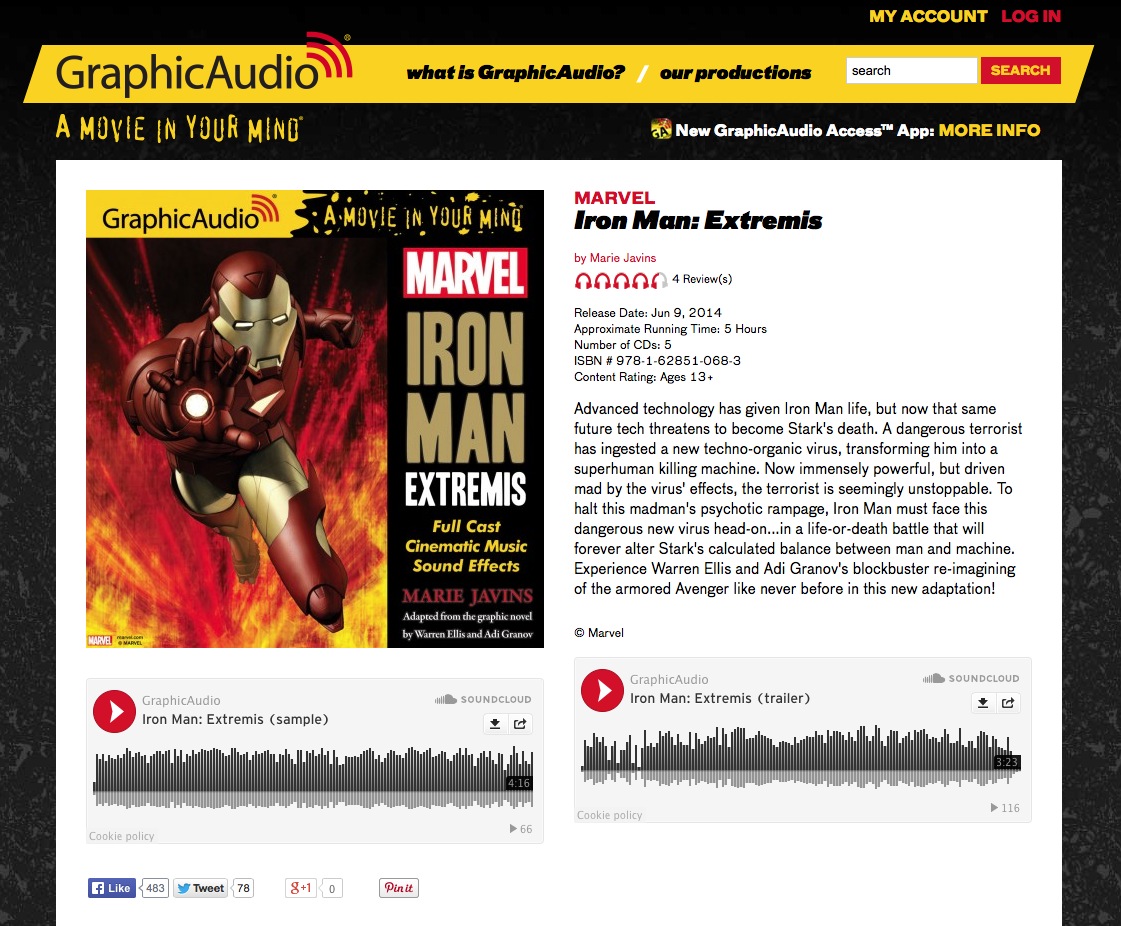 Posted by Marie Javins at 7:39 AM No comments:

Where do I get one of these? 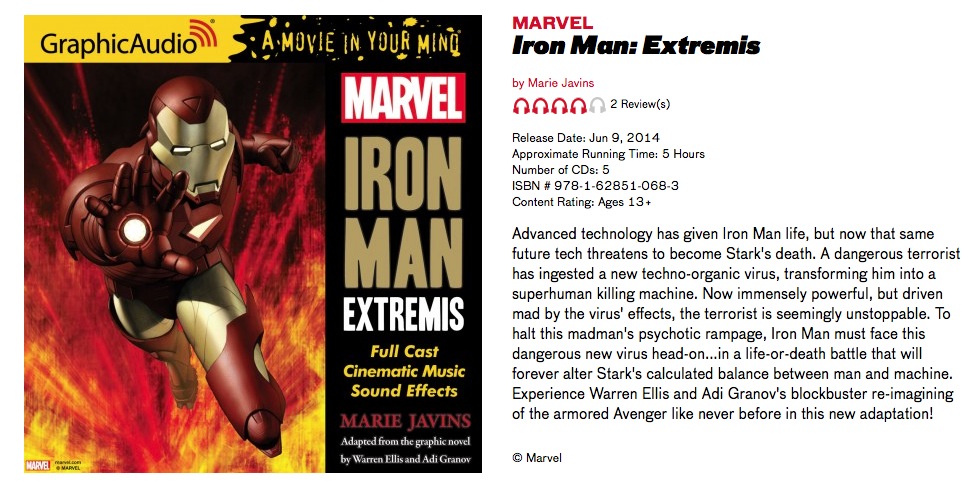 Posted by Marie Javins at 9:22 AM No comments: 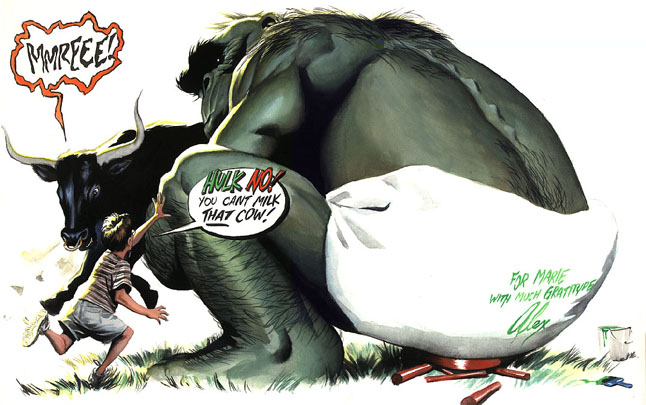 I pulled a portfolio out of the garage over the weekend. I had an idea that maybe there were original AKIRA prints in it from the early nineties. Kodansha had instructed me to destroy them. Surely I hadn't done that? It seems so unlike me.

But I guess I did. All I found in the portfolio was two desk calendars, one from 1990 and one from 1992, a signed Moebius print, and a stack of original artwork of cows.

I can sort of see 27-year-old Marie's thought process on the AKIRA prints. "I can't destroy all this beautiful art! And yet I must...if I don't, I will be tempted to scan it all in and post it on Facebook in twenty years."

The cows were an inspired gimmick that took on their own life and became something incredible. A few guys at Marvel drew some cows for me. Then a few more drew cows. Then all kinds of people, some of them quite famous, drew cows.

I had them all on my wall until I "quit" in 1995. But that turned out to be the lamest quit ever. I was back in the office as a consultant on speciality projects within six months, alternating with staying home and coloring X-books. That went on and off until 2001, when I declared myself done with comics forever, and went off to travel around the world by bus and ship for a year (live on the Internet, of course).

My "done with comics" thing lasted exactly long enough to learn there were actually some lower-paying gigs than comic-book freelancer, and one of those was travel writer. Yes, I wrote some books, but I also started coloring for Gemstone and Marvel. So much for my grand departure from the medium.

You don't choose comics. Comics choose you. Before too long, I was combining my interest in travel with my interest in comic books. I suppose I'm the only former X-Men colorist and Akira editor who has also been EIC/creative director of a company based in Kuwait and, at the time, Cairo.

The cows did not go along with me to Kuwait, Cairo, or around the world in 2001, or on the repeat loop that took place a decade later in 2011. They have been in the portfolio since 1995, the first time I vowed to leave comics. I've since since edited prose novels at Marvel, written one myself even, written five ART OF books for Marvel, taught comic book coloring for seven years at SVA, and run Botfriend with Stuart Moore, where we've packaged some great comic books, including EGOs from Image, with my former student Gus Storms.

But I hadn't gotten a new cow in years, not until yesterday when Kevin Kobasic scribbled one out and sent it over. I'll have to add it to the wall, which has existed digitally since I sat down to learn HTML in 1997.

Here it is, in all its HTML-in-its-nascency glory: the legendary Wall of Cows.
Posted by Marie Javins at 7:04 AM No comments:

And Still It Grows

I pulled a box labelled "red hard drive, iPhoto, 40 GB" out of my garage a few months ago. Forty GB? Let's move it out.

I got home, opened the box, and crap. Old-style Firewire.

No problem, I thought, I'll just hook up the 23" Apple monitor to my Air. It has the old Firewire outlets.

That's when I discovered the monitor had been powered by the eight-year-old computer I had at the office I'd closed down last year.

I eventually got around to picking up an adapter, and now I'm looking at a 23" Apple monitor as I type this, but for whatever reason, the little red drive that could, can't. 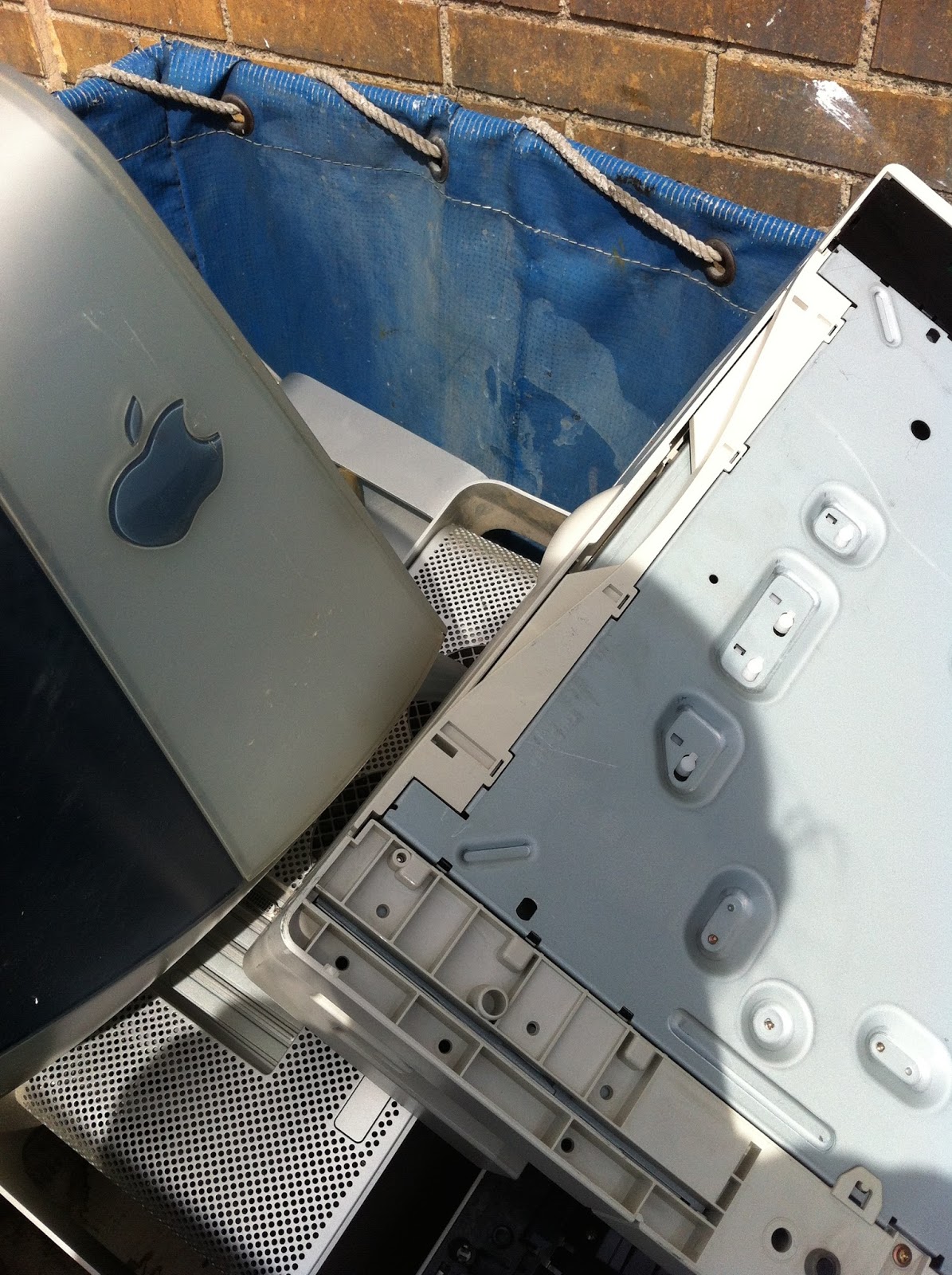 So I put it with the A/C adapter for the even older monitor an annoying man left at my apartment (because leaving ancient computer junk at someone's place is another way of saying you're an asshole). I'd ditched the monitor—which was satisfying because it had a nonsensical platitude on a bit of paper stuck to it, and a dead bug in a transparent leg—but I kept the adapter for the $100 I'll get for it on eBay at some point.

And since I'm cleaning my apartment today (my hair colorist is dropping by tomorrow night after my first day at my new short-term job), I picked up the old Airport station that was sitting in the living room, and added that to the pile. I'm not actually throwing away the red hard drive—yet. First I have to hit it with something and pry it open to get the hard drive out and empty it.

For someone who recently got rid of a lot of e-waste at the county landfill, I sure have a lot of obsolete electronic crap around my house.
Posted by Marie Javins at 3:52 PM No comments: