I Capture the Cat

I caught an orange cat.

He's in there, kept calm by the cover. 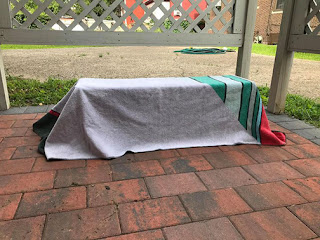 Posted by Marie Javins at 1:24 PM No comments:

I have a plan!

It’s to follow Tracy’s instructions and use a cat trap she’s bringing over to me tonight.

The trick is going to be catching the un-fixed orange cat rather than a skunk, raccoon, squirrel, or opossum. Or a different cat with a clipped ear. 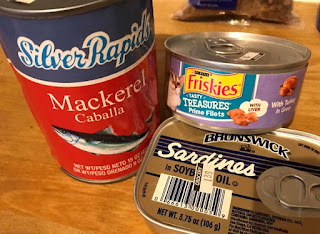 Posted by Marie Javins at 1:19 PM No comments:

I got a little drone. My idea is I can see when the gutters need to be cleaned out without going up on the roof (which is terrifying to me).

But I think I'm going to crash this drone before I figure out how to use it properly.

Yesterday, I saw a lot more of the convent next door than I meant to see.

Then just now, I bumped my drone into the house once and into some branches once, but I successfully used it to see there are only a few leaves in the gutter on the small roof.

Of course, I could see these things just by asking someone upstairs to look out the window. But I'm getting there.

Posted by Marie Javins at 8:30 PM No comments:

This morning, I didn't feel like pulling out the patio furniture since we're supposed to get thunderstorms later. So instead I opened the back door and sat just inside, an eye open for curious animals and carpenter bees, while indulging in a hot breakfast instead of my usual weekday fruit and yogurt.

I'm 24 hours away from the weekly Los Angeles weather and Covid review, when I get to decide if I'm ready to go back or extend yet another week.

The other coast is a great place to be from November to April/May, but right now it's been unruly. I thumb-typed the below text out a few weeks ago and just now went back to it. I'm not getting into the age-old battle of NYC vs. LA. I understand we're in this together and the real story is if you prefer urban or rural. But I do like a bit of weather.

I awoke at 3 to the loud rapping of hard rain on the downspout outside my window. The smell of wet and green permeated the fresh air. I’d only slept one night here with the windows closed and the a/c unit on.

The rhythmic sounds and smell of grass, leaves, and moss were glorious after so many months in a dry climate, one where sleeping with the windows open only results in a veneer of dust from the 134.

I lay awake until 7, then finally dressed and left my house. The rain had stopped and I could hear a cord banging against a flagpole, as well as the sound of distant air conditioners and the blaring warning that the street cleaners were en route to a nearby block. A graying old man in a beret whizzed down the sidewalk on an electric scooter. Cops were double-parked outside Martha’s, picking up breakfast. Martha's is one of our local Black-owned businesses. I headed around the corner to another, The Grind, the most perfect coffee shop run by another Hamilton Park transplant...it opened up in Bergen-Lafayette about six months after I bought the house.

The afternoon I moved in, there was a riot of high school girls and their mothers, fighting in front of my house. That day, the cops had not come to Lafayette Street looking for breakfast or coffee. And what I'd said to Michael Kraiger that day, when he was helping me move was "Oh no, not again." I grew up on a street where screaming matches and violence were fairly common. I knew the drill. Stay inside. Stay out of it. Don't let on you're the one that called the cops.

But that hadn't happened again. A one-off, perhaps a misunderstanding. All I have now is the sound of the street cleaners, the neighbors talking to each other, the cicadas buzzing, and sometimes, rain hitting the downspout outside my window.

Posted by Marie Javins at 12:28 PM No comments:

And every Saturday, I change my flight another week.

I like to go to the neighborhood pool in the morning, but today I needed to go to the post office, so I used a Citibike to cycle there along new bike lanes.

Now enjoying a bit of normalcy at Sam A.M. Paulus Hook. These moments are found treasure. I now relish what was typical of the previous rest of our lives. 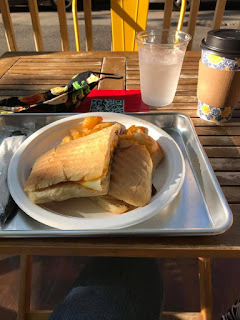 Posted by Marie Javins at 12:25 PM No comments:

I have to go back to Burbank one of these days.

It's perfectly comfortable there, though the virus rates are high in CA, and they've said it's so hot that electrical usage is off the charts and they're going to do rolling blackouts, like they did in Kampala when I lived there in 2005.

Meanwhile, the heat here broke and the weather is currently ideal.

My little studio in the bottom of my house has mini-everything. It's like living in an RV, down to sitting outside on the patio enjoying the breeze while eating and swatting mosquitos. I even have wildlife.

And the takeout food nearby is vastly superior to what's mostly local chains in Burbank. Plus I have a pool a few blocks away, plenty of Citibikes, and did I mention a bunch of friends to socially distance drink coffee with?

But I have a temporary bunch more responsibility at work. so I feel like I should be in the right time zone for availability, so I am probably going back. A bit concerned about the rolling blackouts though.

I'm going to end up sleeping on the balcony with the radishes, aren't I?

Posted by Marie Javins at 12:20 PM No comments:

I was a guest on Peter Moore's podcast! We had a good chat about border crossings. 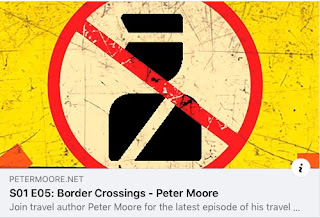 Posted by Marie Javins at 10:17 AM No comments:

Crap. I was sorta hoping I'd had it, not noticed, and had a kind of mutant healing factor. 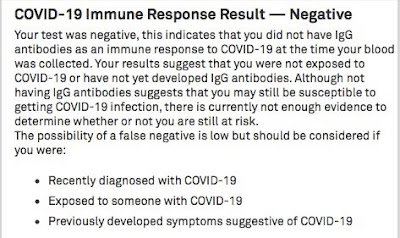 Posted by Marie Javins at 12:12 PM No comments:

Last time I went into my storage unit in Jersey City, back in 2019 before pandemic changed our lives, I discovered my scanner had somehow crashed to the concrete floor. Which was a bummer because it was an expensive scanner I'd bought for scanning negatives.

I picked it up and heard a lot of loose things shaking around. Not good.

Today I went to my storage unit and retrieved the scanner, thinking I might as well stop putting off the bad news. I unwrapped the scanner from the bubble wrap and plugged it in. It made scanner start-up noises, but when I tipped it, things were still shaking around.

I found a cord and connected the scanner to my laptop, pulled a photo out of one of the little albums on a shelf in my tiny apartment on the ground floor of my house, and...success!

Here is Steve and Catherine in 2001 on-board the Direct Kiwi freighter at Terminal Island, Long Beach Container Port south of Los Angeles. They'd driven me there to start my first grand trip around the world.

I was glad my scanner worked, because my original scans were all crap, sized small because the internet was young and websites had to load up quickly with just a few MB of content.

Unfortunately, the scanner only worked once. I'll need to get a new one eventually. 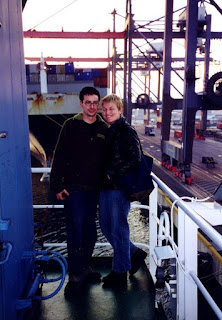 Posted by Marie Javins at 12:14 PM No comments:

My internet came back on around 9 pm.

It was kind of fun finding candles in the backs of drawers, cleaning branches off the sidewalks, tethering my laptop to my phone, and loading the fridge with deli ice.

Ultimately, no harm done. The roof performed like a champ. Meaning nothing flew off the house this time around.

Posted by Marie Javins at 10:09 PM No comments:

Raccoons are hereby evicted for the duration of this no power thing. 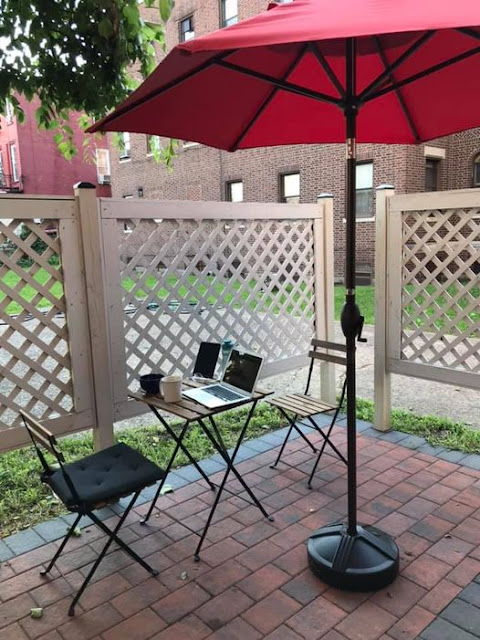 Posted by Marie Javins at 12:05 PM No comments:

Today was quite the adventure! Sitting on the stoop now for the cell signal. I have candles and ice. That’s enough for the moment. Good thing the roof is new. 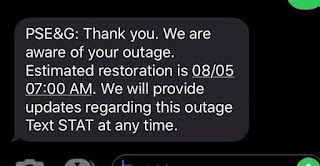 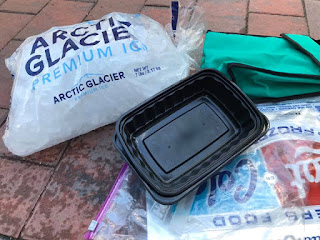 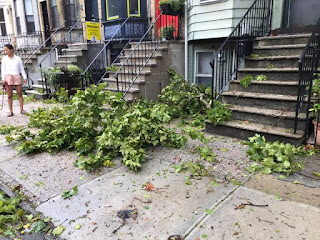 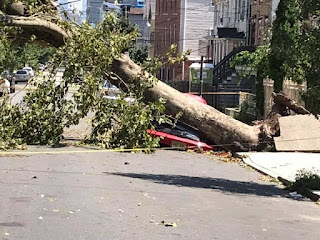 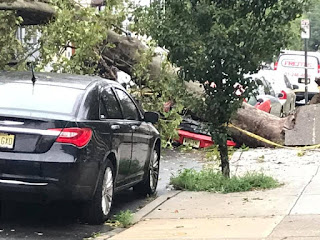 Oh joy. Guess who is super-prepared?

In Burbank. Not so much in Jersey City.

We've taken outside stuff inside (like plants and raccoon watering bowls). Swept up loose debris, pulled valuables out of the basement.

The wind is picking up. I wish I'd gotten around to buying sand bags.

Good news, if I have to clean up a moldy basement, I have masks and gloves.

Ready as we'll ever be, I guess. 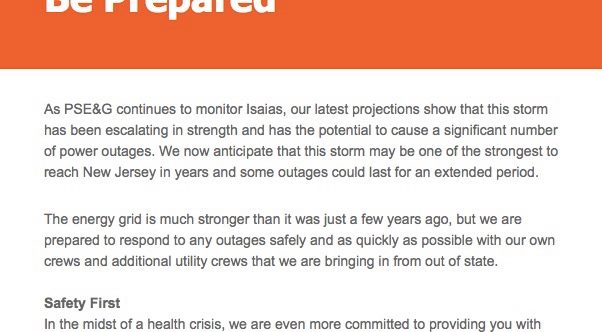 Posted by Marie Javins at 11:59 AM No comments:

The humidity is thick and exhausting to wade through, the air pregnant and overdue a thunderstorm, like the swampy weather I remember from the summers of my youth in Alexandria, Virginia. Air conditioning was something you went to the movies for, or to the video arcade at the mall, or maybe to the Smithsonian if you were broke and could only afford metro fare. In those days, everyone sat on their stoops and sweltered, or sat in front of a fan by the window. Evenings were about lightning bugs, watermelon, and throwing shoes in the air to watch bats swoop down at them.
Now I drink iced coffee and pant in front of the window a/c, but sometimes, I still sit on the stoop. In a mask of course, and I leave the bats and fireflies alone.
Posted by Marie Javins at 11:50 AM No comments: 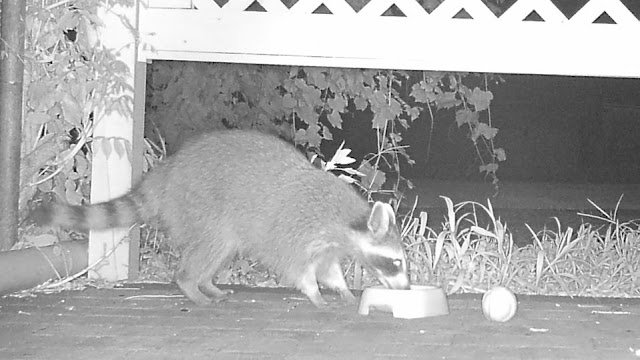 Posted by Marie Javins at 10:56 AM No comments: