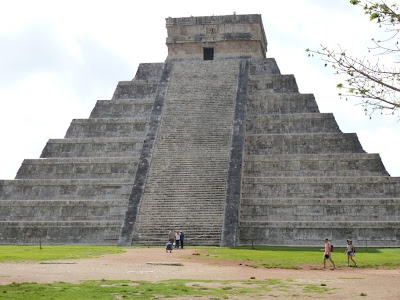 As I walked along the shaded entry path into the central courtyard of Chichen Itza, the vendors were setting up along the perimeter of the walkway, across all the spokes around the core of the site. They left me alone this early. No time to sell right now, they seemed to say. They were setting up for the big fish coming in later in the day, the hordes of tour buses from Cancun.

The main shebang, El Castillo, revealed itself as I walked. You can't climb it or go in it and I think that's exactly how it should be. I was a little shocked at how we could climb all over the pyramids in Mexico City. I thought about how it's cool that El Castillo is a calendar, but it's easier to just have one on your phone. At least easier to carry.

I continued on to the ball court, where the acoustics really are amazing. But I still couldn't hear what the two souvenir sellers in the corner were talking about. 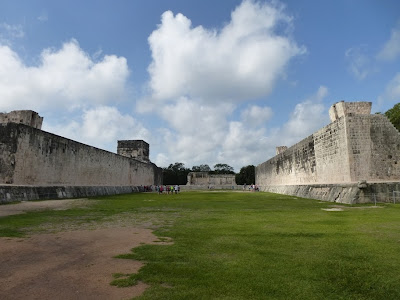 As the sun started beating down, I used my umbrella as shade.

Here are photos I took at Chichen Itza.

As the morning turned into the afternoon, the site became packed. So many people. I was glad to have gotten here early.

I left and went to the luggage storage area to pick up my bag. I had booked a hotel by the side entrance to the ruins, and now I realized I couldn't walk to it with my luggage. When I have gone around the world, I've carried backpacks, and that would have done the trick here over the dirt and rock paths. But the wheelie bag I was using since I'd mostly been going on a plane to one place wasn't going to cut it.

"How do I get to the hotels?" A police man said "Taxi." But the taxis were twice what they should have been been, so I balked.

"How do I get to the hotels without a taxi," I now asked.

"Collectivo." He waved me to the bus stop.

I waited a while but only large buses came by en route to large cities. I realized I should have only stopped a few hours then gone on to Cancun, as now I'd be captive in my hotel for the afternoon.

Could I have taken the regular bus to the hotel one? Maybe. It wasn't clear. But finally, I forked over the official tourist price for the taxi, and checked into the hotel right before the afternoon rains kicked in. 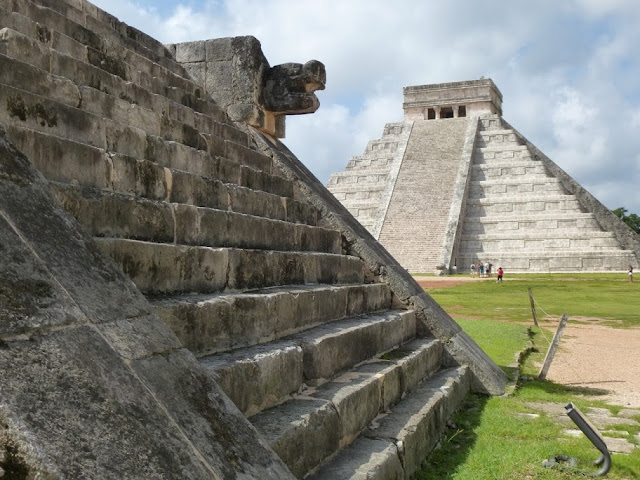