We all know I like planning, and the more impossible the task, the more fun I have figuring out ways around it. So give me a mission like renovating an old kitchen in Jersey City and I'm stupidly happy, even more pleased when I find out the new IKEA line doesn't have all the sizes I need.

Hallelujah! Something aggravating and impossible!

My contractor might be less delighted, I know, but I think at least he finds me a little funny. Though I'm not sure how long the tolerance will last. I find he usually lets me waffle a while then finally interrupts with "Just let me do it," and off he goes whether I'm done thinking or not. (This is a good quality in a contractor. I am not complaining.)

One thing I learned from Turbo the Aussie (the ex who approached every problem from learning to make my morning coffee at a campsite to building a house on a mountain with the same curiosity and can-do attitude) is to study the problem first. Go to Home Depot. Study the solutions. Go back to the problem and study it some more. Google. Eventually, you get there. That's how I've already screwed up twice in theory and had to get a new plan. Best to screw up on paper.

Initially, I thought I'd just leave the kitchen alone for a while. I certainly am spending enough money on heating, laundry, windows, painting, locks, and the bathtub. But then I realized I was avoiding using the kitchen on my trips home, because it's disgusting.

That's when I realized new cabinets would be a good thing.

They look fine in the photo below, aside from the garish gold knobs. It's when you open the base cabinets to find the warped particleboard that it's really a drag.

So I'm getting all new lower cabinets, new appliances, and new doors for the top cabinets. Or maybe entirely new top cabinets, depending on the condition of the existing ones. I visited a custom IKEA door shop yesterday, which is such a great idea, but the shipping costs had me taking a closer look at Grimslov.

The only thing I haven't worked out yet is what to do about the ugly wall tile. Any ideas? I'd like white subway tile, but I'm not sure I like all the dust that comes with removing the tile currently on the wall. 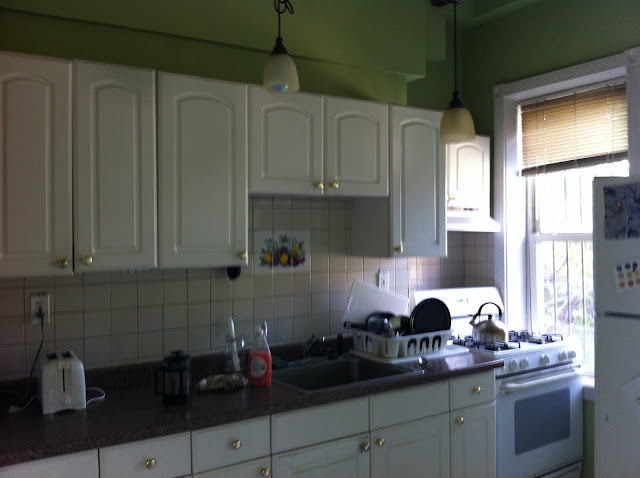 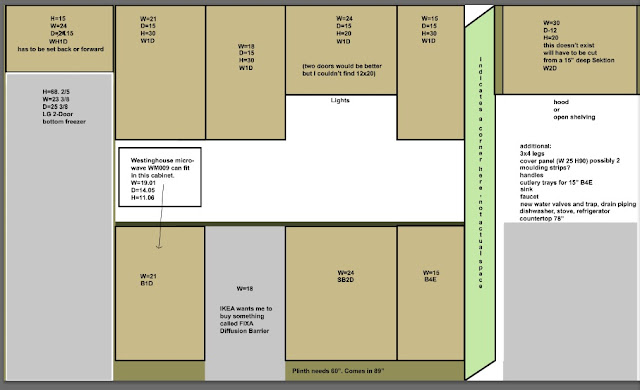 It's so hard for me to sit still on weekends, though I have a ton of stuff to do.

Like choose a refrigerator for my house in Jersey City. Read an outline for work. Find an apartment here in LA/Burbank.

But like most people, I'm excessively curious. I have to walk around and investigate my surroundings.

Yesterday, I went on a walking tour of Union Station with the LA Conservancy. It was great! Look, it's not Grand Central with its secret FDR car and dizziness-inducing glass catwalks, but it's still a great look at a snapshot in time, with its Mission/Art Deco architectural style and it being the end of the line of a grand journey across the country.

I did that journey myself in 2001, from Penn Station to Chicago, then switching to the Southwest Chief for the cross-country Amtrak trip. I loved it. I'd do it again in a second if I had the time.

Here are some photos from yesterday's trip. 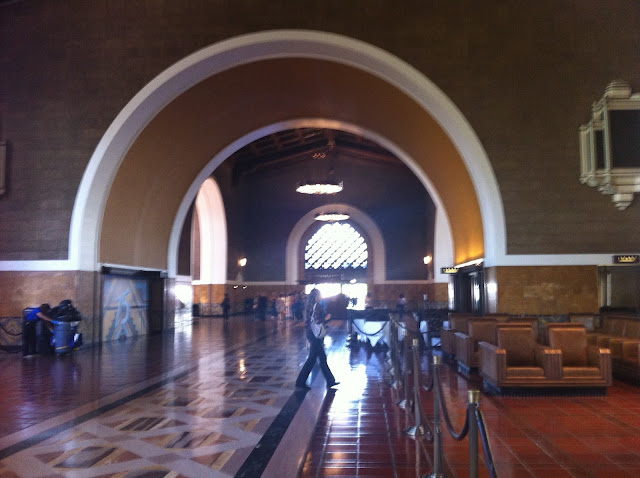 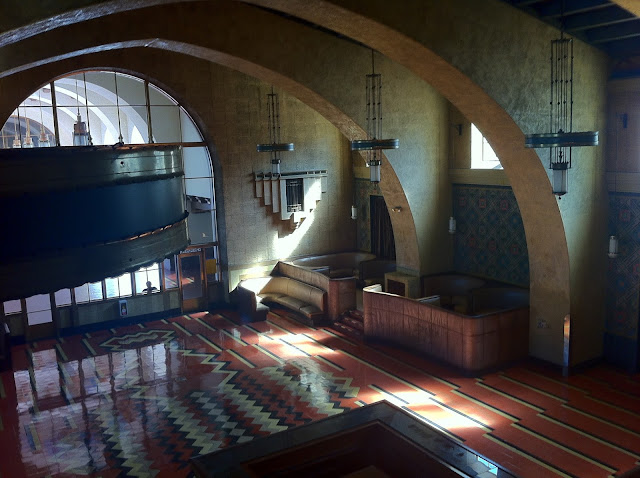 Posted by Marie Javins at 1:32 PM No comments:

Categories: Procrastination, Travels with Myself, West for Work

I bought four tickets today to send Syrian refugees from Budapest to Austria. It was really easy, especially since my laptop had stored my username and password from when I was in Budapest a year-and-a-half ago.

The tickets are only $11 each.

There are other direct ways to help, detailed here. Give it a try.

My friend Zora was just on the Greek island of Mytilene (Lesbos), and she reports back from there on ways to help refugees traversing this area.

You not only help refugees, you help yourself feel like useless in the face of a humanitarian crisis.
Posted by Marie Javins at 2:38 PM No comments:

My house is really coming along, thanks to the efforts of Michael Kraiger (who is painting and coordinating), Jim (who does carpentry, kitchens, and rabid-animal soothing), and a great master plumber named Chris at Royal Heating and Cooling.

I think I've convinced Jim to let me hire him to do the kitchen. That probably sounds kooky, but I had to come up with a way that didn't cost me an arm and a leg or he would stop me. No problem--I have experience in cheap kitchens. Hopefully this time I won't get drenched in gray water. Last time, Al H (my friend from college who is a contractor in Brooklyn and Manhattan) was doing something to one end of a pipe we were moving while my job was to hold the other end and get covered in skanky water. That was fun.

I'm in love with my little house. But I laugh at myself too. I'm so stuck on old and slightly broken things. I guess that's a good thing as everyone I know is aging. 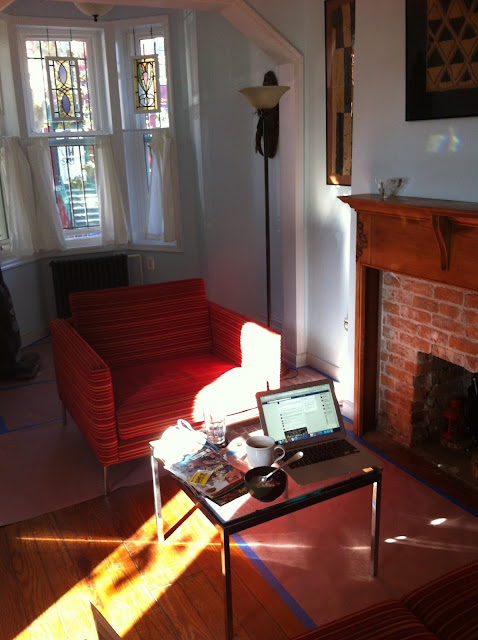 Posted by Marie Javins at 9:38 AM No comments:

Home Is Swallowing Me Up

I'm home in JC for the long weekend, and it's spectacular. The cafe owner wanted to know what I think of the West Coast (I didn't even tell him I went there--word travels fast). My contractor friend is willing to put up with me a bit longer to do my kitchen. The little room at the top of my house (it's small but comes with a distant view of Manhattan) is almost done and I can make it all my own. My storage unit is surprisingly organized and things make sense in it (shocking), and my car is running smoothly. I've seen some friends—not all of them, of course—and am off to see my hair colorist today.

On Thursday night, Denise and I went to dinner at GP's, where we sat outside on Hamilton Park on a perfect summer night. She walked me over to my car, where I promptly fell in this hole. With my good foot. 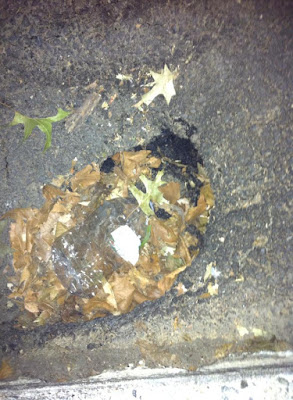 Once we determined that nothing was broken aside from my pedicure, we laughed and laughed. I really need to start paying more attention to my feet.

Posted by Marie Javins at 7:51 AM No comments:

It's been ten years, since that lonely day you left me...

That's a lyric from a Jason and the (Nashville) Scorchers line, from back when I cared a great deal about music, in my teens and twenties.

It continues to where the singer shoots his lover, and that has of course nothing to do with me, but that and the last line of the song runs through my head when I hear about the hurricane that hit New Orleans ten years ago. 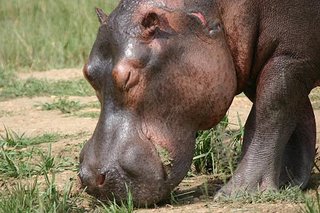 That's the day Herr Marlboro came tearing into my apartment on the Ggaba Road, back from running errands in Kampala. "Did you hear about New Orleans?" He went straight to the television and put on BBC or CNN (I forget which we got there).

It's also the last vivid memory I have of when things were going well for us. Right after that, his family came to town from Bavaria. We all went to a dinner at an outdoor garden in an Italian restaurant, where I ate something that made me terribly ill. They left in the morning, before I got so sick. He took them off to Murchison Falls while I stayed in Kampala, going to doctors when I wasn't lying on the sofa watching repetitive coverage of Katrina. This is covered in the first chapter of Stalking the Wild Dik-Dik.

Everything went off the rails shortly after, and then we were chased by a hippo. I ended up leaving, getting far, far away in a hurry, and I got very ill in Swakopmund, Namibia.

You can read all about September of 2005 early in this blog. You have to read between the lines a bit, because my book about this time hasn't been written yet. I don't know that it ever will be. I'd like to write it, but it's hard to find the time. I used to not write it because it was hard to revisit. Now I can revisit it without upsetting myself, but time is at a premium.

Everything changed for me in September of 2005, and that's okay. People do change, you know. But I migrated into a zone of a long state of depression, which only responsibility for a dozen employees in Cairo was able to pull me out of, a few years later. What really changed from this time is my outlook, and my inability to trust others. I do sort of, sometimes, I guess, but essentially, at some point in handling all this myself, I become my own mini-kitchen, a self-sufficient package of competency. It's morphed into a zone of familiarity and comfort. It's fine. I know other people have different ways of living, usually involving their own definitions of fun and happiness. This is what works for me, and I don't fight it anymore. It's kind of great, in its own way.