Palenque to Chichen Itza by Bus 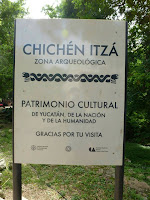 Oh, crap. The overnight bus from Palenque to Merida was full. And I was so disappointed. The first class buses I'd been in back in Guanajuato state had been bright and shiny new coaches with leg rests and free water and those folding wings for your head and neck. They'd have fancy men's AND women's rooms. And wifi. But this? This wasn't first class. These ADO buses were...well, essentially Greyhound.

Good thing I'd purchased my ticket ahead of time, at least. I'd tried repeatedly online, first in Safari, then in Firefox, first with Visa, then with Mastercard...it couldn't be done on a foreign card on the ADO site, though Primera Plus had a great online system. I finally called, and never got past the phone tree. Exasperated, I'd marched up to the ADO counter in Mexico City before heading to the pyramids. They'd sold me a ticket for later in the week.

A tiny woman sat next to me, which was a plus. But when two seats ended up open across from us, I scooted over. No one sat next to me all night, and I only woke up a few times. Plus, I got to watch Frankenweenie in Spanish. Fortunately, it was pretty easy to figure out the story without having a clue what any of the characters were saying.

My luck ran out when the third Pirates of the Caribbean came on. I doubt that made sense in any language. I'd missed it by a few days in Bangkok back when it had come out. That now seemed like a good thing.

The bus pulled into Merida around five. Five on a Sunday morning. I pulled my bag into the terminal and stood perplexed. Now what? I had hours before the town woke up.

So I walked up to the ADO counter and bought a ticket on the next bus to Chichen Itza, which was only about an hour and a half away. I'll have to visit Merida some other time.

When the ADO bus left me in the parking lot at the Chichen Itza main gate, I was a little surprised no one else was there. But then, it wasn't quite 9 AM.

Okay, not no one. Workers were setting up. I put my bag into the free luggage storage and bought my entry ticket. It's a ticket in two parts and not cheap. Maybe part is for the site and part is for the ruins? I wasn't sure.

I headed to that restaurant on the end for breakfast. Because one thing all these years of travel have taught me is to always maintain a regular eating and coffee schedule. And drink water. Even if you eat nuts and Nescafe, even if you are reduced to the worst fast-food burger in your memory, eat.

I also charged my phone while I ate. In case I ran out of camera power on my Lumix. I'd used both all day yesterday at Yaxchilan and Palenque.

Finally, after breakfast, it was time to get in and have a look around before the masses poured into Chichen Itza.