On Safari in Jersey City 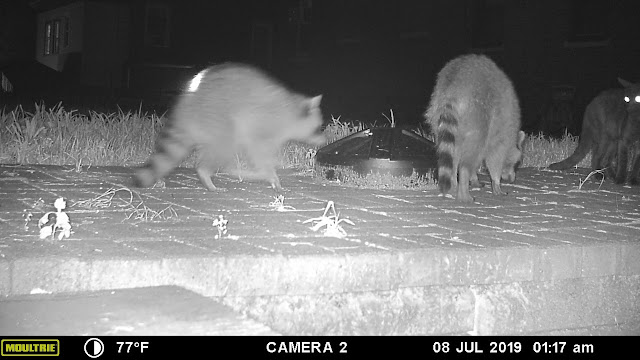 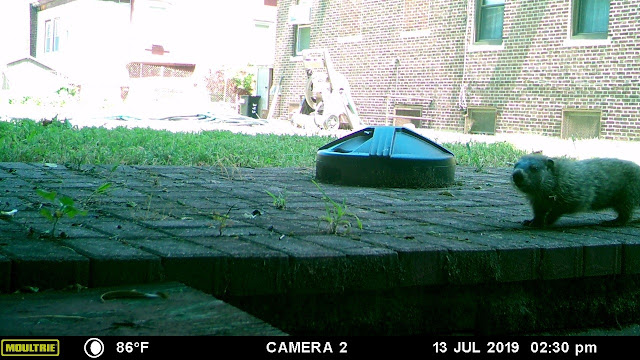 I’m flying out of LAX tonight and it’s possible I’m going to miss my plane.

Right when I was leaving the office, some people decided they had to talk about a very important issue, so I was running late. I ended up grabbing a Lyft to Van Nuys Flyaway because I thought it would be the fastest way. (Normally I get the Red Line to the Hollywood or Union Station Flyaway.)

Well, that was a big mistake. The wait for the Lyft was annoying, the traffic was horrendous, and the bus left 20 minutes late.

Note to self: Always opt for the train during rush hour.

So I was looking up how to walk from Terminal 1 to Terminal 7 in case I have to jump off the bus and run while it makes its loop around, and hey, something amusing came out of this irritating night. 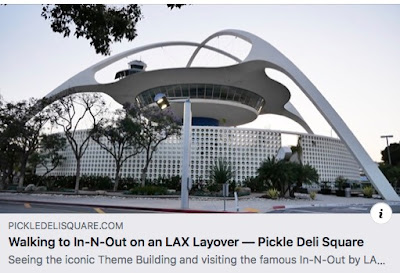 How about those socks I'm wearing! 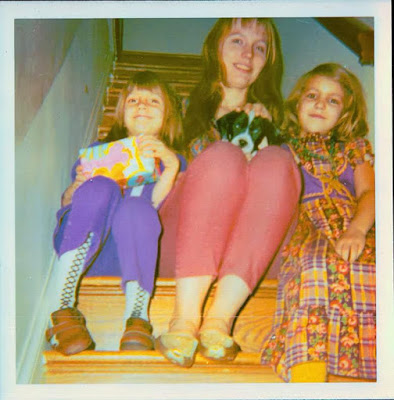 Eight months and 24 days after learning the hatch in the JC basement was super-leaky, it's blocked up! I tried hiring a landscape designer to deal with my backyard, but the only person who bothered to give me an estimate was crazy-expensive, so I put some laser-focused google-power to work and located the builder that company works with.

He was quite reasonable. Also, awesome.

Next step is to get the staircase and concrete out and fill it with dirt, drainage, and gravel. Actually, it's unclear what the next step is, but I'm hoping to find out soon. 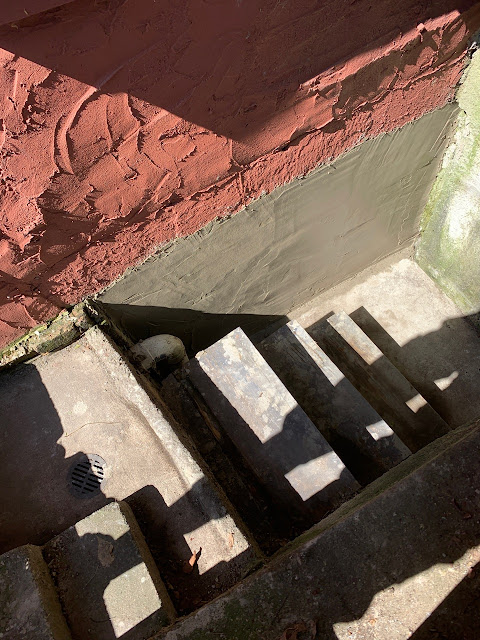 In 1969, a bunch of cool old Victorians were picked up and moved somewhere safe from real estate development.

I went there over the weekend, needing to get out of the house.

The living homes of Carroll Avenue in Echo Park are more exciting, but these are cool too.
Here are some photos. 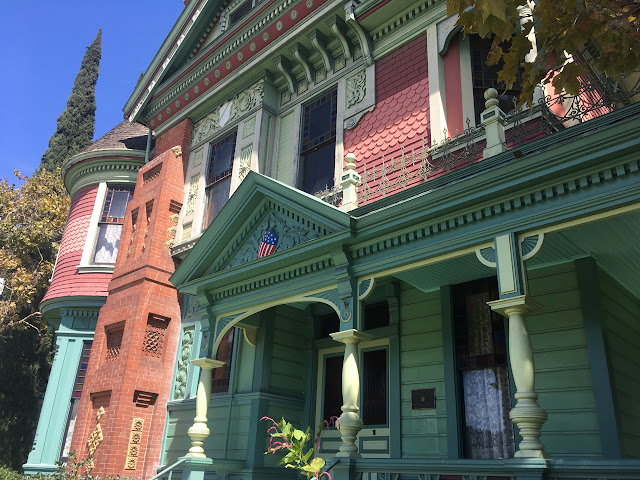 Categories: Procrastination, Travels with Myself, West for Work

Snagglepuss, the stage adaptation, was nominated for a Harvey Award!

Where Have We Heard This Before?

This former New Yorker drew a circle around his new office in the map, and tried living in different parts of LA via AirBnB within that circle. He also takes public transit.

I can hear my aunt saying it now. “I told you to write an article.”

Of course, writing an article is easier when you already work at a newspaper. Perhaps my story needs to be told as a comic.

Look what Rev Cool, a radio host in southwestern Ohio, uncovered when cleaning out his barn.

It's a poster from a seminal event of my college years. I was at a DIY conference of radio hosts at Rev Cool's house, with the other "new music" (or whatever we called ourselves then) hosts from WYSO community radio. Me, Rev Cool, Marty Lou, Chuck, Dennis, I think.

"Do you think Antioch would book the Dead Kennedys?" 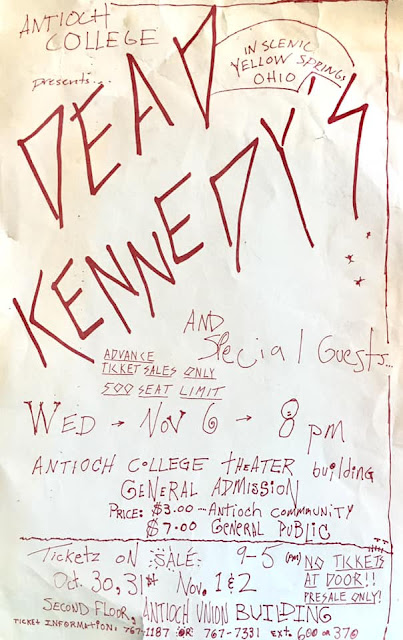 I returned my Yosemite rental car before work yesterday, then at the end of the work day, walked outside my Burbank office building to catch the bus to the metro to Vermont/Sunset, where I hopped on a DASH bus up to the Greek. I had a ticket to see Blondie and Elvis Costello.

This kind of event is so easy here in LA, if you can work around the parking costs and the traffic into Griffith Park. The outdoor amphitheaters are huge, so you can always get a ticket. The settings are pleasant, enjoyable even if you're watching nothing. I wouldn't think to buy tickets to much of anything if I had to get myself uptown to the Beacon back home—I'm more a small event or more likely no-mainstream events-at-all person—but here events are more appealing due to the settings.

So I went to the Greek on the bus and watched Blondie and I thought about disco.

Disco was happening during my childhood. Donna Summer was the soundtrack to the 1970s, along with the Fifth of Beethoven, Play That Funky Music (White Boy), Gloria Gaynor, and as kids, we all tried to do the Hustle. Or something. I don't know if it was really the Hustle. But there were dances people would try to do, and I was certainly not great at them.

I was sitting in a cafe at the center of Yosemite National Park on Saturday (one of only a few spots where the outside world can intrude via wifi or cellular), when I learned an announcement about my promotion was going to show up on a website this week.

Which is odd since my promotion happened nine months ago. I was puzzled but ambivalent. Okay, sure.

But what I wasn't prepared for was the onslaught of congratulations! Which is awesome, but awkward, given the nine months in-between.

I practiced grace for several days. I sometimes succeeded.

Here are photos of my short trip to Yosemite.

I really need to do this kind of thing more often while I'm living here in California. 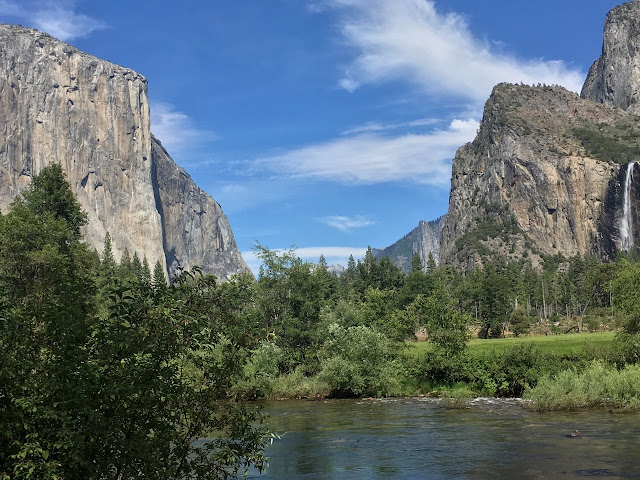 It wasn't pocket lint after all.

Give Me A Tent and a Patch of Ground

Looks fine, except the neighbors are traveling in a pack and blaring music through a tinny Bluetooth speaker. 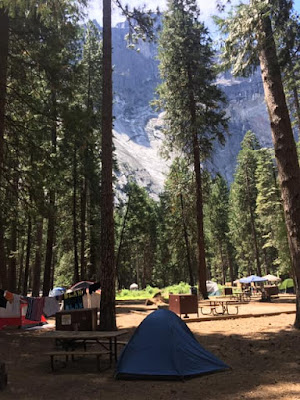 Here are some photos of Yosemite Valley from Glacier Point. 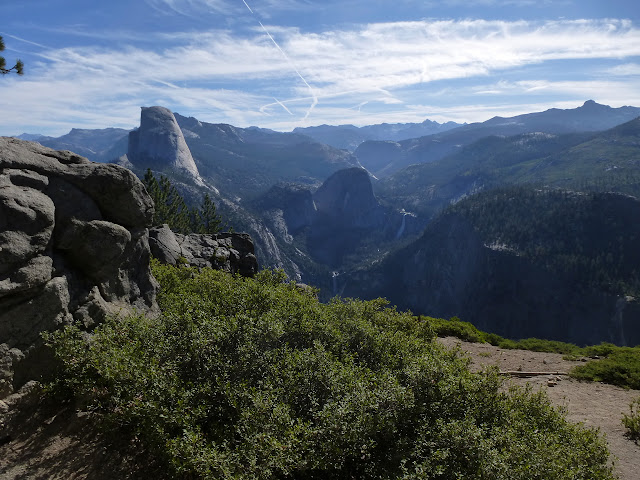 I awoke early—well, that's probably an exaggeration. I managed to leave the lodge at the outskirts of Yosemite before 9 in the morning. That's early enough, but hardly worth mentioning.

I drove to Glacier Point, a nearby outlook to get a glimpse of the Yosemite Valley I'd be arriving in soon.

And then I drove back, slowly down the winding road to the main drive. And then I saw a crowd of people and cars, and I pulled over. 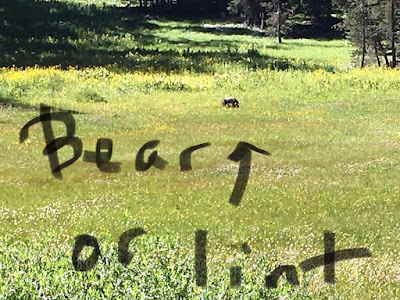 Back on March 15, I'd been hovering over my keyboard at 7 a.m. As immortalized on Sunset.com, I was signed in on Recreation.gov, waiting for Yosemite campsite reservations to open up.

I barely grabbed one and they were all gone for July 15-Aug 15 within a minute. I couldn't even get the same one for two consecutive nights, so I took a site for Saturday and reserved a still rare but less competitive single room with shared bath at a park entrance lodge for Friday night.

"That actually works out better," I thought. "In case I get held up in traffic out of LA and arrive late."

And here I was, five months later, cursing the slow traffic out of Los Angeles County. I'd meant to leave work at one, which is the earliest we can leave on summer Fridays, and I'd managed to get out just ten minutes late. But then I had to stop by my place to grab my blue IKEA bag of tent, sleeping bag, travel pillow, towel, and 19-year-old Thermarest. I shoved a few clothes in a knapsack, grabbed a water bottle, the old phone I use as an iPod, and was finally on the road by 2.

Traffic crawled from Burbank to Bakersfield, giving me plenty of time to alternate between being annoyed and contemplating my journey. My old car had been to Yosemite without me back in 2002. On the great cross-country trek with Turbo the Aussie, Henry the 1990 Ford Taurus had been driven to Yosemite after Turbo put me on a Greyhound back to LA. I was to be in a wedding, and while I can't remember which city Turbo and I had parted in, I remember being pissed when he'd locked the keys in the trunk right before I'd had to catch my bus. He'd been eating a sandwich out of our picnic gear in the trunk, and he had a habit of tossing the keys down inside the trunk while he made his sandwich.

"You're going to lock the keys in the trunk that way," I'd said a few days before.