I got these windows on eBay.

Again. This is a repeat of when I did this on the bay window at 350 8th Street in 2002. And I remember one of the neighbors in her thick JC accent. "Hey, Marie, where'd you get those?" "eBay." (calling down block) "She says eBay."

Last time, I learned a few things about getting them to hang straight, but this time I wasn't able to find the color chains I wanted, so I embraced my paternal roots and did this the hillbilly way.

Thanks to Kraiger for hanging these in my new house in my absence. They look great. 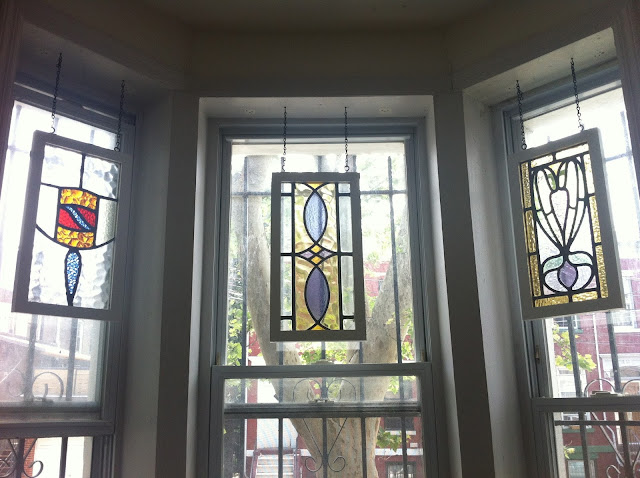 You have to wonder. 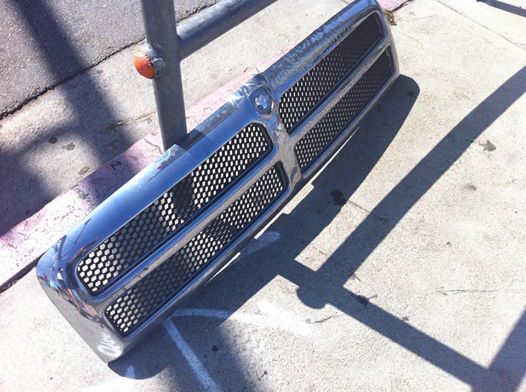 Posted by Marie Javins at 12:29 AM No comments:

I went to Downtown LA a week ago, looking for a fabric shop. I rant into a massive bong district instead. Wholesale bongs, blocks of them. Who knew? Not me.

I am skeptical of Downtown. I hear people singing its praises, talking about its great restaurants. Well, great restaurants are generally wasted on me. I travel alone, seldom having the occasion to sample the wares at a place with a rep and a line. Grit and sketchiness might be wasted on me too. Been there, done that, these days preferring a bit of pleasantness.

But I still went ahead and booked a stay there. I have to laugh--my first reaction was "Well, this is sketchy," and yet I still booked June 29th to July 8th in an AirBnB in DTLA. I wanted to give it a shot, see what people are raving about. Maybe I'll even go to one of the restaurants if I can find one where I can eat at the bar.

I moved from Toluca Lake to Studio City yesterday. The aesthetics are questionable. Toluca Lake is lovely, and the apartment I'm staying in is an upscale version of Oakwood. It's very beige. And yet, it's nice to be anonymous. I left the breakfast dishes in the sink this morning and walked up the hill to CityWalk, a ridiculous fake city sponsored by chain restaurants. I wanted to see Mad Max while it's still in theaters--my trip to see Road Warrior when I was 16 blew my little teenage mind, as did Escape from New York and Dawn of the Dead. I didn't want to miss it.

And afterwards, as I walked the length of the fake city, past the fountain, then walked down the hill to where the serviced apartments overlooks the swimming pool, I couldn't help but contrast the movie with the reality of drought-stricken LA. I don't know what to make of it. I added money to my metro TAP card and noticed my card expires in 2025.

I sure as hell hope I'm not here in 2025. But for while I'm here, I'm going to try out different neighborhoods and enjoy the adventure of living somewhere new and full of bongs and sketchiness. Or whatever each region might bring.
Posted by Marie Javins at 5:38 PM No comments:

Here's how the bathtub worked out, by the way, back in JC.

It came out nice! Much better without tape or a stuffed-up drain.

Did I forget to mention the stuffed-up drain before? Yes, this gem was found in the drain. Yes, charming. So a super-genius lived in my house at one point. Maybe I should make a museum. 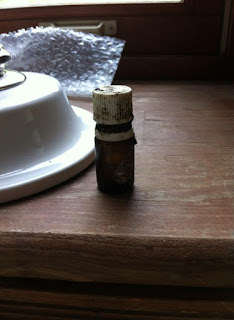 Posted by Marie Javins at 9:24 AM No comments:

You'd think I'd be better at this.

Moving around is my business. In theory, given that I can move across the planet for a year at a time with just a backpack, able to work in Cairo or Kuwait on short notice, I should be expert-level at relocating from JC to Burbank.

But that's not how it works. Because aside from the 2001 MariesWorldTour (which taught me to keep a home base no matter what), I always had a rock-solid idea of home, where it is, and where my stuff waits for me, down the street from my friends. And now... I don't really know. I'm on nomad-duty, without a firm notion of where I'll end up living. What to do here after I clock out.

I booked an AirBnB for my arrival in town. I got something lovely, because I waited too long to book and had to go outside my price range. The little place I'm in, in the Toluca Lake part of town just outside the WB lot, is just wonderful. Spectacular. Beyond my pay grade and created with far better taste and care than I should be allowed. I'm afraid I'll break it--that's how nice it is.

And after the first few days of fumbling, I worked out that the one-dollar Burbank Bus that goes directly to the office is just two blocks away from my housing. Great! Though I rented a car for the second week. But it goes back to Enterprise tomorrow, and then I'll be back to experimenting with the viability of not having a car in this town. There's Uber and Lyft, which might work for me. I'm wary of the new economy, the AirBnB and Ubers of the world, but then, I'd rather see feedback than rent an apartment off Craigslist. I'd rather have an Uber than not have an Uber. I'd rather have an Uber than spend four days driving my car here from JC. I guess we'll see how this goes. In the end, I might be the one with a powder-blue Prius in a month. Or not.

One of my colleagues--well, that's not exactly right--one of my bosses, and there are only so many so I guess it's my boss-over-boss. Or something. Let's say a friend of mine from work, is letting me stay in his temp housing for a couple of nights when this ends, then I go back East for a few days to sort out my house and storage I left in a mess, and then I'll move AirBnBs to either Downtown LA or Hollywood. I want to try some options besides Burbank. So far, I'm convinced that Burbank is the easy answer, but it's best for families. If you look up "ridiculously uncool" in the dictionary, you'll see a mini-map of Burbank. Not in Webster's. In another dictionary. You know the one.

I don't mind ridiculously uncool, but I'm not sure family-life is for me. I wonder if perhaps Hollywood and its late-night eateries might be for me. I'd like to give it a try.

The Blur of May 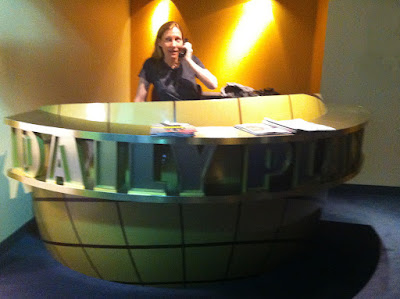 May was a mad scramble.

I was sending 11 titles a week to the printer. That's 242 pages a week. I had help from Joey, Sal, Ana, Frank, and primarily Chris B on the Burbank end, but this was madness. For eight weeks, we got 242 pages to press EVERY SINGLE WEEK.

And we never missed. Some nights I'd get home after midnight. Once, I left the office at 1:18 a.m. But we weren't going to miss if it killed me. Which, somehow, it did not. The whole experience won't happen again--one person responsible for all this wasn't in the original plan, just kind of happened. I doubt it will happen again. I gave up pretty much everything for the duration, and to be honest, it was fun. I guess it wouldn't be fun if that were my permanent state-of-being, but it wasn't, and I got to work with a lot of people I respect and enjoy, and some I don't, sure. That's the nature of massive events. I already miss the adrenaline. The only comic book experience I've had that was more fun was opening the theme park in the Kuwait desert, being overrun by excited children while the Omani Art Director stood over me in a defense stance.

Were all our issues perfect? Of course not. But some were very, very good. Some were odd, quirky, fun...those had me all over them, and Dan the Boss, too. Anyone who took the time to look closely would have noticed people I've been working with for two decades all over these two months. My first months at Epic in 1988 included work on St. George and Doctor Zero. My time in Kuwait included putting out comics by McCrea, June, and Ron W. Make of that what you will, comic book people.

Read more »
Posted by Marie Javins at 1:13 PM No comments:

But Does Geraldine Live in Bayonne?

I was driving the back way to the big Home Depot last week, and I stumbled over this street.

I've been looking for it for a long time, but it only seems to be on one end of the block and not the other. I'm glad I found it before leaving town. 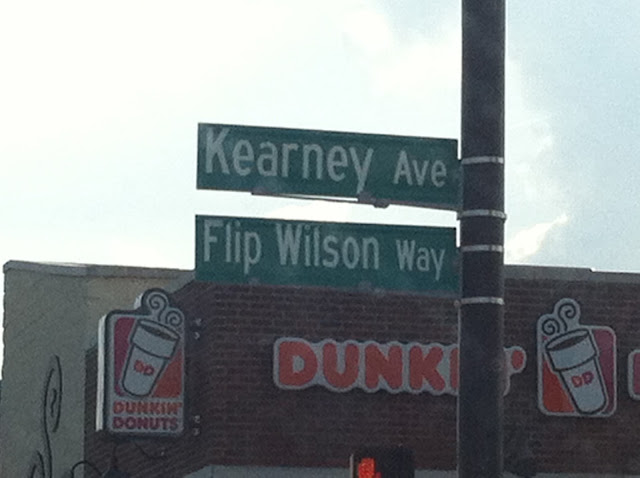 Posted by Marie Javins at 12:25 AM No comments:

My house and my car. 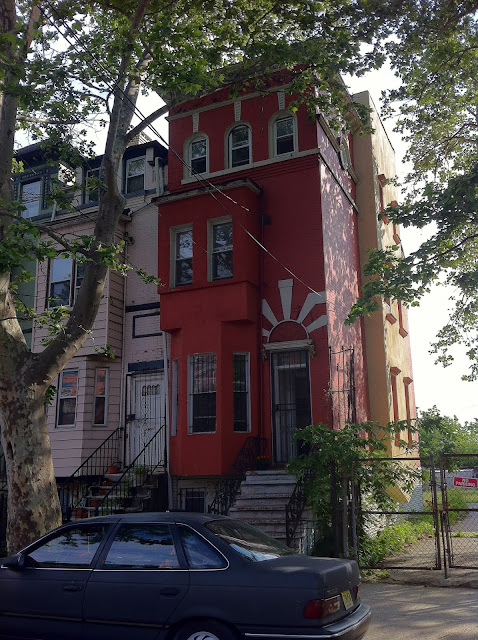 Posted by Marie Javins at 10:03 AM No comments: