I just finished preserving a recently deceased friend's website. That means I put everything into past tense and added a few lines, such as RIP. It was frustrating, because he and I both made our personal sites in iWeb, which is long since orphaned by Apple, and it's hard to manage without specific files, which only exist on the computer the person made the site on. I don't even have my own, and I certainly don't have his.

But I cobbled it together in Dreamweaver, copying and pasting code when the drag-and-drop wasn't happening. And it's done now, not updated, merely archived. There for readers of his work, his friends, his family, and maybe to help me feel like I could do something.

I meet Edward Readicker-Henderson in late summer of 2003. We're both writers, though he worked for magazines, and I took the slower, less profitable book-writing path. He liked to write about travel, as I do, but he actually made a living at it.

A year or so later, ERH went on a press trip to Jordan, where he met Amanda Castleman. We soon met over email, and before you knew it, Amanda, ERH, and I had the virtual watercooler. This was pre-Facebook, so we gabbed endlessly via emails, the three of us freelancing from home or from our laptops from any number of global locations.

We were fast friends for more than a decade, the three of us. You might remember seeing Amanda show up here occasionally, or even as a special guest in Sydney during MariesWorldTour.com 2011. But as ERH become more tired, and Amanda and I stayed busy or used social media to keep up, we drifted off to an extent. He had always been ill--in fact, he used his illness as a point in his work--but he became steadily more sick. I can't say more seriously ill, because he had in fact had very little time to live on many occasions. It doesn't get much more serious than that.

You can cheat death many times, but the house always wins. And we weren't surprised, not much, but in a way, we were. He'd bounced back enough times to where nothing would surprise us.

I was somewhat relieved for him when his pain passed, and he went in the best-possible way, in palliative care after having been visited by family and friends. But it still hit me today, while sorting out his virtual record of being. I can't ask his advice or send him a joke, or ignore his emails when I'm exasperated, then guiltily write a few days later. There's one less person in the world who actually "gets" me now, and there weren't many to begin with.

Here is Edward Readicker-Henderson speaking about the nonsense of having a bucket list. Those are my coffin photos he borrowed. But you know, he didn't go in the airplane coffin after all. He chose cremation. Which is just as well--I am not even sure you can get one of those coffins without a special trip to Ghana.

I don't have a travel or experience bucket list, but that might just be because I've long since caught on. Life's not about country counting or bragging (even just to yourself). Getting on a plane and visiting a location doesn't make you a better person than someone who stayed home. I don't know what the point of everything is, or how to have the best life one can--all I know is there's one less person I can say something like that to now. One less person who won't judge me poorly for not being positive and cheerful. One less person who won't judge me when I snarkily say you can't magic your life or your health with your mind. I'll miss you, my friend.
Posted by Marie Javins at 11:17 PM 1 comment:

A few months ago, I had a particularly bad work e-mail weekend.

My work e-mail comes to my phone. Usually, I answer whatever seems pressing, and leave the rest for Monday. But there was one weekend where someone went so over the top that I turned my work e-mail off on my phone and started fantasizing about where in the world no Internet could reach me.

There aren't many places. The salt flats of Bolivia. Certain spots in the ocean between French Polynesian islands. Even Cuba has connections in the post office and in upscale hotel lobbies. Even Burma has it, as does Bhutan, Tibet...but you know where you can get out of range without an expensive plane ticket?

The bottom of the Grand Canyon. 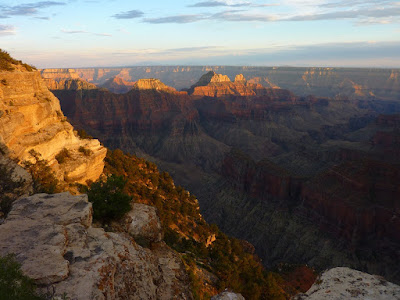 I knew this from the rafting trip I took there in 2008, when I went from Lees Ferry to Bar 10 Ranch over six days with Arizona River Runners. I've booked at the last minute via an agent in Flagstaff, because I reasoned they had access to multiple inventories, and that had worked out great.

What if, I thought, I went back to the bottom of the Grand Canyon? Could I get any farther from the office without using vacation time? But how could I justify a trip there given how expensive it is and how I'd already spent six days at the bottom of the Canyon, (not to mention the mule trip in 2002, a North Rim trip in 2012, and various other South Rim trips, including one just a few months ago?

Easy. One thing I'm good at is justifying travel.

I'd finish rafting, flying IN at Bar 10 this time, and continuing to the end in Lake Mead.

Arizona River Runners had a sale trip listed, which I snapped up. I didn't have a lot of my gear with me, though I'd grabbed a bunch to bring back last time I'd been home. I had to buy used Tevas on eBay because mine had split on the 2008 trip, and I didn't know what had happened to the lilac-colored rainsuit (I probably threw it away due to hideousness). I paid for the trip, bought a same-morning-as-the-trip one-way ticket from Burbank-Vegas, and a return for Vegas-LAX for the evening of the trip's end, and sorted out my gear.

And headed off the grid.
Posted by Marie Javins at 6:00 PM 1 comment: