"How will I know where the hotel is?" I wondered as the ferry jetted from Cancun over to Isla Mujeres. I knew it was near the ferry pier, but that could mean anything.

I poked at my iPhone map and swore at Apple. My hotel wasn't marked, and I wondered too late how I could go about putting Google Maps onto my phone instead of the Apple map.

But then as we approached Isla Mujeres, I learned quickly I had nothing to worry about. The hotel I'd booked with bank points rose up over the harbor, just to the right of where we were docking.

I strolled off the boat, following everyone else around some construction. I turned right and when I got to my hotel, I learned I was too early to check in. I'd gotten the 11 AM ferry, so it wasn't quite 11:30 yet.

I went into the mujeres room by the hotel pool and tried on my old bathing suit. It was neither too tight nor too loose.

I covered up with my street clothes and packed a change of clothing. I hadn't brought a towel, which I realized was a violation of some important rules of intergalactic travel. In my defense, I have in the past carried towels entire years without using them, and I was mainly staying in one place on this trip. A place equipped with towels.

I left my "luggage"—a blue canvas shoulder bag emblazoned with some white flowers and the word Cancun at the front desk—and headed over to the dive center, which I'd booked two trips with. Today I had booked scuba to the underwater sculpture park (the real reason I was here), and tomorrow I'd booked snorkeling with whale sharks. I'd sent a $20 deposit by Paypal to get the early whale shark price for tomorrow. 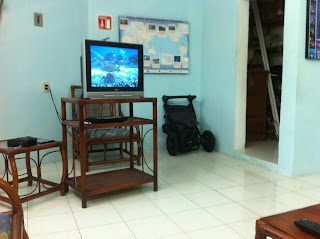 The dive center wasn't too far away, and when I arrived, I agreed my entire deposit would go to today's two dives and refresher course. This was because the dive shop owner seemed a little wary about the whale shark tour. Like maybe he wasn't sure it would really happen. That was fine—the whole dive including equipment, refresher, and photo CD—was only $73 today, so I still came in under a hundred bucks once I added in the deposit.

He shuttled me and another woman upstairs to watch a video in preparation for our refresher course. I put up with the video pretty well. It was basic stuff, but what do I know? I'm happy to re-learn something I don't do so often. I was a little worried, though, when the shop owner lectured us that many people were disappointed by the sculptures. Apparently they expect to see more fish. 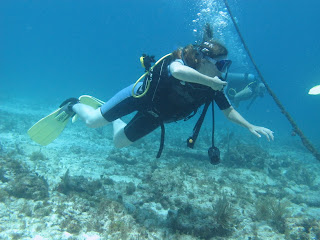 Eventually, we went downstairs and pulled on our shorty wetsuits and got all geared up. We then had to walk down the block, across the street, over the beach and into the surf for our refresher course. This seemed a little dopey, but I guess you have to do it somehow. And that's probably the easiest way to carry all this heavy gear.

"All right, swim over there and back," said the divemaster, Rodolfo.

Okay. I pulled my mask on and swam to the rope and back. Easy.

My colleague had never done this before and she went awry. Rodolfo fetched her.

I have no idea what was going on for the next 20 minutes. He kept taking us underwater and running us through the drills, but the current was annoying, and so was his insistence I keep doing the mask exercises every time my colleague had to do them again. 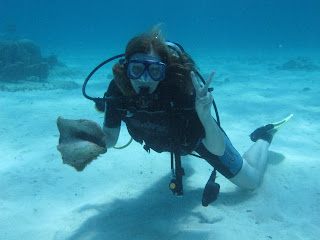 Finally, we were allowed to walk to the boat. Our dive site wasn't too far away, and I'm a bad diver, so I sat for a minute on the side of the boat.

Backward roll. Come on. You know this part.

Finally, I put my hands in place and rolled back off the boat.

And that was the end of the hard part. Once we were in, we all followed a rope down to the sea floor. Rodolfo led us over to the underwater sculpture park I'd come all the way back to Cancun to see.

It was marvelous. Unique. Unlike anything else I've seen. Was there a ton of marine life? No. But there were really interesting algae-covered sculptures. 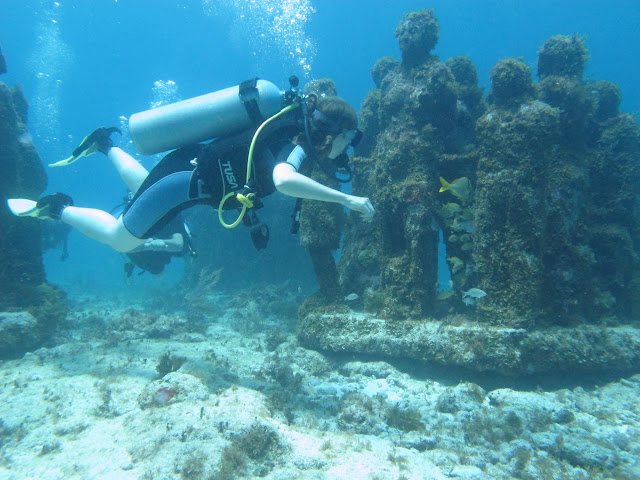 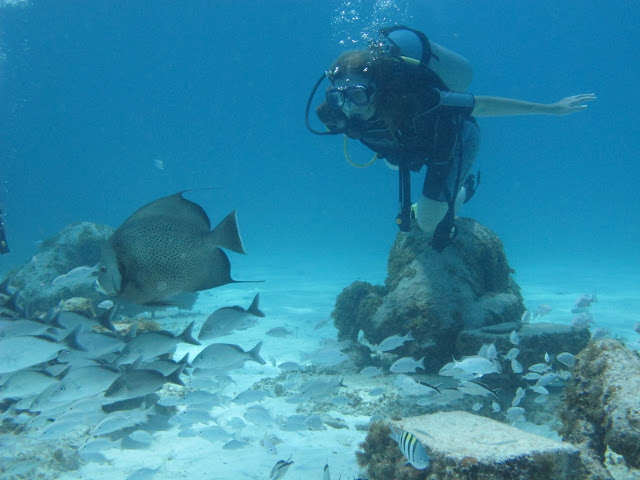