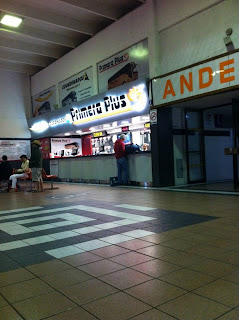 I'm really learning to hate that sound.  But for once, I didn't hit the snooze.

I got up, showered quickly, ate my oatmeal and drank some coffee, packed the last bits into my bag and zipped it up. I was about to put the bag outside the door and slam it shut with the keys inside on the table, when I remembered the one time someone else had been staying in the building this month. They' double-locked the outside door, which only opened with a key.

I went downstairs with my bag, checked the front door, went back up — the motion-sensors had gone off and the hallway was completely black —and left the keys on the table, pulling the door shut behind me.

That's it, I thought as the outside door shut. Better hope I have everything.

I really better, I knew, since I'd waited too long to leave and was worried about how long it would take me to get to the bus terminal. I have a wheelie-bag for non-extended trips, and now it made funny noises as I rolled it over the cobblestones against the silence of the San Miguel night.

A taxi with two men pulled up next to me. Great!

I got in, and halfway to the bus station wondered if maybe it was unwise to get into a dark taxi with a driver and his friend. 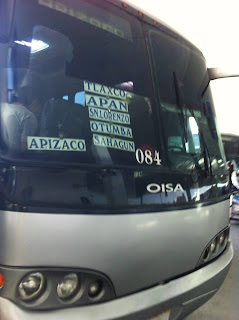 My worries about time were unfounded. I walked up to the counter at 6:05 to claim my internet-ticket, and made the 6:30 bus in plenty of time.

At ten, we pulled into Norte bus terminal in Mexico City. I pulled my bag along and checked it at Left Luggage, walked to the end of the terminal, and bought a round-trip ticket to the pyramids of Teotuhican. Police videotaped all the passengers twice, and I was patted down and had my bag X-rayed before boarding. The ride took about 40 minutes, but flew by because a friend 37-year-old Romanian architect sat down next to me and chatted.

When we paid to go into the ruins, he asked "What time do you close?"

The pyramids close at five.

"I'm staying until then."

I made my excuses and left him to enjoy his long day. I had no intention of staying until five. The sun was high in the sky and my original plan had been to come tomorrow morning, but then I'd had a freelance job interfere with that, and that's when I realized it was better to go on arrival in Mexico City, since I wouldn't have to return to the bus station then.

I was hungry though. There hadn't been time for lunch at the bus station. I munched on peanuts as I looked at pyramids. I climbed a few, and that was quite enough. I didn't relish climbing the big one in the mid-day sun with the hundreds of others already up there.

After two hours, I was exhausted. I exited by the Pyramid of the Moon and flagged down a bus. We stopped in town, where police again took a long look at us, then headed back to Mexico City. 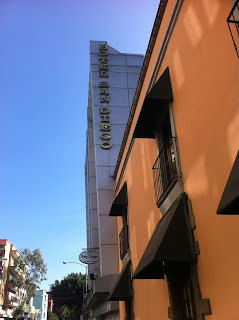 I reclaimed my bag, dragged it down the stairs to the metro, went one stop, dragged my bag through a long hall, down some stairs, under the platform, up some stairs, boarded another train for five stops, and up an escalator. I worried about being the only one with luggage? Was it even allowed? Or were others just too smart to bring bags on such a crowded system? People board the cars like they're the last choppers out of Saigon.

I walked four blocks to Hotel San Diego, checked in, judged it adequate, and found a lovely deli in a market that only serves sandwiches (damn, I'm still off bread, pasta, fruit, and sugar), went instead to a diner for enchiladas which showed up on flour tortillas (I can't win), and then stopped at the souvenir market.

Not quite as good as the San Miguel shops, but a whole lot bigger.

And now, I thought, I'll go collapse at the hotel until morning. 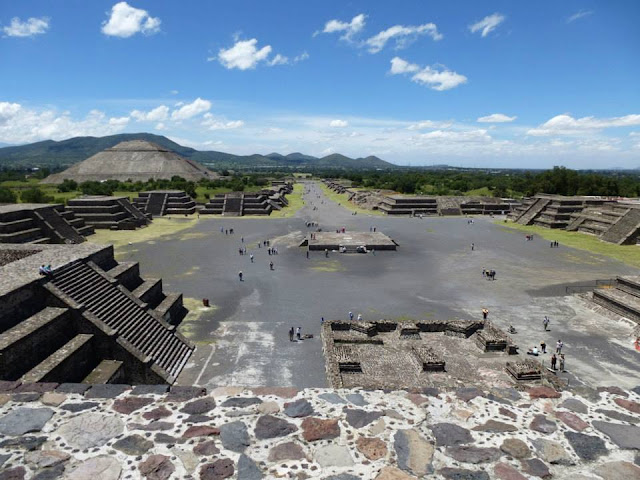 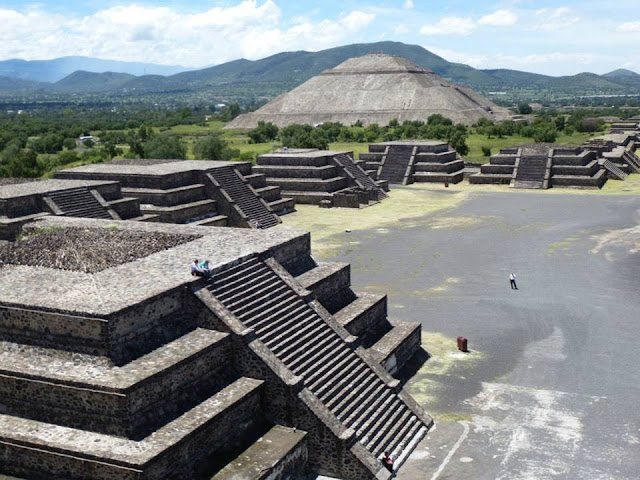 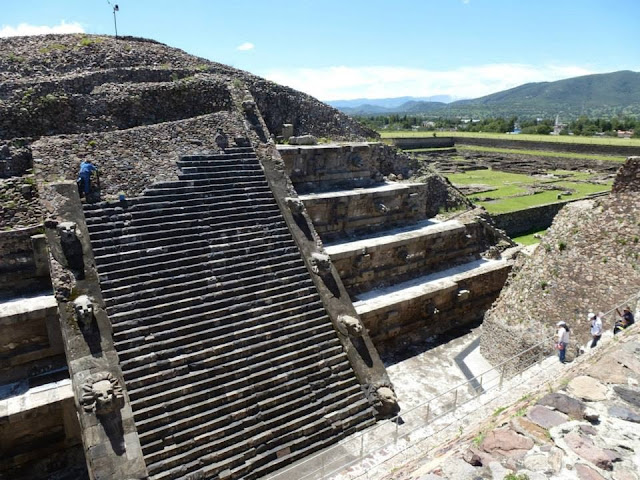 I once met an older gentleman who had traveled across the USA eating mostly baby food from jars. I think the deal was that he had gotten his teeth pulled but hadn't gotten his false teeth yet. So when I feel sorry for all the things I can't eat while traveling, I remind myself of that man!

Beautiful photos of the pyramids! I enjoyed this post. Hello from Ohio. I am here after visiting Linda's blog. :)