Day One, Rafting the Grand Canyon 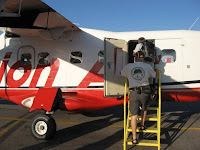 A shuttle bus took me and 20 or so other people to a little airport on the outskirts of Vegas.

My thumbs worked overtime on my phone's tiny keyboard, answering e-mails and prepping my Kuwait, Cairo, and NYC contacts for my absence.

Our group boarded two small puddle jumpers. I sent my last text—a personal one, in retrospect, a fine exhibit of my individual manias—from the runway and shut down the phone. 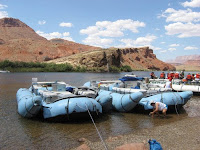 An hour later, we disembarked into blinding sun on a tiny runway in a dusty, familiar-looking town. I'd been here, but my memories of it were clouded, vague. When? Was it when the Other Marie and I had circled the West in a rented compact, many years ago? No. It was in 2002. I'd been through Marble Canyon with Turbo during his cross-country trip in Henry the Ford Taurus.

My phone didn't work here. Just as well. I was going to have no internet or cell for a week. This was a good time to start, though it seems a shame it hadn't started an hour earlier when I was sending stupid texts. 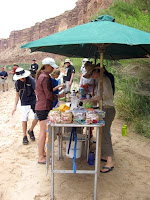 Indiana Jones a run for his money, exactly the Turbo/Herr Marlboro kind of guy I used to go for before I got so burned that I swore them off and started dating the polar opposite (different formula, same results though, crap, doesn't that mean it's me?)—introduced himself as the trip leader. His second was Erika, and the helpers were Chelsea and Lindsay.

Each of 27 or 28 passengers packed his or her duffel into a dry bag. At the bottom of each dry bag was a sleeping bag, sheet, inflatable (Thermarest-style) pillow, and tarp. We'd each get a cot to camp on. No tents.

Fine, that means no tent-sharing. I hate sharing a tent with strangers. We'd sleep under the stars.

We also each got a waterproof day bag. This would hold rain gear (for the rapids), cameras, water bottles, lip balm, and sunscreen.

I dropped my luggage into the blue dry bags, put on my hat, sunscreen, and Bolle sunglasses (purchased in Darwin in February of 2001), slipped on my Teva sandals (scored from Teva for MariesWorldTour in 2001) and looked around. Now what?

"The gas station doesn't sell beer until ten. So we wait."

We waited, finally getting to the boat launch just after ten. 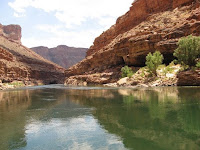 We were split onto two large motorized rafts. Had I wanted to go down the Colorado on a motorized raft? Not really. I'd wanted an oar-powered small one. But this trip had been available when I needed a shake-up.

And shake me up it did. I sat in the front, and right after launching, we started getting wet. I sat next to a 12-year-old girl and a 16-year-old girl, and I was point person to protect them from the water.

SPLASH. I got soaked immediately at Paria Riffle. The water was freezing. The sun was hot. Cold, hot, cold, hot. What genius part of me hadn't realized that sitting on the front was taking point? I wasn't a thrill-seeker. I am lazy and sluggish! Why hadn't I sat in the back?

The rafts motored on, under the only highway bridge across the canyon, the road to Marble Canyon. Henry the Ford would have crossed that en route from the Grand Canyon to Bryce. We stopped for sandwiches, then drifted downriver. 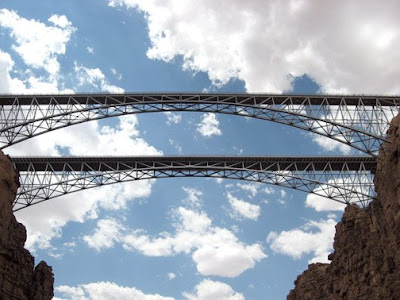 What happened if it rained? Would you have to share a tarp? Or is rain not an issue this time of year?

I just flew over the Grand Canyon yesterday in a jetliner. Over the eastern portion, I noticed that the the water was a ribbon of turquoise, turning to almost white in what I guess were the rapids. I had heard they had released water into the Colorado in order to allow it to return to its original silty color... perhaps it didn't make it to the far eastern stretch of the canyon?

Marc, you're getting ahead of the story!

The turquoise is the Little Colorado. We'll get to that.

If it rains...you get wet. Which sounds awful until you realize that's kind of the point of the whole trip. Anyway, it doesn't rain a lot.