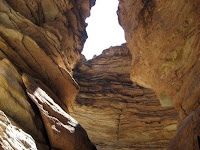 Something was missing when I awoke on the morning of Day Four, on my cot, perched behind a tree above Crystal Rapid.

The pressure. The pressure in my head was missing. The accumulated weight of work stress, undeniable rejection, guilt over lack of progress on projects, and of course the burden of uncertainty over direction and traditional life anchors—all of this combines to shred my confidence, drag me down, steal my enthusiasm, and rob me of my ability to laugh or improvise. It's almost a living, nagging being in my head. A rock that weighs me down.

Unless it's not. And today, four days into exile, the pressure had vanished somewhere into the night.

Delighted, I just about leapt out of bed to greet the day. This untethered feeling is marvelous but elusive. I wanted to enjoy it while I could. 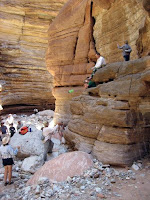 I took the front seat on purpose this time, hanging on tightly as we navigated today's biggie—Crystal Rapid. Later, I moved to the driver's seat in the back, where I almost slid off while holding the video camera. Elk started towards me as I slipped from the chair onto a metal box. But he was driving the boat too. From my peripheral vision, I thought I could see an almost-imperceptible calculation going on in his head. "Can I grab this tourist while maintaining the safety of 13 others and this raft?" I slowed my own descent and he kept driving.

Anyway, I would hate to be tossed out into a big rapid, but this was a little one. I've been thrown into worse on the Nile and the Zambezi, and have learned that holding my breath while not panicking results in being spit out below the rapids, the lifejacket keeping me afloat. 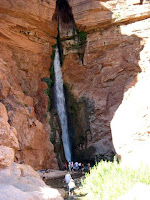 The video camera wouldn't have done so well, though, so I'm glad I didn't get to intimately know the Colorado.

We passed Elk's "nemesis," Bedrock Rapid, which involved a massive, weighty boulder, sharp 90-degree turns, and gliding over an underwater rock with the engine pulled up. At one point, the other raft lost an engine, but Erika quickly changed it.

We stopped in mid-afternoon and hiked to a waterfall.

"You've got a flat," announced the 12-year-old's mother. I looked down at my eight-year-old Teva sandals, scored free from Teva at the start of MariesWorldTour.com. 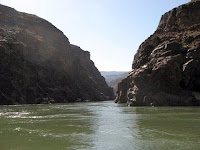 "Crap." A teensy rock had lodged into the sole, letting in sand. Now the sole had split completely. A metaphor for my own rock, I thought, my own soul's nemesis.

"That can be repaired," announced Elk.

Me too, I thought.

True to his word, after dinner, before the guitars came out, he punched a hole in the toe and threaded a zip-strip through the sole.

Until the next day, when the other shoe went. I'm trying not to read anything into this. 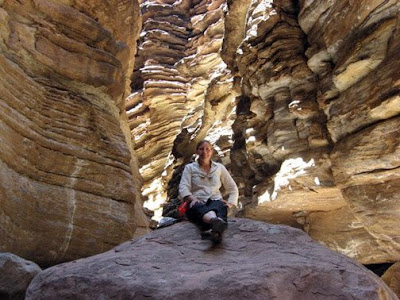 I didn't have the heart to throw the Tevas away. I just put them into an old suitcase along with the few items I wore for all of 2001, an old Slacker T-shirt, the dress I wore as Maid of Honor at the Other Marie's wedding, and the famed green spiral dress.

And some gorgeous short flowery numbers from the White Girl outlet. Wonder if I can still get away with those...

The Grand Canyon looks smoggier than it did on our '89 trip because it is summer. I believe we went in October, and even then the advice was to avoid summer because of the smog. Also, vehicle traffic was restricted in summer to cut down on emissions but we were free to drive around in October.