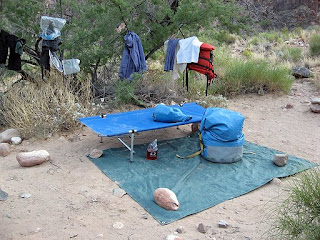 I collected my now-dry clothes from the branches I had stuck them on the night before. I usually carry a few clothespins in my pack when I travel, but because I was going with an outfitter instead of on my own, I hadn't thrown together the same kit that I usually take.

But were I to go back to the Grand Canyon for more rafting—which I won't because I already have no idea how I'm going to pay for this last-minute, soul-recovering trip when the Mastercard bill shows up*—I'd take clothespins. That way I wouldn't have to worry about the wind blowing away my clothing.

I packed my sheet, pillow, and tarp back into the dry bag. My sleeping bag sat unused at the bottom of the pack. I dismantled my cot and folded it up into its sling carrying case. I smeared sunscreen over my feet, hands, shins, neck, and forearms, then pulled on my rain gear over my bathing suit.

The rain gear, which the outfitter rightly insisted we bring along, had been on sale. I had searched a few places first—REI, Paragon Sporting Goods—but plastic outfits were too pricey for one-time use. And given that I'd never needed raingear before in my life (umbrellas work fine in most cases), I didn't want to spend a lot on something I'd never use again. I'd found the sale gear online and bought that. The catch? It was purple. 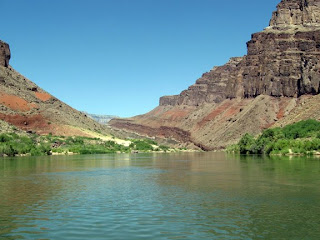 "It's Barney!" One of the dads on the trip had exclaimed yesterday, when everyone wore their raingear in the morning, having learned the previous day that the Colorado water is freezing cold.

So much for soul-recovering. I feel so much better now.

I pulled on my hat, sunglasses, and Tevas and headed to the raft. My capris and long-sleeved shirt were at the bottom of my daypack. I'd change into them by lunchtime, when the sun had warmed the day up.

We motored downriver out of Science Camp, heading towards the Gorge, the section of the Grand Canyon that everyone who goes to the South Rim views. Today's journey would send us through some of the biggest rapids and some of the most spectacular scenery.

Less than an hour downriver, Elk pulled over.

"Let's check on this hiker."

A shirtless man lay in the shade under a tree, at the end of a long trail. His backpack was beside him. 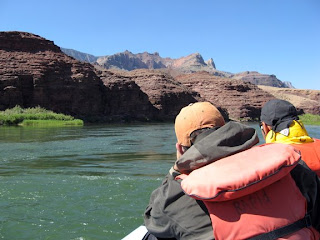 "Sure. You guys seen an AzRa raft?" (I think it was Azra, but maybe it was another outfitter. Don't hold me to this.)

"They'll be here in less than an hour."

The hiker was the new guide for a different group we'd seen yesterday. One of their guides had been taken out from the Little Colorado by helicopter med-evac.

"What was wrong with him?" I'd asked our trip leader.

"His knee had swollen up. It's probably nothing, but they don't take any chances because of the new super-bug that's been virulent. It gets in through open sores. Like these." He'd motioned to his cracked heels, something that was happening to my heels too.

"We're all colonized," one of the doctors on our trip (a passenger) waved off my surprised concern.

"And it's going to get worse," said the other doctor.

"What can I do to not be colonized?"

"There are various anti-bacterial washes, but no one is sure if they work."

We left the hiker and passed under the Desert View Watchtower on the South Rim. It's a rustic observation tower designer by architect Mary Jane Colter in 1932. My mother and I visited it on our first Grand Canyon trip in the late 80s or early 90s. I no longer remember the year, but Marc and David will, because they'd just moved from New York to Hollywood. I was headed cross-country by Greyhound to visit them. Mom flew into Phoenix and met me.

"Just so you know, there's a kid up there who put a quarter into the binoculars and he's watching us right now." 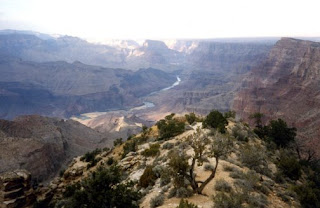 And we motored on. Today was a huge day—incredible gorge scenery, constant rapids, and some of the big 'uns.


*Cost of a Grand Canyon rafting trip? A few thousand dollars. Cost of a quick fix to a battered ego? Priceless.
Posted by Marie Javins at 9:36 AM

Steve had just gotten there too. He was visiting. Didn't he drive out with David and Chris I? Did you not drive there with David then? Maybe you drove the Ghia...

David and I drove together, and then he shortly went back to NYC and drove *back* out with Chris. I'm not sure on the date of their return...but it was probably sometime in early 1990.

It was definitely 1989. I have pictures, of course.

Eep! My mother posted a photo of me with the most dreadful short hair.

I used to let the students at Vidal Sassoon Academy do whatever they wanted to my hair.

That was actually one of the really good ones. You looked great and sassy! Now I am glad I can't find some of my Sassoon dos!