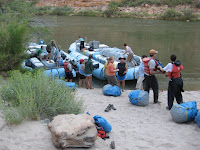 Our guide motioned at a tall, thin rock formation that towered above the banks of the Colorado River.

"This campsite is called Indian Dick," he announced. "Or it used to be. I've seen the old guidebooks. Now it's officially called Mile 23."

"Navajo Richard," added his helper, all smiles and brightness.

And with that, all the passengers lined up in front of the rafts. As each duffel (in a dry bag) came off the rafts, it was passed to the campsite.

I took my bag, labelled B21, and trundled uphill. There wasn't much shelter, but I wanted some measure of privacy. We were camping tent-free, with fold-up cots that kept us off the ground and away from bugs and scorpions.

"We just get wet and laugh about it," said Erika. That was the point of the trip, right? To get wet?

Anyway, it almost never rains there. That's why we have to pack everything out, including sewage. The lack of rain means it would just sit in the ground for years. About 22,000 raft the Grand Canyon each year. I'm not sure how many pounds or tons of poop that would equal, but I can see why the National Park Service wouldn't want to leave that shit lying around.

We'd rafted along for several hours, and I'd been introduced to the concept of taking one for the team as I'd been on point. The 12-year-old girl sitting behind me kept thanking me for blocking her from the onslaught of whitewater. She had a snarky sense of humor for such a young girl. 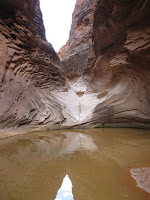 We'd hiked up to a scenic pool in mid-day, and there Erika had offered us salty snacks. I hadn't eaten many, and now, at dinner time, had a terrible dehydration headache. I promised myself to eat and drink more tomorrow, then washed in the river and went to lie down for just a minute on my cot.

When I awoke, it was the middle of the night. The sky was bright with millions of stars. The moon lit the landscape up beautifully. I peeled off my clothes, put on my "Alice Springs" tank top, pulled the sheet over me, and stared at the stars.

My headache was gone. 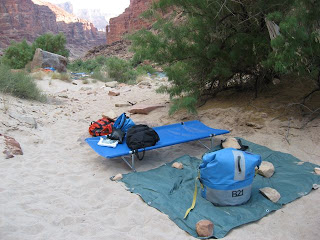 Take a few clothespins along. You'll want to dry your clothes on tree branches.

I was in the Canyon last June and I recognize many of the sites you are camping in. My group called our toiliet, the "groover" named for the grooves it left in one's fanny after sitting on it (basically, a WWII water canister). Have a great time. Take lots of pictures. Drink lots of water.

That's right, it was called the Groover. Important detail that I forgot.

But it has a seat, no more grooves.