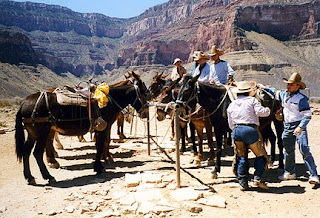 I promise I'll quit talking about the Grand Canyon after this. But I wanted to mention another trip I took into the Canyon, in 2002.

During Turbo Tour in 2002 (one of the three-and-a-half "lost years" between MariesWorldTour and the start of this blog), I went across the US and Mexico with Turbo the Aussie and Henry the Ford Taurus.

At the Grand Canyon, Turbo foolishly hiked from the rim to the river and back in a day. "That warning is a challenge to an Aussie!' It wore him out for a week afterwards. I took the mule trip, like the Brady Bunch, and was only sore for a day or two.

The other times I went to the Canyon (besides this recent time which involved rafting), Mom and I rode around the rim on horses, and the Other Marie and I took a scenic flight over the Canyon. For some reason, Marie and I took very few photos during the flight, but I have dozens of us at nearby "Bedrock City." 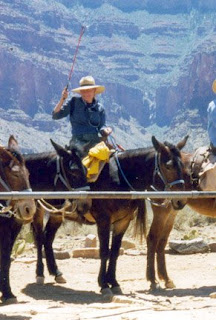 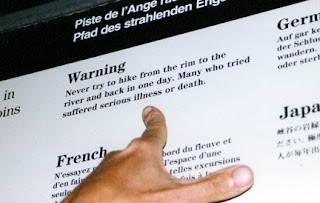 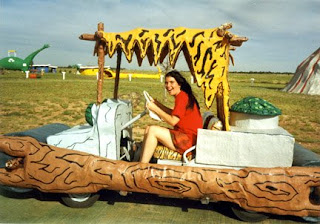