I have to admit, I was getting a little tired of being doused with cold water. I'd started to look forward to getting back to Vegas tomorrow and having a long, hot shower. My improvised showers—dumping mugs of Colorado River water over my head after soaping up (with biodegradable soap, of course)—were producing somewhat gritty results. 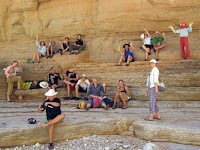 But still, lazing around the raft listening to the symphony of the engine mixed with buzzing cicadas was a marvelous privilege.

Today I was on Erika's raft. Which seemed fine until I heard that Elk had given every passenger on his raft a manicure during a slow hour.

We pulled up at a slot canyon after lunch for swimming and shade. One passenger had brought her watercolors, and the day turned into a festival of face-painting and kid-art. One kid painted a picture of Elk driving his raft—a big, blue raft captained by a man in a green sarong and a bandana. 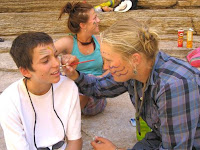 Looks silly but keep the sun off.

Then, it was time for Lava, the most challenging rapid in the entire run, named Lava because this part of the canyon is covered in dry, black, ancient lava.

I moved two seats back for Lava. Enough! I'd been swearing at walls of water today. In front of children. Lava was mind-blowing, but I think I was too tired to be threatened by the rapid this time.

Our last night on the river included steaks, guitar music, and even a tango. 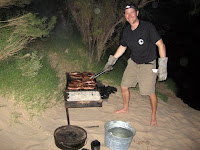 "August 25, 1869 — Great Quantities of lava are seen on either side; and then we come to an abrupt cataract. Just over the fall a cinder cone, or extinct volcano, stands on the very brink of the canyon. What a conflict of water and fire there must have been here! -Powell Report."

Forgot to mention my rash! In addition to broken shoes, I had a rash on the back of both my arms, big welt-like bumps.

yeah, it was probably time to go home.

What is a "cicada"? Do they have a certain sound or smell. I think they are mentioned in the Eagles "Hotel California" song and I've been curious to know. Perhaps they are the same thing?
Tnx,

Maybe you called them "locusts" as a kid. I know we did. They only come out of the ground once every seven years and they leave their shells on trees. They are bugs.