What A Difference A Week Makes 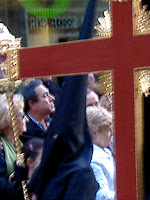 I was in the thick of the crowd before I realized there was even a crowd, before I had time to avoid the teeming masses. I instinctively put my left hand over my wallet, which I’d slipped into the left pocket of my expensive new Barcelona coat.

And then I was stuck. I pushed on, with no way back and no clear way forward.

What was going on? Was the Easter Bunny about to make an appearance? Or was I going to see Barcelona’s Easter Parade, perhaps a uniquely Catalan take on bonnets?

No. It was a religious procession. Something for Good Friday, perhaps, as it was the Friday before Easter and the shops were closed. That's Good Friday, right?

I know very little about Catholicism, but I assume this was a Catholic procession. First came men in black robes with black pointy hats. Then some drummers. And finally, a life-size replica of Jesus dragging a cross down the street. I took a few photos and 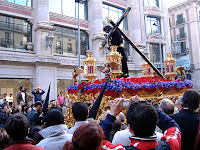 pressed on, passing what looked like an especially gory statue of a dying Jesus being held by… Mary? Mary Magdalene? Every single person reading this outside of Kuwait—heck, probably even in Kuwait—knows more about what I was watching than I do.

Uncomfortably, I snapped a few photos and left the area as quickly as I could. A week ago, I was in a part of the world where paintings of holy people don’t even have faces. And here there were especially graphic images. What a difference a plane ride can make.
Posted by Marie Javins at 7:57 PM

That said, I despise plane rides. Hate 'em. Hate being squashed in for 8 hours, treated like a child, having to take my belt and watch off repeatedly to get on the plane, and so on. Not to mention global warming. Will someone please start up a regular transatlantic ocean liner so I can quit flying?

Amen! I hate being squashed up too -- why should a plane be less roomy than a bus? And having to remove your jacket and shoes at security is downright undignified.

Spanish Catholicism is lots bloodier than anywhere else. They not only want to see a crucifix, they want to see lots of blood running out of that guy up there. Some people want Christ praying in the garden, the Spaniards go straight for the scourging. It's gory stuff.