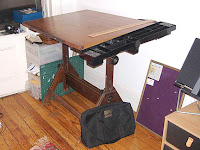 You might remember that last autumn I installed an air admittance valve in my old condo's PVC pipes, and also replaced the bathroom vanity, sink, and faucets. But in truth, these are activities that are more fun with a friend. Sometimes it sucks to be alone.

Moving is another one of those times.

I've been roping Michael Kraiger into helping me with heavy objects or anything involving power tools. But he's sick this week. So when it came time to reassemble my drawing table, he wasn't here to explain to me how he'd taken it apart in December.

Jon Babc0ck emailed over photos of his own drawing table and I was able to wrestle the beast to a stalemate, though in return it covered my legs in bruises. More importantly, Babc0ck said "Why do you still have a drawing table?"

Nostalgia, I guess. I should really throw the damn thing away.

Once—years before MariesWorldTour and close calls with dik-diks took over my life—drawing tables were a major tool in my trade. I colored comics. Before Photoshop, I'd color using watercolors. Colorists were initially limited to a set palette. I was creating painted guides for where the colors went in a comic book, and then had to go through and mark each color with its value. Y2R2B3 means blue-gray. YR means fire engine red.

I spent years hunched over drawing tables, tilted at precarious angles. And in the early years, I was also pasting word balloons onto art on my drawing table. I'd use an X-acto knife and a cutting board to cut out the balloon, then would glue it to the page with rubber cement. A little burnishing, and voila, a finished page.

For those of you who know this sort of thing and click on the watercolor samples, yes, Pollina has two letter Ls and Bachalo has only one. I know that. I didn't make that site, and the guy who did is way too busy with an inking deadline to fix that. Right, Steve?

Marie--keep the table! (if you have the room). I used to have one just like it, and yeah, putting 'em back together by yourself is an exercise in swearing. I still have the drafting table I spent years at doing the very things you described. And like you, it's now all digital. But the table has lots of memories, and these days I do actual artwork on it. What a concept ;)

Remember the old Chemical Color chart? 64 colors and half of them turn to mud once the comic was on press...

Susan! Where have you been!? Right there in AZ, I guess... color charts... I think I still have a few. I even know where they are, but the box is in the garage. Maybe I can post one next week.

Ha! When I started in ads, we still used to have a guy whose sole job was to copy check press ads once they were at the cromalin proof stage. A hangover from the days when type was set with blocks of metal letters.

Not sure what he's doing with his time now...

Hi Marie! Yep, still here in AZ, coloring, lettering, planting flowers (which the javelina then eat). Beats sitting in a hermetically sealed building off the interstate, however ;)

Ah, letterpress. Ah, cromalin proofs! We used a waxer at Gladstone back in the day to paste down lettering, that was fun. Used RC at home. I still have half a gallon sitting around somewhere from when Viz finally switched to all-digital production. Our work used to invlove a lot more physical material, didn't it? I've got boxes of exacto knives, curves, triangles, dried-up rapidographs, proportion wheels, all left over...

Happy belated birthday. The forties are pretty cool once you get used to the idea ;)