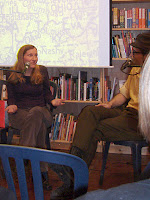 My biggest worry at being interviewed by Jeff Stark at Where Have You Been was that I'd have a massive coughing fit in the middle of it. My second biggest worry was that I would laugh nervously at my own jokes and say the word "like" too much, and generally look like an idiot.

So I had bought some house-brand cold medicine at Duane Reade (the pharmacy). And it fixed both worries. Not only did I stop coughing, but I felt oddly calm and alert.

I went on second, after a woman who helps Palestinian kids to produce their own digital media. She was working hard to do good things and then I came on and talked about robots driving camels and rats-on-a-stick.

About 30 people were there, including Kelly and six friends I have known for over 15 years each. Jeff kept me on track, steering me back to the Ethiopian truck accident or being chased by a hippo when I started to waffle on excessive detail. People laughed. I gave out as many Stalking the Wild Dik-Dik postcards as I could.

"You were great," whispered Al to me after I left the microphone.

Categories: book, Travels with Myself

I can't wait to do cold medicine with you! Maybe new years? Or next birthday! Finally a substance we can enjoy together!