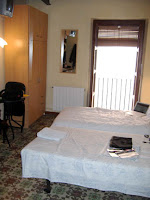 "Don't these people know how to form a line? What's the matter with them? And why does it involve a ten-minute wait to buy a bottle of water anyway? Don't they have shops here?"

Was I still in Cairo? No--Italy! Specifically, Milan Malprensa airport, during a long layover between Cairo and Barcelona. My Egyptian friends do struggle with the concept of the queue, especially in the Cairo Metro, but you can by a bottle of water just about everywhere.

Why had I left? I was kicking myself. I hated Cairo at first, sure, and actually, hadn't been real fond of it in the middle either. But I'd scraped together a life there. What was waiting for me at home? Routine. Moving furniture up four flights of stairs. A lot of expenses. A birthday, in which I'd turn... 41.

Okay, the birthday is going to happen no matter where I am. Even if I just stayed in the Milan airport and refused to move, time would still pass.

I finally boarded a flight to Barcelona, and there discovered that the rain in Spain doesn't fall just on the plains, but also on the planes. And the airport, and the highway, and the entire city state of Catalonia.

I put my giant wheelie bag into a luggage locker at the Barcelona airport. See? I can learn. I took the small bag with just enough clothes for a week, and headed down to the old city through the drizzle. I'd taken a studio this time, same as a year ago. I went to an all-you-can-eat place, ate enough salad to qualify as an honorary rabbit, and then returned to my studio and fell fast asleep.
Posted by Marie Javins at 4:34 AM

Categories: Barcelona, Egypt, Travels with Myself

I am so proud.

Sniff. (She wipes a maternal tear from her eye).

It was, um, the cheapest bag at the Barcelona department store when I broke the first one. I mean, I think you're talking about the wheeled duffel. But maybe you're talking the little bag. Not sure, actually. What the hell is Amanda Castleman talking about? The iBag? Maybe Apple will start making luggage.

What is with the two-twin-beds-pretending-to-be-one-big-bed thing in Spain?

What does that balcony look out onto? Something quiet, I hope.

I'll take a photo tomorrow. It looks out onto a normally quiet pedestrian street, but last night some street cleaners made a racket, which led to the person in the studio next door playing music loudly in order to overpower the racket. Curse the mp3 player and the traveler!

A pod bag is a wee luggage inside a larger one. The big beast stays in storage, the duffel slips effortlessly into the city on public transport.

I'm pretty sure we covered this concept during the Great Wheelie Crisis, if you review your notes...

Then again, it may have been a conversation I INTENDED to have and then forgot. Anything is possible amid this level of stress.

Um, no offense, but I've always done the zip-off or collapsible bag, not bag-within-a-bag. Like the spare bag you carry in your pocket when you have a dog. More a poo bag than a pod bag, I'm afraid.