Everyone Loves A Bargain 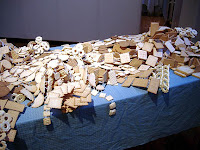 To be an artist in JC, you can't be too full of yourself. Artists who are vain cannot stomach admitting that they live NEXT to New York City, instead of IN it, so in JC you usually find artists who are down to earth, perhaps a bit realistic, and in some cases humble.*

And sometimes, they all get together and show that the JC art scene also has a fine sense of humor. 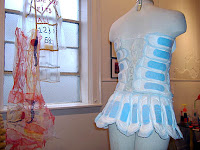 I've bought a lot of tools at these places, and always stop in for cheap garbage bags. And with Turbo, I visited 98¢ and 97¢ stores across the country when we camped our way across the USA in 2002.

Most of the artists had fun with the theme. Paul from ProArts created a sculpture from 99¢ store crackers. A guy named Norm had holiday lights illuminating ice trays. One artist made a dress out of maxi-pads. Another had painted three lovely images of the impressions of 99¢ store neon signs as one whizzes by them while driving.

On the way home, I walked by the real thing. I saw some people down on their 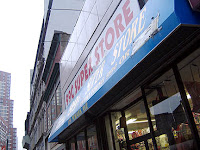 luck in the 99¢ stores. Not people slumming and making art, but people who look at bargains as a necessity in their less-than-rich lives. I wondered briefly if it was proper to be using one man's economic necessity as another's humorous art. But it's okay. I am sure these artists are as dedicated to the 99¢ stores as I am, and it's humor with appreciation for the subject, not mockery. But I still didn't go in. I'd bought my trash bags at ShopRite a few days ago.