Watch Out Where the Huskies Go

Do you happen to know any cheap ways to get to Antarctica?

I went to Antarctica once, on the inaugural GAP cruise in February, 2004. It was a Quark Expeditions ship, before GAP bought their own ship. And while this does not make me qualified to call myself an Antarctica tourism expert, I do have an opinion. And I thought it cost a lot then at $3,000 plus frequent flyer miles. Now the same trip is up to $5,000!

So how does a would-be Shackleton or Scott get to Antarctica without having to eat his own huskies?

Fly over it on a day flight out of Australia. This obviously only works financially if you are already in Australia and can get the "cheap" seats. Prices start at (squirm) $900.

Get a postgraduate certificate in Antarctic Studies in New Zealand. This is one of my unrealized dreams, that due to its expense shall be filed away under "never going to get around to that." The study program lasts fourteen weeks and

includes 10 days of camping on Antarctica. Wow. If you're Kiwi, Aussie, French, or German, it'll set you back $3k, which is less than the cheapest Antarctic cruise. But if you're me, it costs $7,600. Gasp. And you still have to pay for housing in New Zealand.

GAP and Tucan cater to "budget" travelers. All reputable cruise companies will be listed here. Rumor has it that you can show up in-season in Ushuaia and get a discount berth on a ship due to leave port immediately, though I know no one who has actually done this.

But to be honest, I was disappointed in the cruise. It felt a bit cookie-cutter, as I was shuffled here and there in a pack. It's Antarctica--there are rules about how tourists get to move around.

The way around this is to spend a little more and go on a trip that includes kayaking or camping. This is the only way to get away from the constant engine sounds--that of the ship, and that of the inflatable raft that zips you around. It's the only way to strike out on your own, because you're not allowed to go traipsing around unsupervised on land.

So, was it worth it?

I dunno. It was a LOT of money. I really think it would be incredible to go on the educational program or a kayaking/camping program. I'm not a hundred percent convinced that the mere cruise is worth the expense. If you intend to go anyway, fork over the additional $600 for kayaking and do it right. 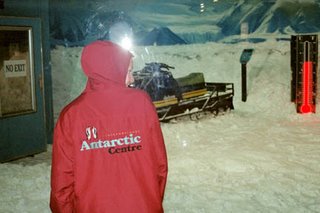 Closest I'll get to the Antarctic Studies degree is the visitor's center.
Posted by Marie Javins at 9:46 PM

1) My Antarctica photos are here.
http://homepage.mac.com/mjavins/PhotoAlbum16.html

2) When I took a taxi to the airport for my flight to Argentina, the driver asked where I was going. "Antarctica." He looked puzzled. "Are you from there?"

Came here via Max's (Gonomad Blog) blog. Wow! the prices you have quoted sound so exorbitant more so when I convert them in Indian rupees, the currecny I earn in.

They're pretty exorbitant in all currencies! And then you still have to factor in the airfare to Ushuaia, Argentina (usually via Buenos Aires). I was lucky that it only took 30,000 miles to get to B.A. on Continental at the time, and I had a friend who was in B.A. so she bought me the onward ticket locally.