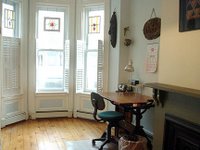 You know all those stories about gentrification forcing people out?

How the big money comes in, how the families, artists, and writers who have made a neighborhood into somewhere the big money wants to live are pushed out by "progress?"

I am now one of those writers. My condo goes on the market tomorrow. I just left a condo association meeting where I learned I'll need to fork over a few thousand for a new roof. Even though we just got a new roof in 2003, even though an architect said the new roofing materials were fine but the execution was flawed and needs proper finishing. "Only $1,200," he said. "They didn't do the flashing and sealing right, and that part in the back needs rebuilding."

The others in my building--four of which recently paid triple what I paid, but that's no big deal because they surely make more than six times my puny income--just want a new roof. And "Just tear it up and replace it" isn't going to go away. That will be the solution to everything in this hundred-year-old Victorian. All the DIY-ers have moved on. Waiters, concierges, dancers, actors, small business owners, and graduate students have been replaced by suspicious accountants and paranoid internet professionals. "Why did you guys say you had a new roof?" "Uh, because we did." "And then it started leaking right after I bought?" "Well, yeah."

I'll have to borrow money. And then it will happen again. And again, each time someone sees a crack in a wall. And since I don't expect that Stalking the Wild Dik-Dik is going to hit the bestseller charts, I'd be going further and further into debt with no hope for a windfall. It certainly negates the cheap property taxes and monthly maintenance of the place.

I put so much into this place, into both the entire building and my individual unit. On Day One, Michael Kraiger and I were in here with my heat gun and Jon Babcock's circular saw. Yancey took a few minutes out of his illustration work to tear up the carpet, then Kraiger and I went at the old vinyl tiles with the heat gun. Then we set the saw depth at just under half an inch and scored the plywood. Pried it all up with a wrecking bar and then called the sanders. The lovely heart pine floor in the photo above was the result.

Turbo (my amazing ex, the only proof I have that not all my taste in men is bad) put even more into my place. But sweat equity doesn't count. Only money counts.

There are worse things than losing one's home. Heck, I've probably experienced three of the top ten worst things to lose in the last year alone. But it's just walls and doors and transoms and floors. Loss on this level sucks, but barely rates on the charts of worst things to lose. It's worse than losing socks or a wallet, but it's not my health, my sanity, or my jobs. I'll live.

I always felt guilty when I lived on Avenue B because my presence was assisting in the pioneering of Alphabet City for "The Man." I was broke, sure, but I was a white person who bought a condo in a neighborhood of minorities living in rentals. I watched as the neighborhood was gentrified, as the families were forced off the island of Manhattan, the squatters pushed out, and the artists and musicians all fled to Brooklyn.

Maybe it's karma. The gentrifier becomes the ousted.

Update: Jessica Del Forno is sending me the forms and we've agreed on a price and a commission. When I have time, I'll put up photos at a URL I own, hamiltonparkcondo.com. It's heartbreaking, but it's the only sensible course of action.
Posted by Marie Javins at 7:50 PM

Maybe I really will end up living in the T@b.

Well, I can recommend listing your house for sale on ebay. Someone who saw our auction actually brought his family out this weekend to see our Montross house. They didn't make an offer, but at least they drove out here ... which is more than the results from most of our newspaper ads.

That sucks, Marie. You have a cool place. :(

I guess that's one big difference between condo living and owning a private house that I'd never considered...you can be squeezed by the other members of the condo or co-op who want to add expenses that you all must share. A house may still need a new roof, but as a sole owner, one can decide to wait until there is money to deal with it.

If it was my house, I'd have the architect fix the previous roofing job and still have ended up paying less for the whole thing than my share of the deal here. Or just go tar the leak myself. It *is* a new roof already, not like it's an irrational or bizarre decision to not want another new one. And I was the only one in the room who bought the last roof. All the other owners have turned over.

I love my place. I don't want to leave it. It's been kind of a rough year though I've tried to keep it off the blog. I wonder what's next. What evil next thing does life have to throw at me? Pages out of order in my book? Misspelled name on the cover? Horrific reviews calling me a racist and anti-African? A dreaded call from the doctor asking me to call back about some test results? A broken car? I can hardly wait.

On the bright side, having no home will encourage me to get off my butt and go see West Africa.

Here is the answer to your housing problem...http://www.yurts.com

Become part of the Yurt revolution. Buy a cheap spec of ground some where and a 30 foot diameter yurt (less than $10,000!!)

Gentrification is something that effects everyone with an average or less than average income and net worth. House "flipping" has made the problem worse and there appears to be no end in sight. Recently some friends of mine sold their mid-seventies, beater, split level for $500,000 to a young guy who hopes to dump 20K-30K so he can sell it for $600,000. Sadly it will probably work. Someday with madness will hopefully end, but I'm worried that the fallout will catastrophic. People will be stuck with homes that are worth far less than they owe and be forced to stay or they may be forced into bankruptcy.

I'm in the same boat as you. I live in and own a condo where the costs increase every year. I don't like the building I'm in, but I can't afford to buy anything else in the city. My solution will likely be to sell and move east where real estate prices are more reasonable. A yurt might just be the answer.

Trust me, the madness is not only about to end, the end has already begun. ARMs, creative financing, and get-rich-quick schemes will indeed have a catastrophic effect. "Real estate never goes down," they tell you. Bzzzt, wrong answer. Save it for those incapable of reading public records.

If I can manage to sell, I am going to sit it out and wait for a while, and let the market shake itself out. I love my condo but I can't swing additional expenses. If I can sell now, wait, and buy later... I am quite sure I will come out ahead. And if not, well, there's always the T@b. Or the yurt.