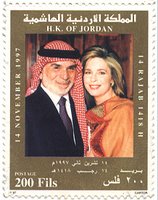 Speaking of cool postage stamps, I picked up this King Hussein and Queen Noor one in Jordan in 1998.

King Hussein's unfaltering commitment to humanitarianism, compromise, and consensus is known throughout the world. But I didn't know much about Queen Noor until I started reading her autobiography.

Queen Noor was educated at Princeton and was part-Swedish, part-Lebanese, and all-American before she met King Hussein. Her education was in urban planning so she was able to put this to use, first at a job in Iran and then later in Jordan where she happened to meet one of the world's most eligible bachelors. She helped institute dozens of development programs in Jordan. For years, she lobbied hard for better understanding between the US and the Arab World.

I was interested to read that after her miscarriage early in their marriage, King Hussein couldn't face the trauma. He could face the responsibilities of the world and could help others, all while handling the stress of developing Jordan and concurrently negotiating with the entire world, but he just couldn't handle personal grief. He shut it down and moved on to more global issues.

I'm still in the middle of the book, where she talks about the Iraqi invasion of Kuwait. She wrote about the numbers of refugees arriving in Jordan. Nearly 3 million people all totalled. Many of these had been working in Kuwait--Filipinos, Egyptians, Pakistanis, Palestinians, etc. One of them became Queen Rania. She attended high school at the same school as a pal at my Kuwait office.

There is a new Queen, but that doesn't mean Queen Noor is out of a job. She still gets to be Queen, not King-Stepmother or something like that. King Hussein's mother was still Queen when Queen Noor was Queen. When you're Queen of Jordan, you get to stay that way. Which is good for Jordan, because Queens work pretty hard there and there's plenty of work to go around. 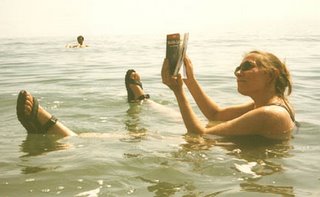 Obligatory Dead Sea float with Marie, 1998
Posted by Marie Javins at 9:31 AM

P.S. Ax, note that I am NOT wearing socks under my sandals in the Dead Sea.

I've heard tell that lots of people trek to the Dead Sea because swimming in it can alleviate chronic skin conditions like psoriasis (got it myself). Just out of curiosity, was anyone doing that while you were there?

That is true. Many people claim that the Dead Sea is good for all kinds of conditions. There were definitely people sitting around caked in mud there.

Anyway, it cured me of some vanity. Never again will I shave my legs and bikini line before donning a swimsuit and going into some of the saltiest water on earth.

I too shaved before the Dead Sea! I'm still smarting... Hotels really should post warning signs in the bathrooms or something.

Loved this entry, by the way. Ax.

PS: I also heard the saline water – 8X the concentration of the oceans' – is good for eye conditions. I spent much of my Dead Sea visit pondering the desperation that would lead someone to voluntarily submerge an already pink eye into those painful waters.