News from the Block 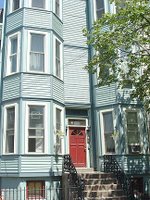 I signed the papers this morning to put my condo up for sale for 4 months at $330,000. The market is flat, so I'm not sure it will do anything.

I'll be devastated if it sells, even though selling it is the only sensible course of action.

If I do sell, my hope is to wait 6-10 months and then buy a small house on the same block. A house with a rental unit, so that my costs are offset.

Cuz I don't want to leave the block. It's an amazing old-time community of stoop-sitters and interesting accents. It does get a little too personal sometimes. As Fran, the grandmother across the street, yelled this morning at Alba, another older woman who was visiting in her housecoat:

"That's what I hate about this block! Everything gets f*cking twisted!"

Fran then kicked a few things around.

That's a poetic way of saying that everyone gets in each other's business and rumors quickly take on lives of their own. In other words, it's a community where everyone gossips, looks out for each other, and 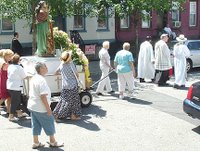 interacts on a daily basis.

The other exciting events that have happened on 8th Street lately include:

-a parade that featured a marching band, Jesus, and the Virgin Mary.
-a flood in the basement of a building just renovated and purchased. (The firemen came. The owner was staring in horror in her nice shoes, so Alba popped out of her flip-flops and offered them to the owner, going barefoot in the rain back up to her house.)
-and Casey and Joanne did a survey of address plaques as they were arguing about whether to get numerals or a plaque for their new front door.

Never a dull moment on 8th Street!
Posted by Marie Javins at 2:46 PM