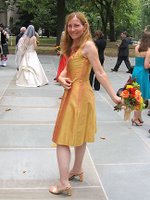 I'm just a few hours from brunch, after which my Best (Wo)Man duties will end and I can go from being in part of a wedding party to being that girl coloring in her JC home-office, the Africa/Marvel girl who wore her bathrobe and slippers as she talked about Yancey eating fried bugs and vomiting on her during a scuba excursion.

There were the obligatory bits--the engagement party in Maryland last month, the bridal luncheon where all the other women knew exactly what to do while I was utterly cluess, then the rehearsal last night. The actual wedding* itself is a blur of me standing on stairs at Princeton U, of signaling Yancey's six-year-old niece, of the sudden thought that since steam damaged my dress, underarm sweat was going to produce an interesting kaleidoscopic effect.

I walked over to the reception to encounter the cheap seats, a table full of my wonderful freaky friends. The tables were neatly divided into the refined sort (representing the bride's end of things), the life-loving New Orleans enthusiastic sort (representing the groom's side), and then there was a lot of hair and uncomfortably shifting large-comic-guys-in-suits-and-wacky-consorts (plus Roberta) at the my-pals table.

The only person on the scene missin' was Turbo, my Aussie ex, a friend to these guys and especially to Yancey. Of all the men who have ever shared my life, Turbo was the only one who easily slipped into my goofy world, because of his appreciation for silliness and bad puns. Babc0ck and Jenn were there to hand me the bathrobe for my stunt, Kraiger posed as my date during the wedding-party-dance, and Ro--who has a bit more class than us and nothing to do with comics but we like her anyway--egged me on. The others--Darren and Dani, Czop and Jess, and Pond Scum--were too busy smoking and cracking jokes out back with Yancey's Louisiana kin to realize anything was happening. 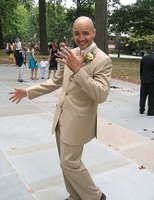 They also missed the Second Line Dance, a tradition where we all waved napkins and followed the bride around as she jabbed an umbrella up and down to the sound of a New Orleans jazz band.

I attended the after-party in fitted silk, leading the bride's mother to note that I owned something girly. I had to explain that I had two modes of clothing: old GAP-style with holes in it, and custom-made girly silk from a Hoi An, Vietnam seamstress. There's no in-between in my wardrobe, since there is also no money.

My pals--including Darren in his bare feet--made it their business to dance until everyone danced. Dani got sick of walking in heels and threw them in the river. Pond Scum outlasted us all, holding up the 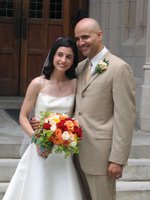 You know what? It was a pain, but the wedding didn't kill me. It was even kind of fun.


*I couldn't take photos as I was in the wedding, but Roberta sent me a few snapshots.
Posted by Marie Javins at 8:15 AM

I'm still glad it's over. I was about ready to throw my shoes in the river too. Heels are not for me.

i just bumped into your blog. wicked cool writing and great humor. you've got it all. keep writing on, and will i will keep visiting. i'm real impressed. rock on.

Do it! Throw ALL heels in any river!