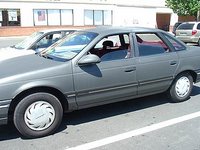 I'm getting a late start after editing Kuwaiti comics all morning, but now I get to go drive Henry the 1990 Ford Taurus to my mother's in Virginia, deep in the Shenandoah Valley.

Henry is an incredible car, acquired in 2002 in Torrance, CA, and named by Turbo the Aussie. Turbo and I bought Henry on my birthday (because Henry and I are both Tauruses, which seemed as valid a criteria as any when going into the crapshoot used car marketplace) for $903 after fees were paid by the seller. The seller had bought two cars at an auction by accident. Since he got Henry—who had been a steadily maintained fleet vehicle—for $400, the seller did all right by us.

We did all right by him too, as Henry took us across the U.S. for May, June, and July. The only problem was that we lost the air conditioning in Austin.

And Henry still doesn't have a/c, which is sounding really unappealing today.

Every time I drive old Henry anywhere, I expect that it's his last trip. I am always astounded that he makes it. After all, he's 16 years old, not young for a car.

I have AAA, the deluxe membership. I hope I don't end up sitting in a hot car by the side of the road somewhere in Pennsylvania, waiting for a tow.
Posted by Marie Javins at 7:22 AM

Henry and I made it! Sure is a long drive.

The car known as Henry the Taurus
Is strong as an old brontosaurus
He has no AC
So it's hot in the city
But at least it's cool here in the forest.

I remember the visit to california when you picked up the car. I would have thought it would be history by now!

The Taurus is a resiliant creature.

The Taurus is a loyal and stubborn beastie. He does love to roam.