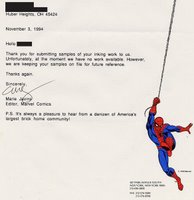 I needed an inker for a fill-in issue of the comic book that I edit. My pal Mark recommended one, and Bobbie corroborated the man's skill and reliability, so I dropped him a line.

Dear Inker Guy:
My name is Marie Javins and I used to be an editor at Marvel Comics and now am editing blah blah blah and so on.

He responded that he was indeed looking for work, but also that I had sent him a letter in 1994!

Dear Marie:
You may not remember, but you sent me the attached letter in 1994, when I was living in Huber Heights, Ohio.

I'd never seen the attached letter before in my life! But clever "me" had gone and made a funny little quip at the end. The gist of the letter was "Thank you for your samples, I got nothing for you, but it's always nice to hear from a denizen of America's largest brick home community."

And then I'd signed it. Except I hadn't. But I knew instantly who did, as did Mark and Bobbie when I told them about it.

Polly, you scamp. My assistant editor at the time had no doubt been going through the slush pile and was trying to amuse herself and the poor souls whose days she was ruining as she rejected their samples. She'd later gone on to a long career in writing some of the wackiest Marvel "Bullpen Bulletins" of the decade. She's currently employed as a successful freelance copy editor, except when she's touring with her band.

I wonder what else "I" wrote in 1994, while cutting a swath across the pile of submissions...
Posted by Marie Javins at 6:50 AM

All Assistant editors should be monitored closely. Didn't you lose your wallet around that time as well?

Why is Inker Guy keeping 12-year-old rejection letters? Marie, be careful; maybe he's into stop-gap-animation style revenge or something.

Hey, I used to send out that same letter, minus the part about brick houses. I wonder if anyone kept any of them.

That was back when one assistant editor got the joy of handling all the unsolicited submissions, in return for the grand and meaningless title of "submissions editor." I inherited a giant closet full of them from David Wohl and my recollection is that, like David, I was always way behind on answering them.

There was a whole system of pre-signed form letters, for kids, writers, pencillers/inkers with promise, pencillers/inkers who were clearly never going to be pros, people too scary to write a friendly note to (they got a super generic one), etc., etc.

Once in a blue moon, I'd find a submission good enough to send around to the various editors for review. I'd guess maybe three or four in the year or so that I handled them.