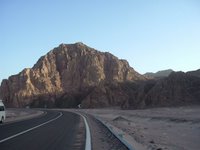 Egypt, no matter how beautiful the coast and amazing the snorkeling, is still tough going.

It's still the only place in the world—aside from the USA-—where a man I'd never met took it upon himself to grope me (no, I don't dress skimpy or prance around in front of a mosque with my belly hanging out and my shoulders exposed). It still vies with India and Istanbul for the title of "most touts per yard." Ethiopia holds a title in that race as well, but not so much for touting as for outright demands on cash.

Don't lecture me. I know I should be more patient. I should consider that there is high unemployment. I should consider that fattened tourists run around by the busload, throwing money away in the face of poverty. I should look at it as a traditional way of life, in which it is a battle of wits and the one with the most patience and chutzpah wins. I should travel with a small group like Intrepid, where tourists encounter some local customs, but are beautifully insulated from the hassles of solo travel, where negotiating taxi fares and hotel fees is simply not the client's problem, but the client is still sensitized to the region through talks and local guides.

But I have to say, it does try my patience to walk over to the Internet place to send a business fax and have three guys try to lure me into their shops by complimenting my ass or my citizenship, to lure me in so that I might buy an essential print of the Sphinx on a banana-leaf parchment designed to look like papyrus ("handmade"). I prefer the restaurant touts, because when they bellow out "where are you from" in three languages, I can walk away and they can't follow. The other guys will follow for a bit, trying to engage me in chat so that I will visit the shop they are touting for. How can they know I have no desire to buy anything that might weigh me down? How are they to know I have been trying to get rid of things for years, not acquire more?

I know that not all of Egypt is like tourist-Egypt. I know that I will not change tourist-Egypt by growling or refusing to play the game. I usually walk away muttering "no, thank you." The most effective answer to "where are you from" seems to be "Kuwait."

"Kuwait?" They say this with surprise.

"Nam." Yep. That stuns them into silence.

I lost the battle of wits to the taxi drivers when I went to and from the airport, which is about a ten-minute drive from Na'ama Bay. 35 Egyptian pounds ($6.15) is the official rate. The opening bid from the taxi driver on the way in was $20. I got him down to $10.

The return battle of wits was lost to a bait-and-switch scam. The driver started by asking for $4.40. Halfway through the trip, it went up to $6.15. But the time I got out of the taxi, I'd parted with $7.77. I was happier losing more money to the first guy because he stuck to his price instead of changing in mid-stream. I assume I'm mellowing since I did not berate the driver or throw the agreed-upon bills at him and angrily storm out of the taxi.

Egypt has had mass-tourism for a long time, and I wonder if this is what has turned the tradition of Arabic hospitality on its ear, or if there's more to it, involving colonialism and occupation. My uneducated guess says this is what happens when you put prepackaged bus tours out there with little explanation of context to the passengers. And Egypt has gotten prepackaged tourists as long as there has been such thing, and had its share of westerners throwing money around since the 1800s. It doesn't make me any less comfortable with people talking about my ass, but on the plus side, it does mean I can expose my calves and ankles without fear of offending, since for every me there are a dozen Italians in hot-pants and heels.

Whoa, what a grumpy blog entry this is! And I've managed to insult both Egyptians and Italians in one go. And my company's Editor-in-Chief is Egyptian, and the mandoub who drives me to work is Egyptian, and either one of them would probably take great offense and smack any man who dared speak of my ass in front of them. The EIC is so sweet, in fact, that he looked shocked once when I told him someone's coloring reminded me of vomit.

I'm on an offending, over-generalizing roll these days.

I actually enjoyed Sharm El-Sheikh, although you wouldn't know it from this screed.
Posted by Marie Javins at 10:47 AM

I for one, have no problem with generalizations. It is, in fact, impossible to make observations without them. I'm not big fan of soft-pedaling ideas with the inclusion of the usual disclaimers--just to make sure we know one is not talking about ALL Egyptians, or ALL of Group X, Y or Z. That should be understood as a given.

Understand why it's unfortunately necessary, tho.

What I want to know is--how come, in all my travels, nobody has ever complimented MY ass? THAT'S the only thing that offends me about all this!

Your ass is much slimmer than mine.

Which is not necessarily a bad thing, given our differing genders.

Well, I've been working out, so maybe I need to plan another trip...

The winner of the most revealing line goes to, "How are they to know I have been trying to get rid of things for years". And thus little grasshopper must keep walking the earth.