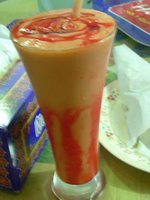 I wanted a falafel or some hummous. But all I could find was schwarma.

Rolla Square seemed to be the Sharjah center of the UAE's subcontinent population. My taxi driver, who was of undefined Arabic origin, waved his hand and said "Little India."

It wasn't so simple. I didn't spot a single curry or dosa near the Al-Sharq Hotel. Just lots of schwarma, being consumed by men in shalwar kameezes. Presumably it was a Pakistani area.

After about ten minutes of hunting for a falafel, I went into the first schwarma place that had an open table and got a chicken sandwich. There was a variety of fruits on display.

"What kind of juice do you have?" I asked my bearded server.

"I'll have that. Cocktail."

He brought me a delicious orange concoction that had red streaks throughout it. The schwarma was good too. The food was two and a half dirhams—just over half a dollar. The drink was twice that.

I'd had a long day of sightseeing and was looking forward to relaxing in my shabby room. I'd caught the bus into Dubai in the morning, and had the pleasure of sitting next to a man who worked for Dubai's municipal bus company. He'd told me how the fleet was being overhauled and had 600 buses, how traffic was a horrible problem in Dubai and a train was being built from Dubai to Sharjah, and how there was no stigma to taking the bus in Dubai.

"It's cheap and they go everywhere," he said.

Later, the bored-sounding narrator on the city bus tour I'd boarded told his audience the oft-repeated tale that water is more expensive than gas in the Gulf. It's true, although it isn't as insane as it sounds. I remember gas being under a dollar a gallon in the mid-80s when I lived in Texas. That's cheaper than a gallon of bottled water.

I sat on the bus a lot, saw a faux Egypt that was actually a high-end shopping center, and realized I had nothing appropriate for hot weather (Kuwait was a little chilly in January and is more conservative so I have only long sleeves and cover-y things). I bought a $12 pair of sandals at Carrefour in Deira City Centre and asked the cashier to cut off the tags so I could wear them out.

I headed back to Sharjah and wandered through an upscale souk. I went into shops a few times, and engaged the shopkeepers in extended conversations. Once they realized I wasn't going to buy anything, we'd have good chats. A man from Bangladesh tried to sell me a carpet from Esfahan. He laid off that once I told him I had a perfectly fine carpet from Esfahan at home.

He was silent. I wasn't supposed to respond that way. I felt guilty. He was just trying to make a living.

"But it's different because I bought it in Esfahan. So I got a very good price."

His face brightened. He stopped asking me to buy a carpet and talked about marriage in our different cultures.

"Divorced." I've recently realized that saying this makes people feel sorry for me and then they are unlikely to get fresh.

"Let me ask you: how many boyfriends have you had?"

"More than one." I dodged the question.

"Ah. This is a better way. This way you really know the person and you know if it will work out."

I told him he was wrong. It doesn't make it any more likely to work out. We had a nice chat and I moved on. I needed to get some sleep as I was heading to Sharm El-Sheikh early in the morning.

UAE is really cosmopolitan. It made me realize how we're small-fry on many levels in Kuwait. Dubai has an indoor ski slope. We've only got an ice rink.

But sometimes an ice rink is all you need.
Posted by Marie Javins at 1:12 PM

Yet you couldn't find anything to do in Jersey City. Hmm... I bet there is an ice rink there.

I'm not so sure about that. But we do have some terrific Italian delis and some scenic industrial wasteland where the railroads once brought in the masses to be ferried to NYC.