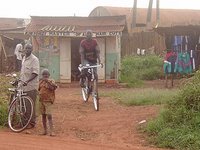 Everyone knows I'd usually rather be in Uganda than Kuwait.

But not right now, even though there's nothing real appealing about my office life at the moment (save for the miraculous luck of being out of the car wash office and in a little pocket universe of civility where people actually like each other).

Why would I rather be working a day job than zipping around Kampala on the back of a moped?

Because tomorrow is election day in Uganda, the most tightly fought election in, well… before President Museveni, the place had a bad run of military takeovers and crazy dictators, so I guess it would be the most tightly fought race since independence. But then I might well be guessing wrong since my awareness of Uganda is limited to modern times.

Let's review:
Pres M has been in office since 1986, when he seized power from a short-lived military coalition that had taken over following the ousting of the Obote administration, which might have been repressive and bad but there does seem to be some debate as to HOW bad. Obote followed up Idi Amin, so by comparison, it would be hard for him to do anything as rotten as feed his enemies to crocodiles and put heads in the 'fridge to scare the daylights out of opponents. (Rumors of cannibalism are unsubstantiated, although he clearly liked to encourage the rumors.)

Pres M led the country into stability, no small feat after the madness of the previous decades. For a long time, Uganda was a model economic success story as well as being a success in the fight against HIV. Then things changed a bit—on the HIV front, for whatever reason, the administration started advocated abstinence instead of condoms and education (uh, yeah, that'll work). The long-running war in the north got worse and worse, to where even people I peripherally knew or relatives of friends were killed.

And then there was the small matter of term limits in the constitution of Uganda being altered in order to allow Pres M to run again.

In 2001, I was briefly in Uganda but I was a clueless backpacking tourist, utterly unaware there was an election that year. But Dr. Kizza Besigye—once Pres M's personal physician—ran a campaign in which he garnered some votes. Not enough to win, but enough to be noticed.

Besigye went into exile right after the election, and within a few days of his return in 2005, he was arrested on charges of treason and rape. He was held for ages, while the international community demanded explanations. The treason charges have not yet been substantiated. The rape trial was impossible to make sense of (I read the transcripts on the Daily Monitor site). I am not qualified to say if the charges were trumped-up or not, although their timing is suspicious. The campaign, likewise, has produced no evidence as to who would be a better president, Museveni or Besigye. It's been a campaign of vendettas and personalities. As in most elections at home, genuine agendas and opinions are obscured by sound bites and media moments.

So who would be a better president? I couldn't say. Part of me assumes that stability is the best course, but there's the other part of me that knows that term limits should not be rescinded even if FDR or Thomas Jefferson were suddenly resurrected. No matter the outcome, there are sure to be accusations of poll fraud and intimidation. Things haven't been going well… tear gas was used at an opposition rally, an armored military vehicle killed some Besigye supporters, there were massive protests when Besigye was in jail and cars were burned.

I assume Museveni will win either by popular vote or other methods, and I also wonder if perhaps it's for the best if he does win. But no matter who wins, it's going to be ugly. The question is how ugly. Now is probably not the worst time for me to be sitting in an office in Sharq, Kuwait City.

Update: Museveni won. There are allegations of election irregularities, but the margin seems big enough that he would have won with or without help. Let's see if he does anything about the LRA now.
Posted by Marie Javins at 2:06 AM

funny, how we all got involved in making metaphors, but (except for Marie) we can't seem to get worked up over the elections in Uganda. Even though we could take it as a metaphor for how messed up elections are in the rest of the globe.
Is a messed up election better than none? It depends... we could vote on it ;-)