A Snorkel A Day 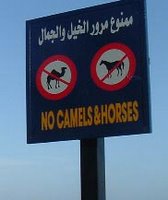 "There is one more thing," said the hotel attendant at the Kanabesh Hotel's private beach. He'd just outfitted me with a mask, fins, and snorkel for my half-day trip to Ras Mohammed National Park.

I stopped and waited apprehensively. Whatever he was about to say, I knew I didn't want to hear it.

His voice lowered and his face softened into what I assume was his "seductive" phase.

"You are very beautiful."

"Thank you. Good-bye." My voice conveyed no surprise or embarrassment. I trotted up the steps to Reception.

This must not have been the response he expected, because after a moment he yelled after me. "And you know it too!"

This gave me pause. What if it wasn't a line uttered to every female who crossed his path as I assumed it was? He was about 23 years old. Could he have mistaken me for someone within a decade of his age? There was no way he meant what he said. He'd say this to a single female baboon if she came onto his beach, right?

In case he'd meant what he'd said, I shot back "I'm much too old for you." That stunned him long enough for me to escape to the mini-bus bound for the tip of the Sinai Peninsula.

Ras Mohammed National Park was declared a protected area in 1986, and that's about all I know about it because my guide sucked. (The following day's guide on my trip to St. Katherine's Monastery was no great shakes either.)

We had seven Germans on the Ras Mohammed trip, and they complained that they'd been promised a German-speaking guide. I told them they were missing nothing, as the guide's narrative seemed to be limited to "1986" and "we will stop here so that you can rent wetsuits from my friend." They lucked out though. I was called upon to translate to them that the German-speaking guide was sick, and they would be compensated with a free glass-bottomed boat trip the next day. The Germans were pleased. I wished our English-speaking guide had been ill as well.

In 1998, Yancey and I had gone snorkeling with Camel Dive Center. They supplied everything—mask, fins, snorkel, life-vest, wetsuit, lunch—for 40 euros. I thought I'd gotten a bargain this time by paying 20 euros to snorkel from the national park shoreline, plus I'd get to see the eerie sand-scape formations on the Sinai.

I outsmarted myself on this one as the operator nickel-and-dimed us with extras. It was extra to rent the wetsuit, extra to rent the snorkel gear from the hotel, they didn't supply lunch, and so on. I'd say "AWA, Africa Wins Again," except that the Sinai, I believe, is technically part of Asia.

I suited up and swam out at the first snorkeling stop, a flat sandy area where the sun blazed down. Now I could see some of those colorful fish that Scarf'lonius had been raving about, and I could admire the famous Red Sea coral as well. I clumsily backed in wearing my hotel fins. I spat in my mask, rubbed it around the goggles, held the snorkel in my mouth, and put my face in the water.

And got a mouthful of salt. Bleh!

I adjusted my snorkel and tried again. More salt, enough to bring my head out to the surface with coughing and sputtering.

I tried a few more times with the same results. My snorkel was busted. There was a hole in it somewhere. I paddled around on my back a little, then—disappointed—went to shore.

By the time we reached the next snorkel spot by the visitor's center and museum, I'd found the leak. I paddled out, covered the leak with one hand, held my disposable underwater camera with the other, and stuck my face in.

Wow! An incredible sight lay right off the shoreline. The coral dropped away suddenly to a deep pit of sand. Fish of all shapes and sized darted in and out of the reef right under me. The blazing sun lit it beautifully. I was missing nothing by not diving at Sharm. It was all there right under my nose.

I was so amazed that I forgot to hold my hand on the snorkel's hole, and had to leave the wonderland long enough to breathe and get a firm grip on the snorkel. I wouldn't make that mistake again. I stuck my head back in to admire a yellow-and-silver triangular fish, a rainbow-striped bass-like fish, and lots of little darting silver things. The coral was brown in the shadowed parts, but had reds and whites where the sun hit it directly. The bumpy and ribbed textures were as unique as the colors. The sea glistened right above me. Spectacular!

I couldn't stay too long as I didn't trust myself not to suck in saltwater, but it was as awesome as I'd remembered it being.

It was have been easy to just rent the snorkel gear and get a taxi to the visitor's center. And a lot cheaper. Next time I'll know, except next time I'll be going with Camel Dive Center. If there is a next time. There's still plenty of the world to see and twice might well be enough for Sharm El-Sheikh and the Sinai Peninsula.
Posted by Marie Javins at 12:01 PM