Screams, howls, and whistles echoed through the streets of Sharm El-Sheikh, a resort town on the Sinai Peninsula in Egypt. 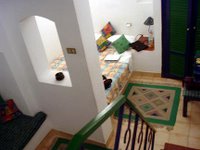 Was I scared? Hadn't two resorts been bombed in 2005? Wasn't Egypt the place where Greeks were mowed down on the steps of the Egyptian Museum, where tourists were slaughtered en masse at Luxor? No, I wasn't scared. I was relieved. The howling meant that Egypt was playing Ivory Coast in the African Cup of Nations soccer match. Consequently any Egyptian who did not work at a hotel or restaurant was crowded into a sports bar, or even watching the large screen TV outside Sanifir Hotel, staring raptly from the pedestrian-only street.

No one was touting. No one tried to sell me a perfume bottle or a papyrus or a shisha (hookah/water pipe). I walked unaccosted through Sharm, as I'd done during my first visit in '99, when Sharm had been less developed, but more importantly, Egypt had not recovered from the tragic massacres. The tourist industry had been decimated when Yancey and I had caught the ferry from the mainland and stumbled onto the charming Kanabesh Hotel in the middle of quiet Na'ama Bay.

There was nothing quiet about Na'ama Bay anymore and Kanabesh had gone way up in price. Even after aggressive haggling, I still paid more than twice the $20 we'd paid for a double in '98. I could have stayed at Tropicana Rosetta resort for $29 a night through hotelpronto.com, but the Kanabesh is a local hotel deep in the center of the action. It has its own private beach and the rooms are atmospheric, multi-level, whitewashed mazes. Each had a balcony and as part of my negotiations, I got one overlooking the Red Sea. The hotel is comfortable rather than modern, and the bathrooms all have a distinct moldy sewer odor emanating from them. I also discovered that if I stood on a bench on my balcony and faced south, I could swipe free wi-fi off of Sanifir Hotel across the pedestrian street.

The only problem—I discovered the next morning as I got up early shave my legs before a snorkeling trip to Ras Mohammed National Park—is that the water in the shower never really gets hot. Which is probably a lovely thing in the height of summer. But I think I scraped off a fair number of goosebumps in addition to hair as I prepared for my day of snorkeling.
Posted by Marie Javins at 12:04 AM